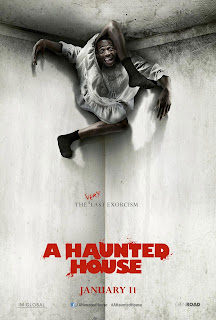 
Synopsis taken from IMDb
Malcolm and Kisha move into their dream home, but soon learn a demon also resides there. When Kisha becomes possessed, Malcolm-determined to keep his sex life on track- turns to a priest, a psychic and a team of ghost-busters for help.

STORY: Marlon Wayans gives the horror-spoof genre a go on his own in this film,without his brothers Sean and Keenan Ivory Wayans. In this film, like all the other Wayans films, it's laced with jokes with the butt end being racial or potty humor. This film is shot in POV mode with a camcorder, just like in the Paranormal Activity movies. Malcolm (Marlon Wayans) lives on his own in with his dog and maid, Rosa (Marlene Forte) and he decides it'd be a good idea for his girlfriend Kisha (Essence Atkins) to move in with him. Upon her arrival, Malcolm starts to immediately wonder if his friends were right in telling him not to go ahead with the move. Most importantly, he's not getting laid and that sets him off.

Kisha mentions she's been hearing noises and at first Malcolm doesn't believe her, but he becomes convinced. They call upon a Psychic for advisement on what is haunting their house. Chip the Psychic (Nick Swardson) comes to their aid and is more caught up in his crush on Malcolm than the haunting.

Things get even worse when Kisha becomes possessed, and Malcolm calls upon "The Ghost Guys", a team of wannabe ghost hunters and a Priest named Father Williams (Cedric the Entertainer). As they all try and help, they none seem to able to do anything effective.They're in over their heads.


HUMOR/LAUGHS: This movie is laugh out loud funny. The whole theater was in hysterics! This movie didn't let up with the humor and it was pretty funny the whole way through. Cedric the Entertainer was a show stealer as Father Williams, his scenes were cracking me up. He was a good addition to the cast.

SPECIAL FX/STUNTS: The effects in this movie were cheap gag jokes that you could tell didn't cost a lot, but that makes it funnier. The point is to see how they react to the bizarre events going on, that's where the real funny stuff is. There was a lot of cgi used in this movie for some of the gags and other scarier elements of this film but nothing fancy.

OVERALL: If you go into the theater expecting a Christopher Nolan or Francis Coppola film, and judging it on the terms of being a "good movie" than go see something else. The people making this movie knew exactly what they were doing, going of an over-the-top funny movie full of raunchy humor and sterotyping. They aren't concerned with winning an Oscar. Judging this movie on a fair grounds, being that it's a movie meant to entertain you and make you laugh, it's a total blast. I can't wait for it to come out on Blu-ray.