The Haunted Trailer will have you Laughing Out Loud 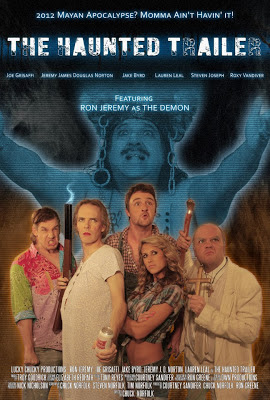 Synopsis taken from IMDb
Two goofy hick brothers (Elvis and Aaron), their crazy redneck Momma and sexy sister (Prissy) must exorcise their mobile home of an ancient demon set free to fulfill the 2012 prophecy, with the help of a low rent TV evangelist named Reverend Wiggems, or the world will end. A Raunchy redneck comedy/horror.


I first watched this film last night, at about 3:00 a.m. Seeing as I knew this was going to be funny, I made sure the mood and setting was right. I can honestly tell you that I was laughing 2 minutes in...

The thing about this film, is that it doesn't take itself seriously. If it did, this film would have a whole other effect. However, Chuck Norfolk knew what type of movie he was making. He wasn't aiming for Oscars. This is a true horror-comedy that comes off likes something you'd catch from Full Moon Features. It's very cheesy in a deliberate way, and stacks up the laughter.
I've always been an avid fan of dirty, fart and crap jokes, and this film is full of flatulence and feces. 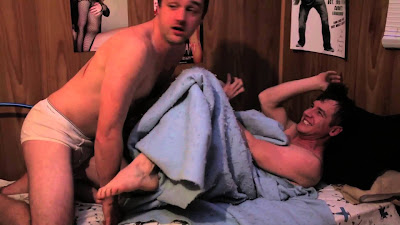 The fact that Ron Jeremy is in this film cracks me up. I always heard that he's a nice, funny guy, and now I've seen it for myself. Ron Jeremy haunting your house as an Indian...ridiculous...but hilarious! Joe Grisaffi had me laughing the most, his performance as momma was funny as hell. He has so many great lines, but my favorite has got to be "smells like cocoa butter and burnt pine cones."

When Reverend Wiggems comes into the picture, it becomes even more over-the-top than before. His attempt at exorcising the trailer is absurd! I always enjoy a movie that's meant to be pure entertainment. It really is enjoyable from beginning to end, even if you're only interested in the humor aspect of the film. Fans of comedy and or horror, will find something for them in this movie.

The acting is overdone, and can be annoying, but it's totally acceptable because this is that type of movie. Clearly, no one was aiming to steal the show, they were just playing dumb, ignorant red necks and they did a good job. They all have moments that'll cause you to laugh to aloud. 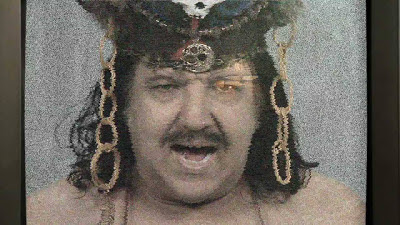 The best part about this film is waiting for Ron Jeremy to appear! I was eagerly awaiting his next appearance, because he always shows up at the best moments and does or says something that will make you smack your head and laugh. There's a dance scene towards the end that I found quite amusing, I laughed hard.

All in all, this is a very enjoyable film. It's got a little something for everybody, and it's good for a lot of laughs. Keep your eyes open for this one when it lands, you really shouldn't miss this one. It's not a perfect movie, but it's a damn entertaining one! Pure entertainment.