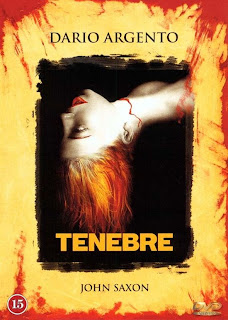 Another film by Dario Argento that I've finally gotten aroud to watching. This was better than the other films by him that I've seen, but I'm still just not immpressed.

Some of the kills were really good and the gore was done very well but what ruins it for me is the damn music that played throughout the movie. The music isn't scary, it's annoying and it's used as a means to add intensity to the scene and instead makes you just want the scene to end. The acting was terribly bad also, but i can forgive that seeing as I grew up on 80's horror and 90% of 80's horror is bad acting.

Synopsis taken from IMDb
With Argento's trademark visual style, linked with one of his more coherent plots, Tenebrae follows a writer who arrives to Rome only to find somebody is using his novels as the inspiration (and, occasionally, the means) of committing murder. As the death toll mounts the police are ever baffled, and the writer becomes more closely linked to the case than is comfortable.


I'd give this movie a 2/12 stars. Not great but not terrible. View the trailer below.