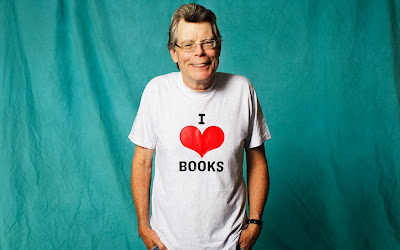 NOTE FROM GRIMM:
The following post was intended to be posted Saturday on Stephen King's birthday. However, it's late on my end due to lack of internet connection the past few days.

On the 21st, Stephen King will be turning 66, and by the looks of it, he’s still going strong. Sure, the famed horror author has attempted to retire in the past, and the injuries he sustained after being hit by a vehiclist has made it physically difficult for King to sit and write for extended periods of time. Nevertheless, King has forged ahead. Dr. Sleep, the long awaited sequel to The Shining, will be released just days after his birthday, on the 24th. Not only that, but a second film version of King’s Carrie will hit theaters just a week before Halloween, on October 18th. The new film will star Chloë Grace Moretz, the young scene stealer from Kick-Ass and Kick-Ass 2. We can hope, too, that if Dr. Sleep proves successful, it too will eventually make the jump to big screen. King’s work has a long history of film adaptations inspired by his novels.

Here’s a look at some of the best film adaptations of King’s writings: 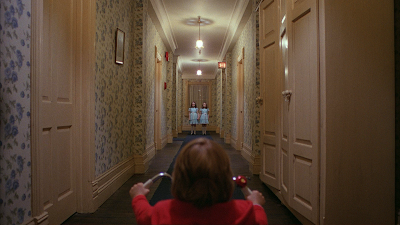 It’s true, Stephen King himself was not a fan of this film. He felt that the work downplayed the supernatural elements of the the story in order to highlight Jack Torrance’s insanity. And King felt that even Jack Torrance’s descent into madness was botched - since Jack Nicholson had already built a reputation playing mad men, Stephen King felt audiences would easily predict where the plot was going. But despite King’s complaints, and the lukewarm critical reception the film received upon it’s first run, and the fact that the film wasn’t entirely faithful to the book (i.e., there are no supernatural hedge animals in the film, and Jack Torrance’s death is switched from a heated boiler room to the freezing hedge maze), the movie is heralded today as one of the best horror films of all time. The film features many memorable scenes: the rotting old lady in the bathtub; the mutilated twins in the hallway; the blood pouring out of the elevator. Fans of the supernatural aspect will be delighted to know that Dr. Sleep will feature young Danny Torrance grown up, still using his abilities on a daily basis.

Forget Herbie. The most memorable living car came from Christine. Only Stephen King could write a story about a murderous, possessed car without producing something accidentally laughable. However absurd the premise may sound, Christine works, and the red and white bloodthirsty Plymouth is truly terrifying. It’s a testament to King’s popularity, the film was already in production prior to the book’s initial release. Kevin Bacon was originally offered the lead role in the film, but he opted to star in Footloose instead. King revisited this trope in later works, but they’re hardly worth viewing; Trucks and Maximum Overdrive don’t really stand up to this tale of a serial killer vehicle. 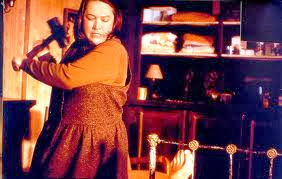 Misery marked the beginning of an excellent working relationship between Stephen King and Kathy Bates. The book follows an author, Paul Sheldon, played by James Caan, who survives a car crash only to be kidnapped by an obsessed fan, Annie Wilkes, played by Bates. Annie then hides the author in her home in order to torture him and she forces him to write for her. Kathy Bates did such a phenomenal job of playing the terrifying, stalkerish Annie that King began to write roles specifically for Bates. Another notable collaboration between the two was the film Dolores Claiborne, starring Bates in the titular role as a New England woman who murdered her abusive husband to protect her daughter. 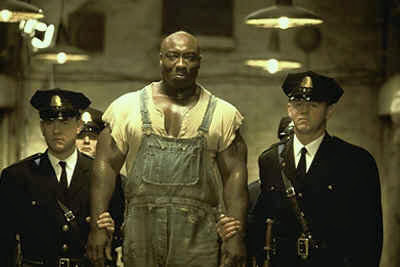 This one is a bit of a departure from the rest of the list, as it’s hard to classify as a horror film, since both the novel and movie have the tendency to tug on heart strings. Regardless, this is one of the most emotionally complex and enriching pieces of writing from King, and it translated to the screen beautifully. Then, John Coffey, played by Michael Clarke Duncan, opens his mouth, a swarm of bugs pours out, and we remember that he’s on death row and two little girls have been raped and murdered. The Green Mile induces a fear quite similar to Misery, a fear that spurs from the wrongdoing of other people, and the horrible unfairness that can get someone killed. The film was an important one also for Tom Hanks, who played prison guard Paul Edgecomb. Edgecomb discovers both Coffey’s innocence and his supernatural abilities, but cannot save him from his unfortunate fate. 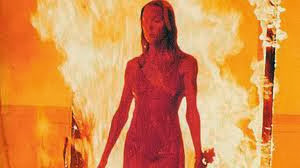 Carrie not only shot Stephen King into the limelight, it was also the first film Brian De Palma directed. Sissy Spacek originally played Carrie, the geeky telekinetic who falls for a grotesque practical joke at the hands of her high school classmates. In an extreme response to her humiliation, Carrie destroys the town using her newfound powers. Carrie in the book was described as being overweight, but in typical Hollywood fashion both Sissy Spacek and Chloë Grace Moretz are more appealing to the camera. While Piper Laurie offered a harrowing performance in the original film as Carrie’s mother, Margaret White, the new film has Julianne Moore filling in for Laurie (and rumor has it that Jodie Foster was initially considered to play the part.) We have to wonder whether the film will follow it’s predecessors twist on the ending - leaving the parents alive to grieve - or if the second version will return to the book’s original ending which saw Carrie’s entire town burned to the ground.