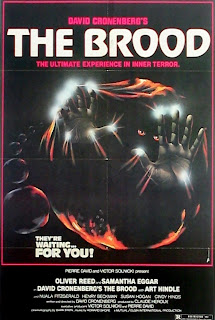 
Synopsis taken from IMDb
A mans wife is under the care of an eccentric and unconventional psychologist who uses innovative theatrical techniques to breach the psychological blocks in his patients. When their daughter comes back from a visit with her mother and is covered with bruises and welts, the father attempts to bar his wife from seeing the daughter but faces resistance from the secretive psychologist. Meanwhile, the wife's mother and father are attacked by strangely deformed children, and the man begins to suspect a connection with the psychologists methods.


Knowing this film wasn't just any film but a David Cronenberg film really got my blood pumping. For those of you who are familiar with Mr. Cronenberg you know that this guy directs the hell out of some movies. He is a genius of horror. His horror is different than typical horror, he goes crazy with his films. I always liked to think of his films as acid trips on film. His ideas are totally off the wall but brilliant, and just demented enough to work.

I first became a fan of David Cronenberg as a child, I was probably around ten years old when I first saw his amazing remake of The Fly (1986) and it blew me away. It scared me but it enthralled me. I became obsessed and it still remains my 2ND favorite Sci-Fi movie ever, my first being Aliens (1986). 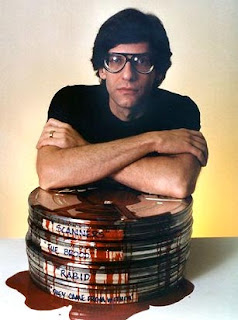 So I had a rough idea of what I was getting myself into with The Brood, and I was more than ready to experience yet another Cronenberg masterpiece. And I wasn't let down.

From the beginning of the film I got the vibe it was giving off and could tell right away that this was going to be a layered story and probably have some twists to it. The music set the mood well kept me focused and trying to understand what was going on and who was committing the murders. When all of the main people who could be considered suspects aren't the ones at fault, I started to sense Cronenberg working his mindscrew tactics to build up what would ultimately be a gory and disturbing truth.

To sum it up Nola Carveth (Samantha Eggar) has been focusing her anger and emotion into physical beings of deformed children who seek her revenge on anyone who's caused her any pain, including stemming back to her childhood. When these creepy children show up the crap hits the fan. 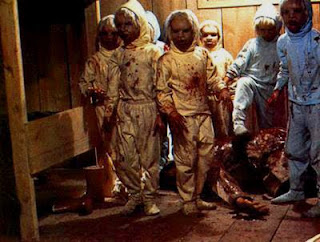 After one of the children dies and the lead characters come to inspect the specimen they find that it has no bellybutton and thus it is not human, nor naturally born. We also discover that they have a sack on their backs in between their shoulder blades that holds their life fluid. When the sack dries out the children die.

This leads to an unforgettable finale where Nola is confronted by her husband Frank (Art Hindle). Upon 'airing their dirty laundry' the bloody truth comes out showing us what real horrors have been going on behind the scenes the whole time. It's just sick and twisted enough to accomplish a profound conclusion. 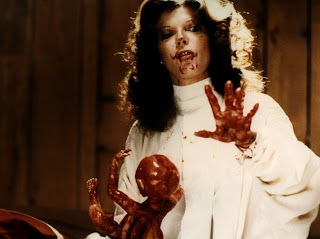 The best part and the hardest part are the same scene. We watch Nola reveal the sack hanging from her stomach that is her means to give birth to her deformed and manifested children. Very serious scene that takes you aback.

However in the head of conflict, to reveal how sick and disturbed she is she bites into the sack so she can dig the infant out...and she then proceeds to lick it clean like a cat. True Cronenberg for you, you never leave  unsatisfied and you he never ceases to go where you wouldn't expect. 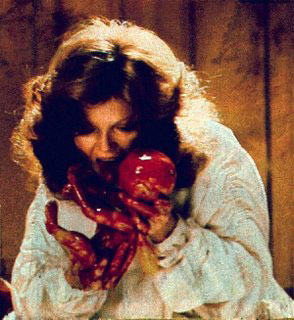 So without giving too much away for those of you who have yet to see this, I'll cut this short. But I suggest you give this movie a shot, you have nothing to lose. Sit back and let yourself be shocked.

This is one of Cronenbergs best films and I think I even liked it more than Scanners. I liked Scanners alot. The Fly remains supreme however, I believe that to be David Cronenberg's true mark of greatness. 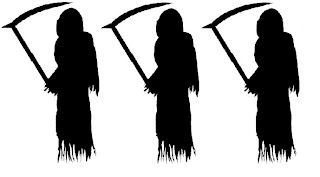