So yeah, I'll admit it, I've been living under a rock my whole life. One thing I will never understand though, is how this film passed me by. How have I possibly tiptoed around it this long? I have no clue. You'd think that with me being an 80's horror nut, that I'd have seen this several hundred times over by now. Truth is, I just watched them last week for the first time. And since they're new to me, they deserve the review treatment.

Since I'm reviewing the whole trilogy, this is a condensed review, summing up what I thought of all three films. Honestly, I fell in love the with the first so fast that I watched the other 2 in the same day as well. I banged out the trilogy in just a few hours. I may have been behind, but I caught up quick! 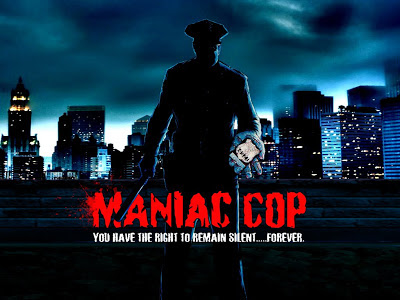 This is one of the films that I knew I was going to love from the second the credits rolled. The music said it all to me, and I knew what type of film this was going to be. I loved the story of it, the cop being murdered in jail, and set up by politicians. Only to return to the streets seeking revenge on those who wronged him. Great concept, awesome effects and kills, eerie and Bruce Campbell is in it. Enough said. This film is pure 80's gold. 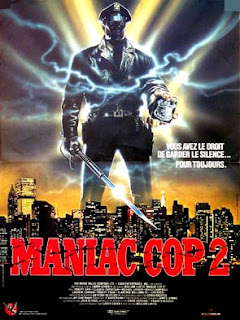 I was surprised to see how good of a sequel this was! I totally loved it. While it didn't capture that lightning in a bottle that the first one did, it did live up to it's predecessor. In more of a leather'd out look, Maniac Cop returns to wreck havoc again. The story to this one was of good quality, I was glad to see the story didn't falter for a sequel. The ending when he's on fire, taking out the inmates who ruined him is amazing. That scene will be going though my head for the next few days. 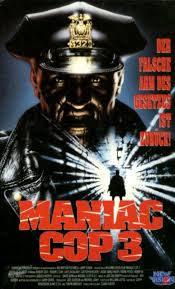 Although not living up to the previous 2 films, the third film in this series doesn't disappoint. I loved the opening sequence of this film! Though the story was finished with part 2 and should have been left that way, this movie still kicked all kinds of ass! They overused the fire thing I liked about the 2nd film. They showed too much of it, revealing how fake it is. At this point they were out of ideas, but gave it a shot anyway. Not a bad film, but the worst of the series.

In conclusion, if you haven't seen this movies yet, and you're able to, see them ASAP. They're seriously awesome movies. I watched my parents VHS tapes, but I'm going to be buying these on DVD, and soon. And for those of you that didn't know, these films are made by William Lustig, the director of "Maniac". Kinda funny the word 'maniac' is used in these films' titles as well.
Posted by Drew Grimm Van Ess at 12:52 PM