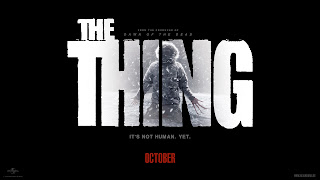 First Thoughts
This film is actually a prequel based on the 1982 John Carpenter film with the same title. It doesn't really make too much sense to me why they didn't title it different like The Thing: The beginning. It's kind of stupid if you ask me, to title the prequel the same. But seeing as I'm a huge fan of the John Carpenter film I was stoked to see this movie. And I could only hope that it lived up to the 1982 masterpiece...

Now this film was directed by Matthijs van Heijningen Jr., I don't know too much this guy has done so my initial thought was that I didn't know what to expect. It was either going to work or not, using a director who's not well known is always a gamble. However, the producers of the Dawn Of The Dead remake did this film so that gave me some hope. I thought the remake of Dawn Of The Dead was great, big fan.

Story Plot
This film is the origins of The Thing, it's the backstory of how it was found and how it escaped to wreak havoc in the 1982 film. This takes place with the team of Norwegian scientists finding a hot spot on their radar coming from under the ice of the cold Antactica.

After digging The Thing up from underground and seeing it in basically a huge icecube it's hard to really get a look at it through the thickness of the ice it's frozen in. I liked the fact that they didn't just show you the creature, you had to wait for it and just hope it was as good as your imagination envisioned. However, I didn't envision it to look like the way it did but I was pleased with it.

After showing you what The Thing looks like as it breaks free from its icy chamber caos ensues. We find ourselves in a guessing game of who is who when the team discovers that this alien can transform into any living creature, including them. This was alot like the Carpenter film to a certain degree but they go with a teeth test instead of a blood test like in the 1982 film. They start sorting out who's The Thing and who isn't by checking for teeth fillings, which back then were shiny silver and not white by today's standards to match your teeth. They do this because they discover that when immitatting things The Thing rejects any and all metal objects, therefore, anyone without fillings are suspects. I think that's the one time in your life where you'd be happy you drank alot of soda.

The film from here goes into everyone against everyone, because the people without fillings are raving that the others are crazy and are going to get them killed if they don't let them in their group. Here is where the conflict lies because that's a crappy situation you been in and you don't want to be the person accusing someone of being an alien and cause them to get killed by an alien (laugh).

After that the few members who are left of the team hunt down and search out the alien and put it out of it's mysery...or do they?

Special Effects/ Creature effects and design
I thought that the way The Thing itself looked when it broke out of the ice was pretty cool. Like I stated before, it wasn't what I was expecting but it was still a cool design. It looked alot like a menacing bug. A big black insect with sharp legs.

I also liked the way some of the other effects look but I feel that they dulled it down with bad CG, so that was disapointing. I also think they showed too much of The Thing and it's transforming ways. I would have liked it more if they showed it less to keep it scary. The more you see it the more used to seeing it you become. So the more you see it the less scary it is. Do glimpses or momentary shots to keep the suspense and mystery going. Not long drawn out shots like they did in this film.

I liked the two-headed Thing, it looked very close to the one they showed in the 1982 film. But they ruined it with the long scenes they did showing it. After awhile it just kind of showcased how bad the CG was and made is disapointing.

Final rating for the movie is
CG/Creature effects get a 2/4 rating from me.

Actors And Characters
This film has a pretty good cast although I think that for this movie, if they even wanted to try and live up to the Carpenter film, could have been better. There was definately room for improvement.

I think that Mary Elizabeth Winstead did a good job as the lead role but they should've gone for a stronger leading role.

I also wasn't a fan of  Eric Christian Olsen. I usually never am though.

Casting/Characters gets a 2/4  rating from me.

Gore/Violence
The gore in this film was pretty decent, they definitely didn't go over board with it like most movies tend to do today.

The violence was pretty good as well but nothing memorable from either the gore or violence.

Most memorable quote
"So, I'm gonna die before I floss?"

Final Thoughts
I started off really liking this film but as it went on it got progressively worse. I didn't like how much they showed the alien and I didn't like the ending at all. The spaceship scene ruined the whole movie for me. I thought it was utterly ridiculous. They showed too much ruining most of the mysery and making the movie a failure in comparison to the Carpenter film. This film had potential but I guess this is what happens when you get a weak cast and a unfamilliar director.

The movie overall gets a 2/4 from me.

Posted by Drew Grimm Van Ess at 4:03 PM No comments: