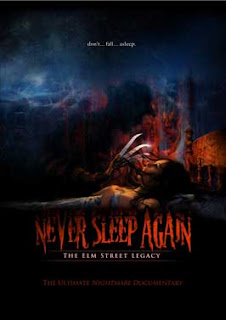 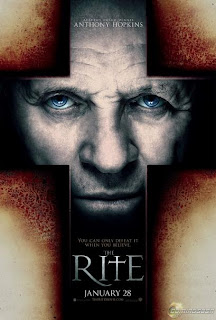 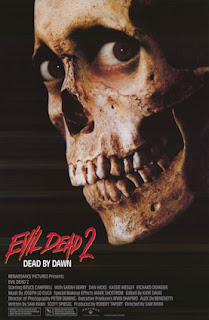 The action figure and collectible company, Neca, has announced that they landed the rights to make action figures from The Evil Dead 2! They said they're in the sculpting stage now and that we should see some prototypes at this years comic-com. And that we probably will see two Ashes and maybe a Henrietta and a few other characters.

Now I don't know about you but I am freaking out, I was so happy when I heard this news because there has never been collectibles made from the first or second Evil Dead movie (atleast not officially licensed products). So these are must haves and as those of you who collect know, Neca is a great company and makes great products, I own several hundred dollars in their products and so I will be getting these as soon as they're avaiable. Neca + Evil Dead 2 = hell yes. Just take a look at they're Army Of Darkness figures and you'll know what to expect.

I hope we get an evil Ash or atleast an Ash with the possessed hand. 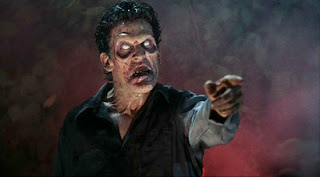 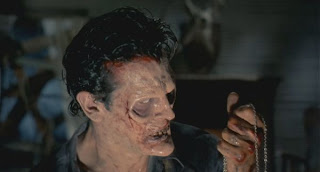 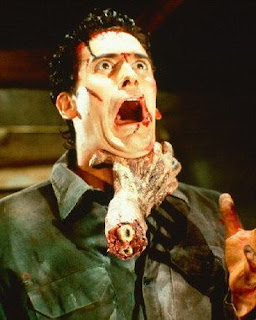 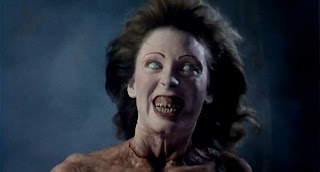 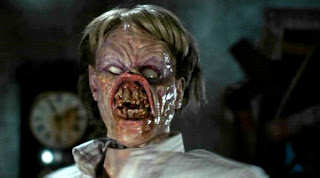 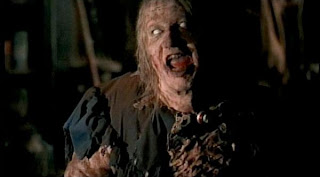 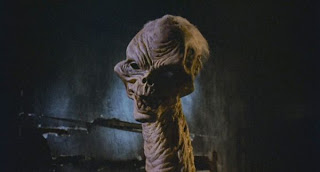 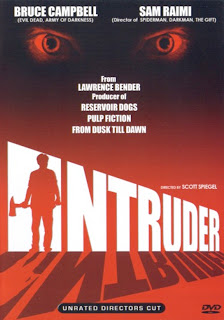 I've seen this movie several times and loved it. However it wasn't until last weekend that I've owned it and thus rewatched it. It had been a few years since I've watched it, so watching it again was like watching it for the first time. The gore and kill scenes are brutal. Hardcore. I loved it.

Although let me warn you that the fact that Bruce Campbell and Sam Raimi's names are on the cover is only for publicity and promotion. Bruce Campbell is in the movie maybe all of 2 minutes. Sam, on the other hand has a small part, but still has a part unlike Bruce Campbell. So don't run to see this thinking it's a Bruce Campbell flick, it's not. Watch this movie if you want to see a good old fashioned slasher film.

Synopsis taken from IMDb
The ex-boyfriend of a check-out girl at a supermarket returns at closing time to make trouble. They quarrel and the boyfriend is ejected from the store. After they lock the building up to take inventory, the employees start dying off, and the survivors must eventually find a way to escape with their lives.

3 stars for me. Now, the trailer gives alot away about the movie and it's twist. Cheaply made trailer. So I don't advise you watch the trailer but I'll throw it in there for those of you who want to watch it anyway. 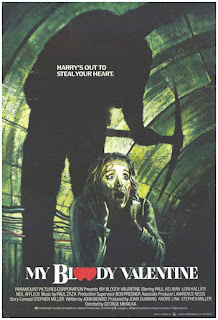 I thought I'd take the time to review one of my all-time favorite horror and slasher films, My Bloody Valentine.

This movie came in a double feature DVD I got with April Fool's Day (1986) and it became one of my favorites instantly. It wasn't cheaply made even though it had a small budget, the acting is great, the story is fresh and original and the killer is badass. It was on of those rare movies that hasn't really been immitated (or atleast successfully immitated) and I was surprised by alot of things when watching it. It wasn't predictible.

The remake wasn't so horrible but it didn't touch the original. This is one of those gems in horror that too often get overlooked. For those of you who don't know there is a director's cut DVD out there with 3 minutes of addtional footage added in, all of which is said to be deleted kill scene gore that would've landed the movie an X rating. I haven't seen the director's cut yet but I sure as hell plan to.

Synopsis taken from IMDb
There's a big valentine-party planned in the little coal mining town of Valentine Bluffs, Nova Scotia. It is the first Valentine's Day party in 20 years, because then there was an accident in the mine, and the accident happened because the men responsible for the security was at the party. The sole surviving miner, named Harry Warden, later killed them, and told the town NEVER to arrange a Valentine's Day party again. The party begins, and so does the killing...

3 1/2 stars for me. Horror gold. Check out the trailer below. 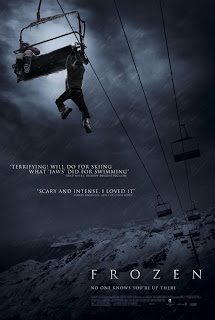