The Lords of Salem is Rob Zombie's Scariest Movie Yet 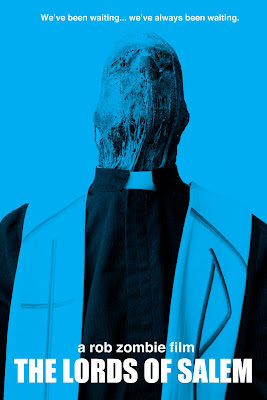 
Synopsis taken from IMDb
Heidi, a radio DJ, is sent a box containing a record-- a "gift from the Lords." The sounds withing the grooves trigger flashbacks of her own violent past. Is Heidi going mad, or are the Lords back to take revenge on Salem, Massachusetts?


Let me start off by saying how overdue we are for a good witch movie. Witches are creepy, if done right and I don't know if I'm the only one but they seem underused. Luckily Rob Zombie has changed that. Within the first five minutes of the film we see a handful of completely nude women including Sheri Moon Zombie. However, Sheri is the only attractive one of the lot. I never thought I'd praise someone on showing ugly women nude, but it really added to the authenticity of the witches.
Witches are ugly, horrid women and shouldn't be portrayed as beautiful people, something a lot of people get wrong.

While the movie is a bit predictable, it isn't entirely a giveaway. The story unfolds well and there are some bits along the way that you don't expect or foresee. Zombie doesn't rely on cheap pop scares with loud music and sudden movements. It's the subtle scares that haunt you and you remember. Although the movie takes place present day, yet again Zombie captured the feel of a good 70's horror film.

Sheri Moon doesn't play a ditsy blonde in this film like in "House of a 1000 Corpses" and "The Devil's Rejects". Instead, she plays a normal girl living a normal life and is harrowed by sudden terror. We also get hints that she's an ex drug user but is currently clean. It was refreshing to see her play a different role. I'm not saying she's a great actress, but she tried her beautiful little heart out and did a good job.

There's some scenes that are downright disturbing, such as a witch licking the blood off of a freshly newborn baby and then spitting in it's face several times. The church scene was pretty vulgar as well. I'll let you see what I mean for yourselves.

It's great to see a new vision of witches and it's even greater to see scary witches. I'd hate to jump the shark here, but it is my belief that horror is making a HUGE comeback. With the awesome Evil Dead remake being as critically praised as it was, let alone the box office earnings, and other future promising horror films such as "The Purge" I think it's safe to say we're on a streak here. Not to mention Fox's new smash show The Following, A&E's Bates Motel and NBC's Hannibal all keeping their audiences watching. And don't forget The Walking Dead. The Lords Of Salem is one to add to that streak for certain.


If you'd like to read another review in good favor of this film check out Hellbilly Hollywood's write-up.
http://hellbillyhollywood.blogspot.com/2013/05/god-hates-lords-of-salem.html