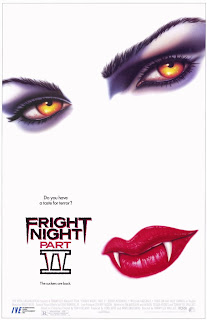 This is such a hard movie to find and get ahold of that I'm very pleased I was finally able to see it after all this time. The DVD goes for almost $70 on amazon, and seeing as I've never seen it there was no way I'm spending that kind of money on a movie that I don't know if I like or not.

As I've mentioned I've never seen this film up until now and I'm glad the opportunity finally arose. I have a few friends who have seen it and whenever I asked them how it was I just got the generic "it's okay, not as good as the first" reply. So I didn't have high hopes going in to this because they didn't exactly make it seem appealing.

This film takes place shortly after the first with Charley no longer believing in vampires due to seeing a shrink. He believes Jerry Dandridge was just a psycho and he imagined the vampire scenario. Peter Vincent however is still hosting Fright Night and believes in vampires. When Jerry's sister comes to town wanting revenge for her dead brother Charley starts to realize he's not crazy and that vampires are real. This leads him and Peter Vincent on another vampire hunt.

There were so many funny moments in this movie as well as jumps. It turned out to be a damn good sequel and did the first justice. The story was strong, the acting was good, the effects were cheesy but awesome. Alot of memorable moments came from this film including the vampire and werewolf bowling scene! Yes, I know it sounds ridiculous but it's a great scene.

Now the big question- is Fright Night Part 2 better than the first?
No it isn't. It's like Halloween H20 to the original 1978 Halloween. It was a good sequel and it kept the feel of the first and stayed true to it but it just didn't have the same amount of lightning in a bottle the first had. Good sequel though and I would proudly own it one day when I don't have to spend $70 on a used copy of it.

I found Jerry's sister, Regina Dandridge, very seductive and beautiful. Good job on the casting as well. But really to experience this movie you have to see it. It's funny and very entertaining. I'm glad to say that after all these years of wondering that Fright Night Part 2 did it's job with flying colors. It puts a smile on my face. And as I said in my review for the remake, I liked the remake alot so that means that all 3 films made in this franchise have my approval.

Seeing Charlie and and Peter Vincent together again was so cool! I didn't even know they were going to be in it! 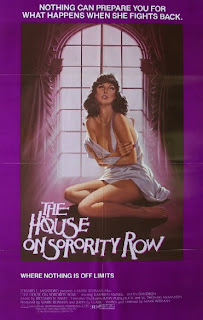 Posted by Drew Grimm Van Ess at 3:51 PM No comments: 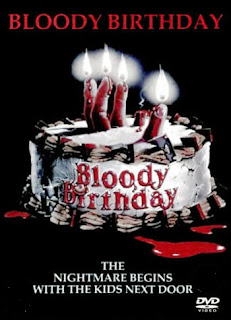 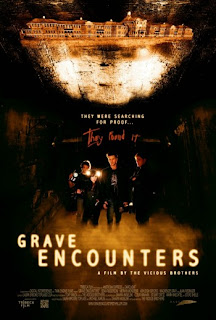 Posted by Drew Grimm Van Ess at 2:15 PM No comments: