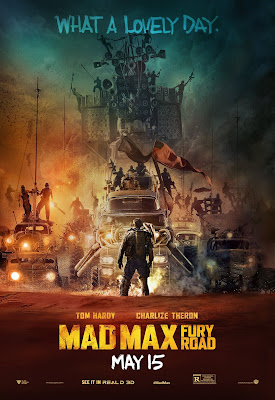 The story focuses on Furiosa and the repercussions of her running away in her War rig and taking Immortan Joe's five brides with her in pursuit of finding "the place of many mothers"; a place with green land and serenity where Furiosa grew up before being snatched away by Joe. As result of Max's O-Negative blood type, he's used as a human blood bag for a dying Warboy, Nux (Nicholas Hoult, X-Men: Days of Future Past), after being captured early in the film. Max is taken onto the road and thrown into the anarchic chase that ensues between Joe, his warboys, Furiosa and the women. After a lucky escape, Max finds himself befriending Furiosa and the brides. Even though they don't fully trust each other, they share a common enemy in Joe, and know that to make it out alive they must rely on each other. Midway through the film Nux has a change of heart and realizes that his manifest destiny isn't to die as a bad guy, but to help Max and Furiosa survive being barbarously hunted. As the movie closes it becomes a colossal race that is so action packed you can't look away from the screen. 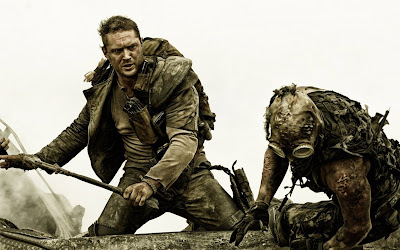 Someone involved with the making of Fury Road said that the movie starts with a chase and ends in a race, and that's right on the money. The intensity is relentless as there's constantly something going on on the screen to visually wow you. Rather it's fist fights, bombs, cars blowing up, or a good ol' chainsaw to the throat, the action never lets up. I've seen Fury Road around eight times now, and every time I see it I catch on to something new that I didn't see in prior viewings. That's due to the amazing level of detail put into the production. Also, the fact that the film is almost silent and is mostly spoken through movements, is a fine touch.

With hardly any computer generated FX, it's hard for me to find anything of real solidity to say bad about Fury Road. I know that the one complaint I've heard a few times is that there isn't enough story and it's all action. That's bogus. By the time the film ends, you know all you can possibly know about Furiosa, from where she lived, to her mother's name. You also discover a lot about Nux too, and Joe. And if you don't know Max's story because you never watched the originals, that's on you. This isn't Max's story. It's Furiosa's. Just because there's not a ten minute scene with people talking about their past doesn't mean that the story isn't there. Miller took a less direct approach to storytelling and it worked well. 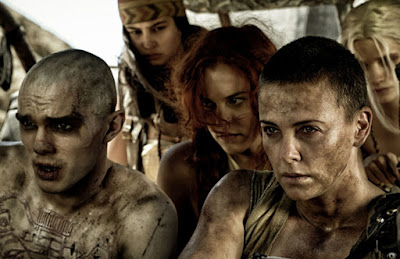 Fury Road is easily the most action filled feature with ingenuity that's hit the big screen in a long while. It's not Iron Man or Superman tearing down buildings, it's badass car chases that are visually stunning as well as grounded in realism. This is the action movie that adults, who are sick of contemporary comic flicks, have been waiting for. And it's a breath of fresh air from the typical things you see in everyday movies. If you find yourself at a moment when you are looking for a new movie to watch, and you haven't already seen Fury Road, then this is the one you need to pick. Sit back and prepare to be amazed.
Posted by Drew Grimm Van Ess at 2:03 PM