CARRIE is a bloody mess 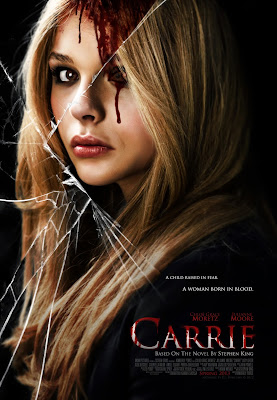 Synopsis taken from IMDb
A re-imagining of the classic horror tale about Carrie White, a shy girl outcast by her peers and sheltered by her deeply religious mother, who unleashes telekinetic terror on her small town after being pushed too far at her senior prom.

Almost everyone knows about "Carrie" and how the story plays out. If by chance you're not knowledgeable of the tale, I advise you to not read this review. I'm going to specifically mention things that may ruin it for anyone not familiar with the content.

For starters, Kimberly Peirce, the director of 1999's controversial film "Boys Don't Cry", and most recently, "Stop-Loss" (2008), took on the task of directing this re-imagining of the bloody tale. I find it only fitting that this movie is directed by a female, honestly. From where I'm coming from, I would think that logically, having a woman behind the camera could help put a new sense of realism and urgency to the situations at hand. That's what I thought, anyway...

The first thing that stood out to me was how everything is modernized. I expected it to be done, and I'm glad that it wasn't overdone. The girls locker room scene being uploaded on YouTube is a nice touch, and definitely sets the movie up right. However, aside from this flick being successfully placed in modern time, there's not much else it exceeds at. In fact, it comes up short in a lot of ways.

Such as, Carrie (Chloe Grace Moretz) and her relationship with her mother, Margaret White (Julianne Moore) is totally disappointing and flawed. I understand the need for a new take on the situation, but I'm not too happy with how this was done. From the go, Carrie is defiant and back talks her mom. The relationship between these two characters is the foundation of the entire story. So to have Carrie not be submissive and scared of Margaret doesn't work. I guess, to put it more simply, Carrie is too lively and not beaten down enough.

Not to mention, after Carrie realizes her abilities and overuses them to death, she uses them on her mom to basically throw her around and control her. Taking the control out of Margaret's hands and giving it to Carrie is a big mistake. The character of Carrie doesn't work as a strong and empowered person, it kind of takes away the point of the revenge at the end. And she uses her telekinetic abilities so much, that if you don't know what's coming at the end of the movie, you can tell it's going to involve her powers. The payoff is null and void because of how fabricated and fake everything is made to seem.

I dislike her semi-friendship with Sue Snell (Gabriella Wilde) as well. What should have been a key relationship in the story felt flat and hollow, with no heart and soul. Completely unconvincing acting.

Also, I really didn't like how the prom scene was executed. The setting looked good, and looked like a genuine school prom. I also like Carrie's relationship with Tommy Ross (Ansel Elgort), and the differences there. But, the way Carrie's revenge is done is just downright watered down and lame. First of all, I hated the movements she made when she was using her abilities against her schoolmates. I also dislike how she saved certain people from her reign of terror, such as Ms. Desjardin (Judy Greer).

I didn't feel the rage and hatred, and hurt. It wasn't authentic. Add to that, the worst thing of all about this flick is the fact that Carrie flies. I literally face-palmed myself in the theater! I found it utterly stupid. Doing something that has such a high cheese factor has to be done elegantly, and in a way to make it seem even less ridiculous.

Overall, I didn't like the cast. This motion picture has the cast of a PG-13 movie. Everyone is so Hollywood and fake, none seem like real characters that you can relate to. I like Chloe Grace Moretz as an actress, but I feel that her talents were wasted in a film that she wasn't suitable for. Even though she's made to look homely, it still doesn't work because she's too attractive.

All I can really say is that I'm disappointed like hell with this one. I had people telling me that it was going to "suck", but that's what everyone says when a remake is coming out. So, I went in with an open mind, expecting it to be good, hoping it to be good. And I came out extremely let down. Maybe, if this film were on it's own, and had no predecessor, I could like it. But, when you have an existing film done by the great Brian De Palma, I can't help but compare.

I understand why this movie went in the direction it did. It was the only logical step to take in putting a new take on the story. However, there's hardly any worthy advancements, and what is there is forged and expected.

I would say that this is a remake of the original film, not a re-imagining. The De Palma film is a re-imagining of the book by Stephen King. 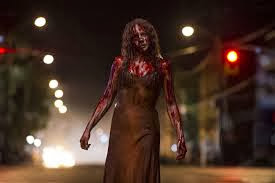 In the end, this is just another remake that doesn't live up to it's name.