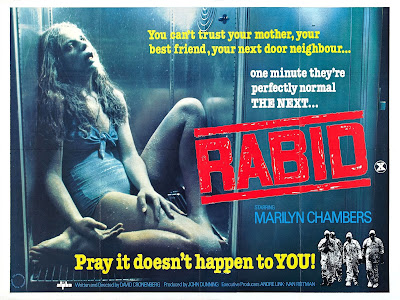 Canadian filmmaker David Cronenberg considers Rabid to be his “first epic”. And like most good movies, it almost didn’t get made. After Cronenberg’s first feature Shivers (1975), was considered too edgy, he struggled to get Rabid off of the ground for a few years due to the CDFC not investing. Then, he almost backed out of the project (originally titled Mosquito) when it was greenlit due to doubting the premise. However, cooler heads prevailed and Rabid, a film that’s said by many to be a foretelling of aids, was made in and on a budget of just $560,00.00. The movie needed a name attached to it that’s marketable, yet the production couldn’t afford a real actress. So, they hired popular 70’s porn star Marilyn Chambers over their original choice of Sissy Spacek. It worked out for the better in a sense, because you get to see Marilyn Chambers nude several times. And Cronenberg, himself, stated that he wouldn’t deprive his audience of not seeing Marilyn naked. You gotta appreciate a good director who cares about his audience, don’t ya?


Rabid starts off with Rose (Marilyn Chambers) and her boyfriend Hart (Frank Moore), on a motorcycle cruise when they get into a serious accident. The result; Hart gets thrown from the motorbike, while Rose gets trapped under it as it explodes. With Rose’s intestines destroyed, a nearby plastic surgery resort; the Keloid Clinic, takes her in to perform emergency surgery. Dr. Dan Keloid (Howard Ryshpan) seizes the opportunity to use a “radical” method of treatment that is similar to stem cell research. He takes a piece of flesh from Rose’s thigh and sends it off to a lab where it can be processed to be “genetically neutral”. The outcome is to have the tissue adapt to whatever part of the body it’s being grafted to and look natural. After she wakes up sooner than expected, she attacks a patient named Lloyd (Roger Periard) with a fierce looking stinger that comes out of a butthole in her armpit and drinks blood. As it turns out, Rose can no longer digest food properly due to the damage her intestines endured. And as a result of the surgery, her body has adapted with a short digestion track, so she can only feed on basic protein.  Like a vampire bat. Cronenberg described it best during the commentary when he said that it’s, “instant evolution in one person instead of a species.”  Lloyd turns rabid in the backseat of a taxi and bites the driver causing a crash that almost killed Cronenberg filming it. From this point in the film Rose leaves a trail of bodies behind her including a perv in a barn, a perv in a movie theater, Dr. Keloid and her good friend who she stays with. The version of Rabies spreads like a zombie plague and Martial law is declared. Hart finally finds Rose, and after telling her that she’s the carrier of the disease that’s causing the chaos on the streets, she freaks out and flees to feed on another victim. Hart receives a phone call from Rose who tells him that she’s fed on a man, and is sitting in the room with his body to see if he comes back infected. Due to the fact that Rose’s idea is as dumb as it sounds, she is killed by the man. The movie concludes as we see Rose’s dead body getting thrown in the back of a containment truck. 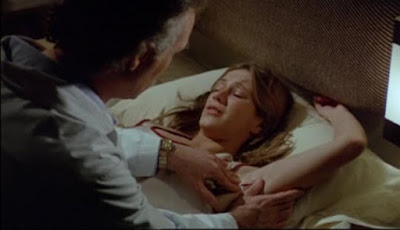 The scene with the woman biting the man’s ear on the subway was directly inspired by Cronenberg, who admitted on the commentary that he wanted to bite a man’s ear on the subway once. But what I find even stranger than that little tidbit, is that no one really brings this title up when discussing vampire movies. Sure, it might not be your typical tale of blood drinking, but Rose is a vampire nonetheless. Some would even call this a zombie film. What I find appealing about Rabid is that it came before its time, and it’s still relevant. With all of the diseases and viruses, going around nowadays who doesn’t fear an epidemic like this happening? It’s frightening to even think about.

The movie as a whole is very good.  Especially for a second effort from a director who didn’t even go to film school! There’s very little that I dislike about Rabid outside of Marilyn Chambers not being able to keep her eyes from moving constantly when they’re closed and she’s supposed to be in a coma. Her inexperience shows in her acting. Luckily, she’s surrounded by her betters, so the movie doesn’t sink based on her inability. Frank Moore really shines, and acts his ass off at the end when he hears Rose being attacked through the phone. That is easily the most memorable scene in the film in terms of performance. 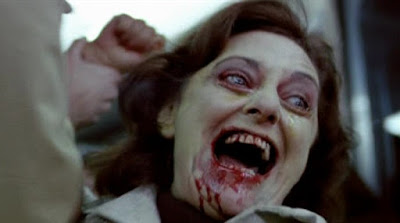 Like all of Cronenberg’s other work, Rabid is intelligent, sexy and entertaining. I’ve never been scared by a Cronenberg flick before, but that doesn’t stop me from enjoying them. Though Rabid is most certainly not Cronenberg’s greatest achievement (that would be Videodrome (1983)) it has held up over time and continues to find a new audience. Most importantly, by watching his earlier projects you can see the intellectual and innovative filmmaker Cronenberg was to become later in his career.
Posted by Drew Grimm Van Ess at 7:26 PM