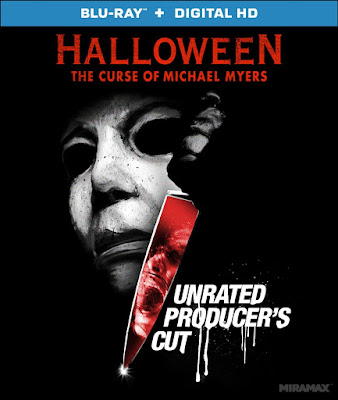 Let me start off by saying that I’ve never cared for the theatrical version of The Curse of Michael Myers.  My big complaint is that like The Return of Michael Myers and The Revenge of Michael Myers, Michael is an oaf. It would appear that while Season of the Witch was being made, Michael hit the gym hard on his time off and grew a few inches. Michael went from a normal sized guy to a pro wrestler, and the reason for this is because of Moustapha Akkad wanted to compete with Jason Voorhees. Where went wrong was ever trying to compare the Halloween series to an imitation. I also am not privy to the ugly mask nor its size. And I despise the ridiculous Thorn crap among other things. So, going into this Unrated Producer’s Cut (originally known as Halloween 666), I definitely wasn’t excited, but I was thinking it had to be better…


Tommy Doyle (Paul Rudd in a non performance), a survivor from the first Halloween back in 1978, is obsessed with Michael Myers. He lives across the street from the Myers house where by some random stroke of coincidence some Strodes move in. After escaping from the Thorn tribe, Jamie Lloyd (J.C. Brandy) leaves her newborn baby, Michael’s next victim, in a bus station for safe hiding. And she calls the local radio station to warn everyone that Michael is back. She then gets driven off the road and stabbed by Michael, and lives. Unlike in the theatrical, Jamie doesn’t die by getting impaled on a corn thresher. Instead, she lies in a coma for half the film before being shot in the head. Kara Strode (Marianne Hagan) and her son Danny (Devin Gardner) live with Kara’s younger brother Tim (Keith Bogart) and their parents, Debra (Kim Darby) and John (Bradford English) in the Myers home. Danny keeps hearing the “Man in Black” in his head influencing him to murder. After hearing Jamie’s desperate plea on the radio, Tommy finds Jamie’s baby (who is silent until the very moment Tommy arrives and then starts to cry) at the bus station. He takes the child to Dr. Loomis (Donald Pleasence), where they form a sort of team along with Kara. Long story short, the Thorn tribe wants Michael to kill the last of his bloodline, he and Jamie’s child (yes, Michael is now incestuous), so he can be lifted of the Thorn curse and pass it on to someone else i.e. Danny. Michael switches clothing with the “Man in Black” a.k.a., Dr. Wynn (Mitch Ryan), and gets away. Dr. Wynn, wearing Michael’s mask and coverall, grabs Loomis’ wrist and passes on to him the mark of the Thorn, making Loomis the new cult leader.

There are more scenes with Loomis, and more character engagement between he and Dr. Wynn. We see how good of friends they really are, and that’s a plus. Aside from that, I enjoyed the new scenes of Danny being influenced and hearing “the voice” from the “Man in Black”. Other than that, absolutely nothing in the film has been changed for the better.

The movie starts with a hiccup that I immediately noticed and laughed at: Loomis (Donald Pleasence) is narrating while Jamie’s baby is being handled by the cult. He sums up the past four films, and he ends by saying “many believed he [Michael] was dead.” That makes no sense. Who the hell thought Michael Myers was dead? He went to jail and got broken out. Everyone supposedly believes that the explosion that freed Michael from jail actually killed him and Jamie. I was immediately annoyed. At about the 80 minute mark is where you really see this film take a left turn. It delves deep into the Thorn tribe and tries to offer more of an explanation to the plot holes in the theatrical, but the explanation is just plain stupid. And, the plot is just as confusing. Though Michael is a non-stop supernatural killing machine, he’s reduced to a parody of himself in this alternative take. He’s easily stopped by putting a few pagan Runes (that look like frozen meatballs) in a circle. This is the juvenile explanation Tommy Doyle gives to Loomis as to how the Runes stop Michael: “I think Michael is under the influence of an evil rune [Thorn]. There are Runes of light, protection. If Thorn could somehow be trapped by these Runes, the energies could cancel themselves out, the evil could be destroyed.” Even worse, the most eye-roll invoking line is spoken when Tommy explains to Kara why Michael wants her son. He states: “in his [Michael’s] mind, anyone living in his house is his family.” It just furthers evidence of how half-assed it was written and thrown together. Going by that logic, if I moved into Michael’s house I’d be considered family? Really, that’s the best they could come up with?

In the end, the biggest flaw of all is giving Michael Myers an unworthy backstory. That’s what cripples it. Same as Rob Zombie’s 2007 white trash depraved abomination that he calls a remake. The acting can be poor and the dialogue can be weak, but those things are forgivable in this type of flick. What is unforgivable is coming up with an origin story that discredits the character you watch the films to see. I honestly got no enjoyment out of watching it except for the sake of laughing at how poor of a film it is. This is not one that I’ll be watching again for a long, long time. I have no need to waste the time on it. I can see myself popping this in at odd hours in the early morning for background noise while intoxicated with friends for something to chuckle at. That’s the only probable scenario in which I’ll be watching this again more than likely. I guess it’s true what they say: you can’t shine a piece of crap.
Posted by Drew Grimm Van Ess at 12:37 PM