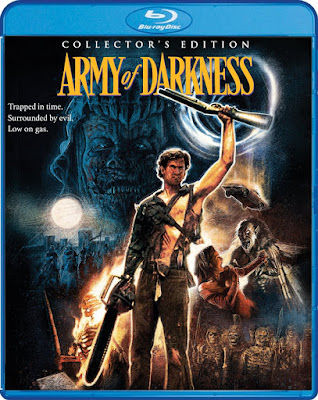 In 1992, Director Sam Raimi ended his Evil Dead Trilogy with the practical effects extravaganza known as Army Of Darkness (Originally titled Bruce Campbell Vs. Army Of Darkness). This time instead of releasing the film independently, like the first two, Army Of Darkness was distributed through Universal Studios, making it the only studio film out of the three. Using like humor of Monty Python and The Three Stooges, the concept for Army Of Darkness was supposed to be the sequel to 1981’s The Evil Dead, but the recourses weren’t there at the time. So, what was then-called Medieval Dead was put on hold and Evil Dead 2: Dead By Dawn (1987) was made as a middle film. Army was made for a PG-13 rating, hence why there’s not nearly as much gore as the prior two flicks. However, as ridiculous as it is, the MPAA gave the film an NC-17 rating! So after editing nothing, the film was resubmitted and garnered an R rating. People involved in the making of Army wonder if the film would have been gorier had Raimi known the MPAA was going to screw the film in the end anyway. Some even assume that the MPAA deliberately put the boots to Raimi because of him bypassing them and releasing the first two films unrated. Either way, it doesn’t matter because since the studio didn’t want the film’s title to have Evil Dead in it, fans didn’t identify it as a sequel in the series. In effect, it failed miserably at the box-office and was pulled from theaters quicker than you could say “boomstick”. However, the film has since become an immediately recognizable cult classic thanks to word of mouth and home video releases…


By my calculation, Army Of Darkness has been released and re-released on DVD a whopping eight times! And the Director’s Cut was only released on two of them. One being the standard Director’s Cut DVD, and the other would be on the Boomstick Edition in which you get both Theatrical and Director’s Cut. Now that we’re in the Blu-ray era, Army Of Darkness is already on its second release with the new fully-loaded Collector’s Edition three disc set by Scream Factory. Universal Studios had the first go with the film on Blu-ray with the Screwhead Edition flaunting the original cover art, which had a fair amount of supplemental material on top of the clear picture quality. So, the question begging to be asked is this: is the new Scream Factory re-release of this cult classic really a necessary purchase?

Synopsis taken from back cover: Back to do battle with the hideous “Deadites,” Bruce Campbell returns to the role of Ash, the handsome, shotgun-toting, chainsaw-armed department store clerk from S-Mart’s housewares division. Demonic forces time warp him- and his ’73 Oldsmobile- into the Dark Ages, where he romances a beauty (Embeth Davidtz, The Amazing Spider-Man) and faces legions of the undead. Can Ash save the living from the evil dead, rescue his girlfriend, and get back to his own time?

By far the best part about the new Collector’s Edition is the fact that you get all four cuts of Army Of Darkness; Theatrical Cut, Director’s Cut (first time on Blu-ray), International Cut (4K transfer from inter-positive) and the TV Cut. No other release has done this before, so it’s pretty exciting to have so many ways to view the film now. Up until I owned the new Blu-ray, I have only seen the Theatrical and Director’s Cut. I’ve always preferred the Theatrical to the Director’s Cut, simply because I’m not a fan of the ending of the Director’s Cut. Though now after viewing both the International Cut and the TV Cut, I’m more inclined to lean towards the International Cut as my new favorite version of the movie. To me, it has everything good about the Theatrical and Director’s Cuts combined to make a perfect cohesive picture. There’s more Ash and Sheila, Evil Ash and Shelia and Ash vs. Evil Ash! Even though every version except the Director’s Cut share the same ending, they’re all worth a watch for their differences. And after watching all of them, you’ll realize something that you may never have really realized before; how hard Bruce Campbell worked. All the different takes of the film show you all the different things Bruce had to do for a lot of scenes that most people haven’t even seen before! Ash may be a goofy character, but the man behind him is a true underrated talent. The Director’s Cut runs the longest at 96 minutes, with the shortest version being the Theatrical at 81 minutes. The International Cut runs 88 minutes long, while the TV Cut runs two minutes longer at 90 minutes.


A lot of the bonus material can be found on a few other releases, like the “Men Behind The Army” featurette, trailers and deleted scenes. But what Scream Factory did was put them all in one place, on one set of discs. Eliminating any reason to hold onto any other version you might own. Then, there’s a new feature-length documentary called “Medieval Times: The Making of Army Of Darkness”, which is very amusing and informative. I particularly enjoyed learning about how much Sam Raimi toyed with Bruce Campbell on the set, and how he bragged that he could get Bruce to do whatever he wanted. I also liked hearing the struggles they had making the movie, like the long tedious hours they kept. Ultimately, if you don’t know a lot about the making of Army of Darkness, you will after watching the new featurette. Other goodies include a “Creating The Deadites” featurette, Behind-The-Scenes Footage from KNB Effects, Inc., Still Galleries and more. The cover art is simply beautiful. It’s elegant, yet heavily incorporates key scenes from the film to really give it that essential collection feel. The jewel case under the slipcover gives you the option of reversing the cover and flaunting the original poster art, if you prefer the original artwork to the new art. All of the discs all have different movie artwork on them and each disc has a different menu. Not to mention you literally get every bonus feature ever available on top of the new stuff. Any critique I could have would be sheer nitpicking. The picture and sound quality is on par with what you’d expect from Scream Factory, all except the TV Cut which is presented in its original standard definition format. This is by far the best way to own Army of Darkness. Scream Factory made sure they lived up to their reputation with this one by making a true definitive release for the fans. I personally, couldn’t be more satisfied. Owning this Collector’s Edition makes any future Blu-ray releases of Army of Darkness null and void, which I’m pretty sure was Scream Factory’s idea. Don’t miss out on this glorious Blu-ray set that hits store shelves next Tuesday, October 27th. If you order it directly from Scream Factory’s site HERE, you get it first, like me. You also get a sweet limited edition poster of the commissioned cover art free while supplies last!
Posted by Drew Grimm Van Ess at 3:35 PM