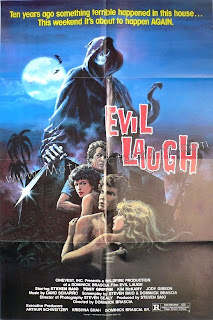 Here was yet another horror film I was really looking forward to seeing. It has a very underground following and not too many people know of it or seen it, but I wanted to check it out for myself.

I was instantly regretting wasting a rental on this when I saw the opening credits. It was so low budget and the acting was so bad it looked like a student film. However, after riding it out I started to actually enjoy it. Yeah, it was goofy and yeah the acting was bad, but then again so many 80's horror films that I love and even consider favorites have these same traits.

Synopsis taken from IMDb
An old orphanage has just been rebuilt after it was mysteriously burned to the ground over a decade ago following accusations of child molestation and abuse by Martin, whose own father committed suicide out of shame. Needless to say he couldn't prove his innocence, suffered a psychotic breakdown which subsequently led to him systematically slaughter the other occupants, including the kids, particularly the accusers, before perishing in the blaze that followed. Now a group of med-students are brought in by a seemingly benevolent doctor turned pediatrician, Jerry who seeks to fix the place up as less an institution more of a foster home. One of the students is set on dwelling there at this current position, while the others are set on helping them settling in. But soon they'll discover that our current owner has been secretly disposed of by an intruder, who is still lurking close by...

Over all I found the movie enjoyable and fun, far from great, but I would give this a second watch. It's not that bad if you give it a fair chance and if you love horror like me. Don't expect anything great when watching and you should have a good time.

Until next time gang, have a Grimm time.