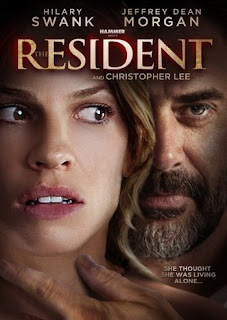 Now to be honest, I wasn't expecting much of this film just due to the fact that I've been on a bad run of movies lately. Other than going through seasons of Scrubs I'm overall underwhelmed with everything else I've been seeing.

But I guess I pulled a rabbit out of a hat because The Resident rocked. Swank and Morgan were awesome. This kind of movie doesn't come around that often due to how overdone it used to be. But this is one stalker thriller I'd gladly rewatch. It isn't a long movie which surprised me, shorter than I'd imagined it would be. But the first half of the movie slowly builds and builds and then the last half is a rush. Good movie. And Christopher Lee's cameo was awesome.

When Juliet Devereau (Swank) splits with her boyfriend she decides to move into a new apartment for a new beginning. She starts to develope a thing for the owner of the building, Max (Morgan) and he seems to take a liking to her also. But all goes downhill when Juliet starts getting involved with her ex again, causing her relationship with Max to cease. Max however, we find out, is obsessed with Juliet and has been sneaking into her apartment to drug her and violate her.

Once Juliet starts to feel something is off she sets up cameras all over her place awaiting to see the footage she'll find of what goes down in her apartment while she's away. And while she's sleeping.

3 stars for me. View the trailer.