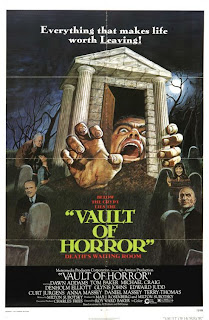 Being a huge fan of Tales From The Crypt and owning all seven seasons and Demon Knight, Bordello Of Blood and Ritual, I had to see Vault Of Horror. Vault Of Horror is the same concept as the show, even based after the comics by William M. Gaines.

My finest memories of my childhood are staying up late with my mom watching HBO, back when it was channel 14, and watching Tales From The Crypt together. I even had a Crypt Keeper doll while all the other neighborhood kids had their Power Rangers. Not that I didn't have my fair share of them also (laugh). So naturally my love for this show stayed with me over all these years.

Vault Of Horror litterally starts off with five guys entering an elevator and it takes them to the basement instead of the 1st floor, which is where they were heading. When they arrive in the basement there's a table with beverages in the center of the nicely decorated room. They all figure they'll just relax down there until the elevator problem gets fixed. And as they're all sitting around the table they get to talking about all of the terrible dreams they have.

So they take turns going in rotation of telling what their terrible dreams are. Our first guy's dream titled "Midnight Mess", is about how he hired a spy to track down his sister. After getting the location of her and killing the spy he goes to a restaurant where they have stopped serving food. So he leaves and goes to find his sister and kill her. After he does he returns to the same restaurant, finding that them not serving him earlier wasn't exceptable. Upon arriving he finds a whole new crew working the restaurant and it's quite packed.

After ordering a few things and finding them nasty he soon discovers it's a vampire crew working and serving vampire customers. With him being the only human there he gets eaten. And the last vampire to have a taste is none other than his dearly departed sister who he murdered prior to going back to the restaurant.

Our 2nd guys dream titled "The Neat Job", is basically about how he is a neat freak and always harasses his wife for being sloppy and not keeping his place up the way he likes. The stress becomes so unbearable that his wife eventually breaks down and kills him because she can't take it anymore. And she puts all his severed limbs in jars and placed neatly on shelves in the basement. Only then did she see peace.

Our 3rd guys dream is titled "This Trick'll Kill You", and it's about this magician who sees a magic trick performed by an Indian girl. The trick is that when playing her flute she makes a rope stand up and get out of the vase it's in and when the rope is totally upright she climbs it, without being supported by anything. He becomes obsessed with this trick and tries to buy it off of her but to no avail. So he tricks her into thinking his wife is sick and tells her his wife would love to see the trick, tricking her into his hotel room. He then kills her and takes the vase and flute and tries to perform the trick, only the rope knows what's happened and kills him and his wife faking to be sick.

Our 4th guys dream titled "Bargain In Death", is about him faking his own death for an insurance scam. And everything goes wrong, including his death being faked...

And last but not least our 5th and final story is titled "Drawn and Quartered", which is about our guy and how he is a good painter. Even though he's not making any money, due to being told by his agent that he isn't good enough. He finds out that it's a scam and his paintings have been selling great and everyone knew but him. So he goes to a vodoo doctor and gets some mojo to take down his foes. By drawing them and destroying them he kills them the way he destroys the painting.

But like all these stories, none have happy endings as our guy realizes he left his watch at his last victims house. He rushes to get there and get it back to avoid suspicion from cops and on his way there his painting of himself gets destroyed and our guy gets ran over by a truck.

Overall I liked the movie, enjoyable. Although I still prefer Tales From The Crypt anyday over this. But if you like one I guess you'll like the other.

3 stars for me, view the trailer below.
Posted by Drew Grimm Van Ess at 11:25 AM

Email ThisBlogThis!Share to TwitterShare to FacebookShare to Pinterest
Labels: Tales From The Crypt, William M. Gaines