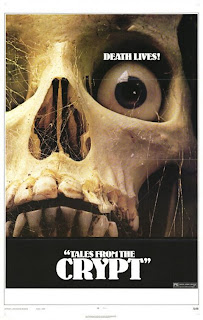 This was the one and only thing left of Tales From The Crypt I haven't seen so I had to change that. And I must say that I was impressed. It was a very fun film, especially to those who love the show, it was like the show but without the humor. I liked this alot more than Vault Of Horror, they are the same concept though.

Five people go into a crypt and are locked in and greeted by a shady character in a brown robe (Crypt Keeper) and when they all want to leave the crypt he simply asks them why they want to leave. Then he shows them a glimpse of what lies ahead for them when they leave.

The first story, which is my favorite of the five and actually my favorite episode of the show, is titled "...And All Through The House". Which is about a woman who kills her husband to cash in on his insurance on Christmas Eve night. After doing so, she hears a radio announcement that a person dressed as Santa has escaped the mental hospital. And of course he ends up at her house.

Our second story is titled "Reflection Of Death" which is about a guy who abandons his family to take of with his mistress and they get into a car crash. After the crash he wakes up and goes to visit his wife, only when she sees him she screams in horror. And her last name isn't the same anymore...hmmmm. Then he goes to visit his mistress and she's blind from the accident but keeps saying "it can't be you, it can't be you". I'll leave you to decide what's going on...

The third story is titled "Poetic Justice" which is about an old retired garbage man who keeps being hassled by his neighbors. They have his dogs taken, call him a pedophile and send him Valentine's Day cards from all the towns residents filled with poems on how they all hate him. This causes him to kill himself and puts a big old smile on his neighbors faces. Until he returns from the grave...

Our fourth story is titled "Wish You Were Here" which is about a coulpe about to lose everything so they resort to wishing on a statue that grants them three wishes to get them out of debt. Only the wishes go very wrong. It's very, very similar to the story "The Monkey's Paw".

And our fifth story is titled "Blind Alleys" about a guy who takes over as head of the home for the blind and treats the blind like crap. Feeds them slop while he eats steaks and drinks wine, doesn't get them blankets while he gets fancy paintings for his office, etc. Finally the blind band together and plan a revenge scheme.

I really liked this film, and you can get this and Vault Of Horror in a double pack for very cheap. I recomend it to any of you Crypt fans such as myself.

Email ThisBlogThis!Share to TwitterShare to FacebookShare to Pinterest
Labels: Tales From The Crypt, William M. Gaines