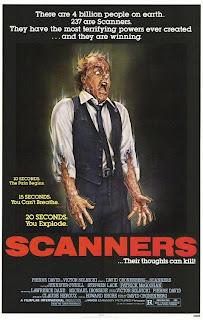 
Synopisis taken from IMDb
Darrly Revok is the most powerful of all the scanners, and is the head of the underground scanner movement for world domination. Scanners have great psychic power, strong enough to control minds; they can inflict enormous pain/damage on their victims. Doctor Paul Ruth finds a scanner that Revok hasn't, and converts him to their cause- to destroy the underground movement.


I'm a HUGE David Cronenberg fan, The Fly is one of my all-time favorite sci fi films ever. This guy is a legend of the cinema, so I'm always stoked to check out a new film by him. Especially a movie by him that has a notorious head exploding scene. But it's safe to say my expectations were pretty high...

The movie started off with a good flow, the acting seemed strong, convincing story and well directed. It keeps you enthralled, looking and waiting for the next crazy corner this film was obviously taking.

I thought this film had solid characters and character developement. The effects were well done and the movie delivered. However, it wasn't Cronenberg's best in my eyes. I expected more but I wasn't really let down by this film, I still very much enjoyed it.

One of my main flaws with the film is that i thought it dragged on a little, but the fact that it was creative as hell kept me watching. I didn't know what I was getting into, just that I was in for a Cronenberg head trip.

The ending of this film was good and had a twist that I can't say I didn't see coming but it didn't effect the film in a negative way. I do feel that there should have (could have) been more story to it than there was. I guess that's what Scanners 2 and 3 are but I can't say I'm looking forward to jumping into them. The fact that I didn't even know they did sequels signals the alarm in my mind.

Cronenberg did what he does best and that's deliver a movie that is a totally crazy idea but makes it work wonders on screen. While it wasn't his strongest film it didn't hurt anything for his career and it won't hurt other people to watch if they enjoy good films.