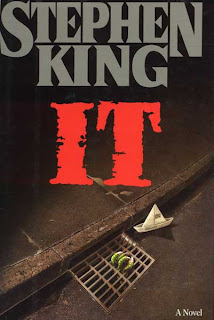 In 1986 the undisputed master of horror Stephen King released his masterpiece, IT. At this point in King's career he had already published Carrie, Salem's Lot, The Shining and The Stand as well as some other greats. IT sold a million first-run copies, his most to date, and won the British Fantasy Award in 1987. IT was also the best-selling book in the United States in 1986 and was nominated for several other awards. There's even been a 25th anniversary special edition version released that's very pricey.
http://www.amazon.com/25th-Anniversary-Special-Stephen-King/dp/1587672707/ref=sr_1_1?s=books&ie=UTF8&qid=1341003689&sr=1-1&keywords=stephen+king+it+25th+anniversary

Now you're probably asking "why is he reviewing a book that's over 20 years old?", and the answer is simple. I just got around to reading it a few months ago. And during the process of reading the book I watched the movie twice and noted the similarities and differences between the book and the movie. That's why I decided to do a review/comparison.


So the inevitable question: Was the book or movie better?

Even though I grew up with the movie and love it I'd have to go with the book. The book had more detail and more character development. I felt that I personally knew the kids in the book. Bill with his stutter, Eddie with his asthma, Richie with his jokes, Stan with his birds, Mike with his history obsession and Bev with her family issues. Real characters. Real problems.


And just to think that they had to fight an evil entity plaguing their town who disguised itself as a clown named Pennywise. And all they had to rely on was their friendship and courage. Very powerful story-telling done with beautiful and descriptive detail.

After finishing the book I was torn because I had the awesome feeling that comes with finishing a good book and the disappointment that it was over and I didn't have anymore pages to continue the journey I lost myself in day after day. Even having to put it down at times due to being creeped out. Not a book to read at night.

Now for those of you who don't know what this books about let me explain it to you. The town of Derry is plagued by an evil entity that disguises itself as a clown to lore little children and eat them. The cycle repeats itself every 27 years and children turn up dead and missing. One day IT claims a little boy named George, and George's older brother (stuttering) Bill gathers his childhood friends in an attempt to kill IT. And after what they thought was a successful cease and destroy mission they discover IT's back 30 years after they faced it as children. Making Bill and his friends come together again one last time.

I really have nothing but praises for this book although I did find it dragged out a bit in some parts, mostly the Derry interludes, but it didn't drag on enough to hurt the book. The book stands strong. It's an adventurous, scary, funny, sad, endearing, empowering and most of all at it's core IT is a story of friendship and the bond it carries.

I give the book 4 stars. 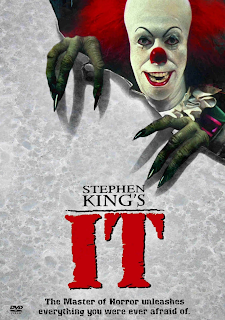 
Synopsis taken from IMDb
In 1960, seven outcast kids known as "The Loser Club" fight an evil demon who poses as a child-killing clown. 30 years later, they are called back to fight the same clown again.


This movie is awesome! Such a classic! Everyone is afraid of Tim Curry's Pennywise, I used to watch this film as a kid and I always remembered the George scene with the paper boat. Heavy stuff for a kid to see and still creepy for and adult me now.


I always thought this movie had good acting in IT was good and very believable. And had a very good cast. 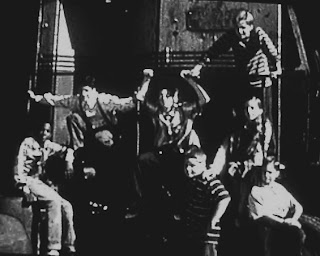 Even though this was a 4-part TV movie they ran with it. There isn't alot of gore but they scare you in a classy traditional way. Pennywise is enough to scare us without gore.


Like the book the movie is scary, funny, sad, endearing, empowering and adventurous. 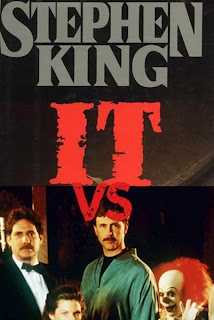 Now as I mentioned earlier, the book is clearly better. But I'm not degrading the film at all for that. It happens most of the time when a book succeeds the movie

The movie had the advantage of not getting boring and slow in areas where the book did. The movie was more steady and consistent.

The book had the advantage of not having a time restraint like the movie and because it was a book it allowed for so much more detail. IT is probably the most detailed book I've ever read and the movie did a good job interpreting it and as good as the movie was it was a watered down version of the book.

The book was scarier even though the movie did a great job with the scares. The parts that scared me the most were where Bev was hearing voices in the bathroom sink drain. This occurred several times in the book and in the movie there was only 1 scene.

After reading the book I realized how different Pennywise was in the book. A huge chunk of the book he only appears as the clown here and there, he mostly gets kids as Frankenstein or The Teenage Werewolf or The Creature From The Black Lagoon and other odd things. The movie made it seem like IT was always a clown. He was the clown way less in the book.

Pennywise was more terrifying in the book but Tim Curry did a great job as the character.

There's a scene in the book where Bev lets the crew of boys from The Loser Club to make love to her to bring them all close as a group when she feels they may fall apart. I don't know how they could have done this in the movie since she was a young teenager in the book when she did this act. So although the scene made a good part in the book I don't think viewing that scene in a movie would be necessary.

And by far the scariest part in the film for me was when Bev goes to visit her father as an adult and ends up drinking tea with the old lady who eventually becomes her dead, decomposed father and chases her around the house. In the book the old woman became a witch and the house Bev was in was made of sweets and she realized that she was caught in Hansel and Gretel's story. I thought this scene would have been way better if they followed the book. It's one of those things where you don't know why they didn't make it that way.

There were characters that I didn't think the movie portrayed properly. Mostly Ben Hanscom (John Ritter) and Richie Tozier (Harry Anderson). They're appearances in the movie didn't match up.

Movie's a classic and a close 2nd but the book's simply a masterpiece.


I recently read some news online talking of a remake and as of now it looks as if there will be a remake of IT and Pet Semetary. IT is said to be more like the book but still having the trouble of a time frame, you can only do so much in a cramped time period. And Pennywise is said to be more like in the book and not as comically funny as Curry's portrayal but more savage and scary with dark humor. And I also heard that it would be taking place in modern time and not following the book's timeline. I guess we'll see...

I'd like to see the remake portray the characters as good (with the exception of Ben and Richie) and I'd like to see Pennywise be more scary and horrific. I also'd like them to elaborate on some of the details better, like how in the book George's scrapbook went all crazy twice and only once in the original film. I remain optimistic about the film but only time will tell if I'm right right or wrong in doing so.

Email ThisBlogThis!Share to TwitterShare to FacebookShare to Pinterest
Labels: Clown, IT, Stephen King