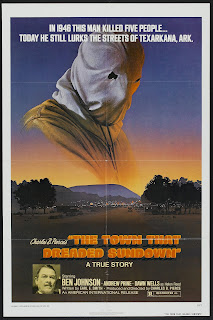 Synopsis taken from IMDb
Set in the late 40's the residents of Texarkana, Texas are left terrorized by a mysterious hooded killer who is stalking victims during the evening and leaving the local police at a loss.

This film isn't available on DVD or Blu-ray and I don't have a VHS player, but that doesn't stop a guy like me.

This film was based on true events.

My first impression going into this movie was that it was going to be a good movie because it's deemed a classic by alot of horrorhound's. And after watching I can't say that I disagree, however there was one scene in particular that almost ruined the movie for me. The hooded killer attacks a victim with a trombone and I thought that it was absolutely ridiculous. I know the film had some humor going in but this scene just did not fit in with the rest of the movie at all. My opinion of this movie would be higher if this scene weren't in it. Take a look.

Now before and after that particular scene I liked the movie and was entertained. It's crazy to see how far the slasher genre's gone. I wasn't scared of this movie, but it kept me watching. I also didn't like that the killer used a gun, it just didn't come off as appropriate to me. But it is based on true events so if the killer used a gun it makes sense and I can't bash it for that.

I can see how some people would defend this movie's faults (like the trombone scene) but it wasn't a bad movie. The acting was decent, the story was clever and some of the kills were pretty cool.

The ending was good, could have been better but I liked it. I wish I was alive during it's release because I'm sure the effect would have hit me harder. It's just a movie that has gotten outdated. But that's okay! Alot of our favorite horror films could be laughed at by today's audiences.

There's not alot of gore at all, but that doesn't hurt a movie, and alot of gore wouldn't fit with this movie.

Walking away from the movie I was a bit disappointed but overall I liked it. I think it would have been better if it took itself more seriously.