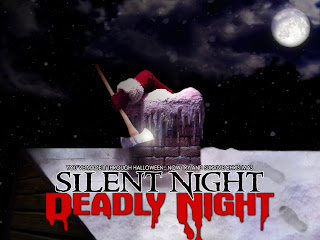 Synopisis taken from IMDb
A young boy watches his parents by a thief in a Santa suit. He spends his youth in an orphanage, staying quietly to his self, but his mind is further bent by an ironhanded Mother Superior. He finally gets a job at a local store, where he finally snaps when he is required to wear a Santa suit, and goes on a killing spree that leads him slowly back to the orphanage.


This film is one that I've heard about for awhile but it just kept seeming to get overlooked by other films I've been meaning to tackle. So when the time came to give this movie a go I was anxious to experience this film because of all the hype I've built up for it in my mind.


From the second the film started I knew I was going to like this one. The story was pretty good, simple, but nothing short of what you'd expect from an early 80's horror film. The acting seemed good and the theme and feel for the film fit very well. The music was very fitting.


I liked the buildup to this film, I didn't get bored watching the story unwind before the killings started, I was actually glued to my seat. We see the lead character, Billy, go from being a child to being an older child in an orphanage to being an adult and working a job. We see the trauma he's encountered and can totally understand his breakdown that we knew would happen.


The killings in this movie were awesome and well done. They were fun and brutal but not overly done or ridiculous. They were the type you'd look away from but would still be entertained and want to watch/see more. And more importantly I liked the backstory to Billy this film and thought it helped alot in the buildup to his breakdown and killing spree. My favorite death by far was when Billy impales a victim on the antlers of a antelope head on the wall.

I give this movie a high 3 stars.