DEAD IN TOMBSTONE is the western from hell 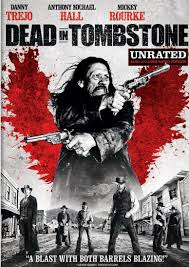 Synopsis taken from IMDb
A gang overruns a small mining town murdering their own leader Guerrero (Trejo) in a cold-blooded power grab. Sentenced to eternity in hell he finds himself confronted by Satan himself (Rourke), offering a daring proposition: deliver the six souls of his former gang and he will escape damnation. With time running out, he sets out on a brutal rampage to avenge his own death.

Starting with high paced action and explosives, and the settings, it's easy to see that this low budget production was done right. Made on just over $5 million, it comes off more like a theatrical release, which impresses me. To me, this motion picture comes off like "The Crow" meets "Tombstone".

It's a revenge story, but done in a very graphic western portrayal. I don't usually tend to like westerns, but there's good types of flicks from every genre. Those horror buffs who say they "only watch horror" are people I find to be both liars and boring. If you're a cinema buff, you watch it all.

The action is over-the-top, but fitting, and the experience of watching from beginning to end, is nothing short of thrilling. It held my attention and never got dry or disenchanting. I find the story to be somewhat generic, and nothing creative. But, those watching this should know exactly what they're getting in for: a lot of bloody violence, one-liner jokes, and a fun experience. 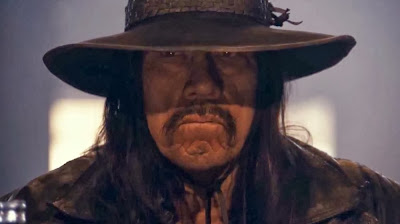 What's disappointing to me, is that Mickey Rourke seemed to have left his acting ability somewhere else, because it isn't visible on screen. He just walks about and talks trash, antagonizing Danny Trejo, who also wasn't up to par with his performance. There's several times where it seems Trejo was just reading lines off of paper, and it makes his acting suffer.

However, most surprisingly, Anthony Michael Hall is great in this! I haven't seen something by him that I've liked since "The Dark Knight". So it was exciting to see him not only pull off being completely convincing as the lead villain, but also looking the part!

There's some inconsistencies that this film has, such as, when Guerrero (Trejo) kills off his former gang members one at a time, they never show where their souls go. This left me a bit confused. When Guerrero dies towards the beginning and makes a deal with the devil, he's in hell instantly. However, once several of the gang is murdered at his hands, it shows several shots of Lucifer (Rourke) in hell walking around, but he's not in the company of the villains Guerrero has killed, although he's supposed to be collecting their souls. Makes no sense to me. Perhaps they're in limbo until all 6 souls are collected at once? That could be logical, but is kind of a throwaway theory once you see the end. 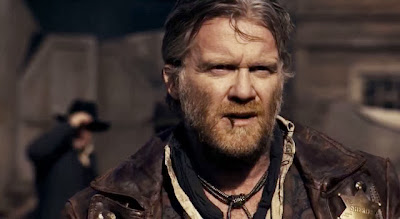 It may seem that there's a lot of negative things I have to say, but I actually did enjoy viewing it. And I found it to truthfully be a fun time, and a film that you can whip out and watch with the guys with beers chilling in the fridge and pizza is on its way. But, I think the need to make this such a violent action film caused the filmmakers to overlook several things, including performances. This is definitely worth a watch, and even an own, if you buy movies frequently. It's just not perfect, so know what you're getting into before you make that purchase. This movies passes my grades, but it's not worth any over-praising.