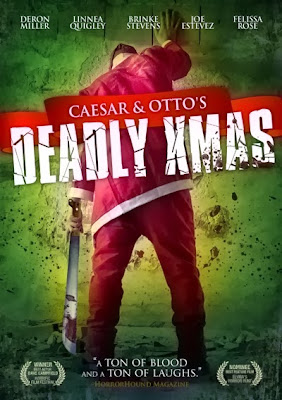 Synopsis taken from IMDb
Caesar and his half brother Otto take on duties as Santa and his elf. However, the bodies begin to pile up when a fellow store Santa (CKY's Deron Miller) develops a vendetta against them, he soon turns Caesar's list of dinner guests into a list of Xmas-inspired victims! Featuring cult movie icons, Linnea Quigley, Brinke Stevens, Lloyd Kaufman, Joe Estevez, Felicia Rose, and Robert Z'Dar.

Right when I thought I was going to have a weekend of nothing new to watch, my screener disc for "Caesar and Otto's Deadly Xmas" arrived. So, I was glad to have some new viewing material, and the fact that it's packed with cult stars I grew up watching only made me even more excited to give it a watch.

From the start, there's plenty of laughs to go around. This is the type of flick where you can tell if you're going to like it within just a few moments of watching. It's very low-budget, and those who aren't loyal horror fans may not like it's style. To put it simply, this movie is a B movie celebration, and a standing salute to the genre and all those who helped shaped horror into the powerhouse it's become. It doesn't take itself seriously, and because of that, doesn't lose focus of the motion picture that it is.

The dialogue between Caesar (Dave Campfield) and Otto (Paul Chomicki) is ridiculously funny and entertaining. They're two screw-ups who're constantly trying to out do one another. Even though they're close pals and half-brothers, they'll throw each other under the bus any chance they get to further their own lives. The entire concept is hilarious and entertaining. It never becomes really scary, it's more humorous than anything, and it's a hell of a lot of fun!

You just know things are going from bad to worse when Caesar's dinner list becomes a slay list by a store Santa who is previously insulted by Caesar. As the Santa played by Deron Miller starts scratching names off of the list one at a bloody time, it becomes apparent that Caesar and Otto better do something quick before they become the accused. 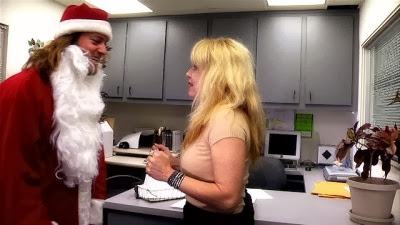 Seeing scream queen Linnea Quigley on screen never hurts, and it's always a pleasure to see her in new roles. As Donna Blackstone, she is an exaggerated version of herself. There's a really cool "Silent Night, Deadly Night" homage that any genre fan will get. My only complaint is that she isn't in the film enough! Robert Z'Dar (Maniac Cop) makes a cameo during the end credits that I thought was ingenious, and very humorous. I got a kick out of seeing him also play an over-the-top version of himself.

It seems everyone making this movie had a really good time and just got to be themselves. Of course, there's more cult actors and actresses than that included in the film, such as Felissa Rose who's known primarily for her role as Angela in the 80's slasher film, "Sleepaway Camp".

Starpower aside, this picture stands on its own as a new holiday classic full of blood and laughs that any genre fan should see this holiday season! Using limited resources, a B movie classic has just been birthed, and it's busted its way down my chimney and into my heart. As it will to most who see it.

So, if you like horror-comedies, slashers, and Christmas themed horror films, then you should give this a viewing. It's one I can see myself watching every year around the Christmas season while drinking some spiked eggnog and sharing some quality laughs with friends and family. I'll also be lifting my glass in a nod to all the actors and actresses involved in the film. 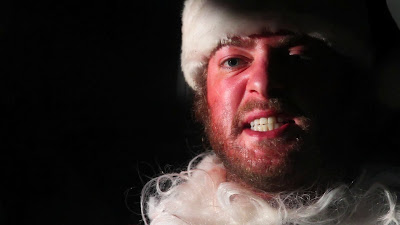 Though not a great film, this isn't  for those who are expecting the next epic horror flick. This is for those who can enjoy a throwback to the oldies and know when not to take a movie seriously, and just enjoy it.