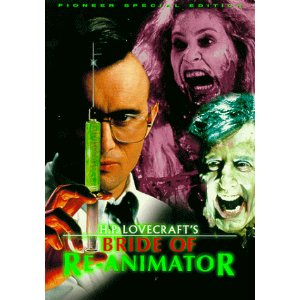 I was heartbroken by this sequel to be truthful. I love the first one as everybody does, so I was expecting this to be a good sequel. Had high hopes for it and got nothing but disapointment. I didn't find it nearly as funny as the first nor as entertaining, scary or enjoyable. To me this film was a big disapointment. Just as bad as Beyond Re-Animator...only I had hope for this one. After watching this I can honestly say that it would have been in their best interest to just leave it alone with the first.

I mean the first had a great ending, no real need to continue with lesser and lesser sequels. But that's a problem that many horror movies have and we all have to sometimes watch our favorite movies go to the gutter by ruining their reputations with horrible knock-off sequels. Re-Animator suffered this curse badly.

My opinion is to stick with just watching the first film. Don't disapoint yourself. I really could go on and on so let me stop here.

1 star is my verdict. Check out the trailer if you dare.