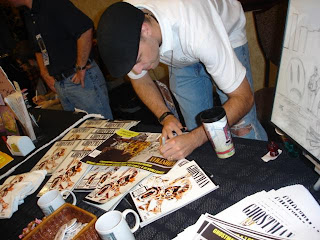 This week I had the pleasure of interviewing one of the most interesting and creative people I've ever know. After planning the interview Blair invited me to his beautiful, comfortable home to discuss his underground comic sensation Ghostman. Some of you may never have heard of Ghostman, and that's okay, but if you're an avid comic fan of comics and are looking for the next step in Superheros keep on reading.

While sitting in his studio I got to ask Blair what goes through the mind of the creator of such an interesting comic creation. Blair is a fantastic artist with a great knowledge of comic books, he's also a co-worker of mine. So it was good to get to put the work aside and talk about the good stuff.

For those of you who don't know, Ghostman is a independent supernatural thriller/action comic about a detective named Preston Cannon who is half human and half fallen angel. Not fallen like Lucifer, God picks an angel and puts them on earth as Preston Cannon's other half. And thus Preston Cannon becomes Ghostman and is constantly battling the evil forces unleashed on earth.

Be warned that this interview does have SPOILERS.

GR: Who do you credit for you becoming an artist?

BW: I'd have to go with my grandfather Joe Sheeran, he started me with art. He gave me my first pencils. Once I was 10, I go my 1st comic book. It was the 1st issue special edition of The Punisher.

GR: How did Ghostman come about?

BW: In 1999, I started writing a story. It just got bigger and I started dabbling with religion. Having peers commit suicide and wondering if you really go to hell for doing so really got me looking for answers and arose a few questions. Like is there a loophole? If someone had split personalities and only was half evil, how would he be treated by God or the Devil if he committed suicide to rid the world of his half evil existence.

It started as a detective story and evolved into spirits, and souls and where would you go? What if one side of you was a good cop and the other side a serial killer? I wanted a good solid base and origin. I wanted something deep that made sense and was a struggle between good and evil.

If you killed yourself is it possible to face yourself in Limbo? That was the beginning.


GR: What comics did you grow up reading?


GR: How many hours a week do you spend working on the comic? I see you at work always working on it every chance and break you get.

BW: I usually do 2 to 3 hours a day. If I'm not drawing I focus on the writing. All of my villains are from history, tons of research is done to make it possible. Then I add my twist to them. 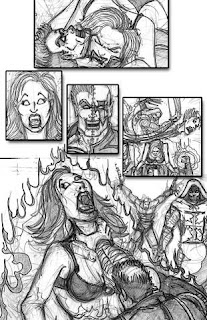 BW: I don't take classic, I do it until it's perfect. I'm not trying to touch fame, I just want people to read it. My fans always have an influence on me and my work.


GR: You mention your Grandfather Joe Sheeran, the late, great owner of our workplace influenced you. How long have you been drawing?

BW: I officially threw myself into it in December 2ND 1993. I was working on a comic with several other kids my age. It was a fun experience.

GR: Would you consider Ghostman to be somewhat of you child? I mean this of course because I know you're very enveloped in this character and I can only imagine how it's become sort of a child to you. You're creation.

BW: Absolutely. All the time and hard work I put into it just to see it happen. It's my baby.


GR: What can be expected from Ghostman in the future?

BW: Continue with The Devil's Seven. The Devil's Seven are 7 souls of the most horrendous and evil people and they're plagued upon earth. I always want Ghostman to fight something. There should be humor and darkness at the climax. There's alot of humor in Ghostman but it's equally as dark I guess you could say. 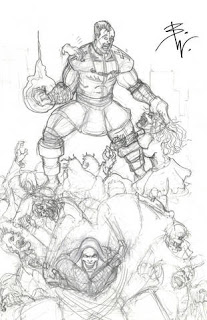 GR: Now you mentioned a crossover going on in the Ghostman series. Can you explain?
BW: I met Patrick Thomas at a signing and we discussed comics. He always wanted to do a comic book. I told him to write up a story (since he's a phenomenal writer) and we collaborated. I came up with a villain, the "Moon Maniac". This ghost of a serial killer from history Albert Fish, comes back to terrorize. It really worked well with Ghostman and the villains he usually takes on. It came about after Patrick Thomas asked me to do some illustrations in one of his books.


GR: In your own words why should people reading this read Ghostman?

BW: To be entertained. In today's society we need a new hero. Not the common hero. It's all new characters and an all new concept. This isn't just what sells or makes money. I wanted to go a new route. I'd like more comics to be the same way.

It's all about the new stuff. There are so many new Superheros out there now. More modern. Just go to a small press expo and see all the ideas people are coming up with. It's incredible and inspiring.


It was very inspiring to get to talk with Blair and have this sit-down. It opened my eyes to alot of new things and gave me an even higher respect of the guy. He's a talented dude and he deserves the credit and I thank him for giving me his time as well as welcoming me into his home. He's a class act and if you're into comic books there's no reason why you shouldn't give his books a shot.