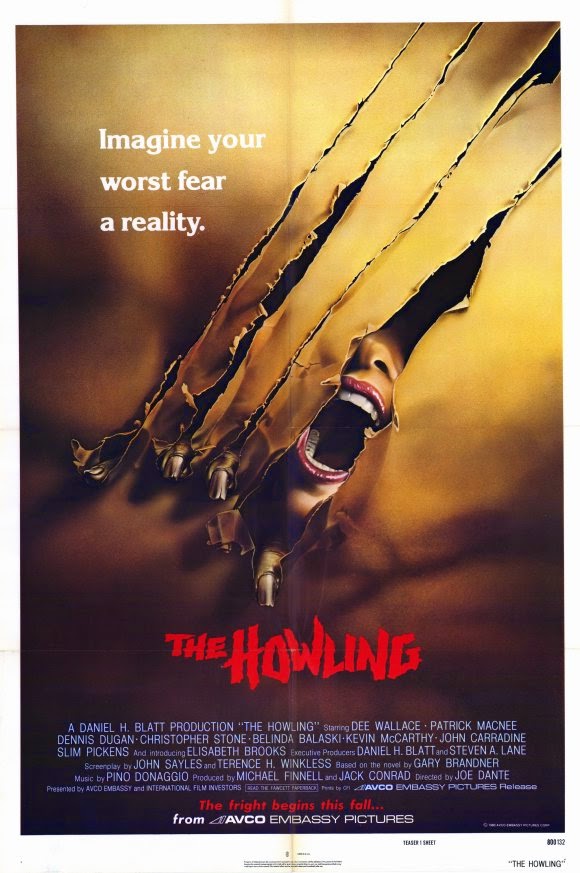 Synopsis taken from IMDb
After a bizarre and near fatal encounter with a serial killer, a television newswoman is sent to a remote mountain resort whose residents may not be what they seem.


Although based on the 1977 fiction novel of the same title by the late Gary Brandner (May 31, 1930-September 22, 2013), "The Howling" film is almost nothing like the book. It's very loosely-based, to put it modestly.  And after the success of the 1981 motion picture directed by Joe Dante (Gremlins), it spawned six sequels and a reboot in 2011. With each sequel decreasing in merit more than the previous installment before it, it wasn't until the fourth movie "Howling IV: The Original Nightmare" (1988) that Gary Brander's novel got a real adaptation that didn't digress his work. Just a shame the movie sucked.

After watching "The Howling" with commentary by Gary Brandner, I came to find out that director Joe Dante was completely against Brandner's work, and was a big part in the motion picture not resembling his novel. I also learned that Gary Brander called Dante out about it, and it was apparent they weren't fond of each other. Brandner claims he was a far bigger and taller man than Dante, and Dante backed off bad-mouthing him after a short confrontation.

Regardless of the dispute, it's apparent that Dante was the correct one of the two. No disrespect to Brandner's novel, but the movie blows the book out of the water. I was in my teenage years when I first saw "The Howling". I believe I was between 12 and 14 years old when I watched it on VHS with my mom in our living room. And ever since, I've not only been a fan, but the original one-sheet to this day, remains my favorite poster art ever for an 80's horror film. The makeup FX were done by the uber-talented Rob Bottin (The Thing)  after original makeup designer, and legend Rick Baker (The Funhouse) left to do the work needed on "An American Werewolf in London".


Coincidentally, both "An American Werewolf in London" and "The Howling" were up for an Academy Award for Best Makeup and Hairstyling. Unfortunately for "The Howling", John Landis' werewolf classic took home the award. Bottin would later be nominated for an Oscar, and win the Special Achievement Award at the Academy Awards in 1991. Regardless of which movie you like more, they're always neck-and-neck, and considered to be the greatest lycanthrope films ever. Funny how they came out in the same year. Whenever you hear horror fans talking (arguing), about these two flicks, the debate is always constant.

I will always fall on the side of "An American Werewolf in London", and I also tend to like "Silver Bullet" more than the "The Howling". But they're all classics, really.

Beloved horror actress, Dee Wallace plays the distraught Karen White, who had a near-fatal incident with serial murderer named Eddie Quist (Robert Picardo). After taking advice from her therapist, Dr. George Wagner (Patrick Macnee), Karen and her husband (Dee Wallace's husband in real life), Bill Neill  (Christopher Stone) (October 4, 1942-October 20, 1995) , go to a secluded resort in the countryside called "The Colony", a place where Dr. Wagner sends his patients for healing. But things only get worse as the company they meet, gets weirder and weirder. Marsha Quist (Elizabeth Brooks) is a nymphomaniac, and soon seduces Karen's husband. Not only do they make love, but she also turns Bill into a werewolf.


With Karen and Bill's relationship circling the drain, it becomes clear that staying at "The Colony" was a bad idea. And Karen has her best friend, Terri Fisher (Belinda Balaski) and her boyfriend, Chris Holloran (Dennis Dugan) for help in finding answers to connect Eddie Quist to "The Colony". However, things don't play out so well for Terri and Chris as Terri is killed in one of the best moments in the entire film, by none other than Eddie Quist in werewolf form. But it isn't until Karen accidentally runs into Eddie, that we get to see the epic and unforgettable transformation scene. Eddie transforming into a wolf is a long, slow process, but it's fun as hell to look at.

After soon discovering that the whole colony are lycans, it's left up to Karen and Chris to fend them off and get away safe. Unfortunately, during their escape, Karen is bitten by her husband. Rather than just off herself right there, she and Chris conspire to have her transform into a werewolf on live TV, so they can show the world their story and make everyone aware that werewolves are real.

"The Howling" is a timeless classic, and has only gotten sweeter with age. Especially nowadays when every werewolf movie is a trained wolf (boring) or a CGI monster (lame), it's good to go back and watch how it was done by the pros who didn't half-ass their work, and took the hard route for results and because they didn't have computer technology back then, like we do today. From experience, let me tell you that there is no finer way of watching this monumental werewolf classic than on Shout! Factory's collectors edition Blu-ray (click link at the beginning of review). The picture is as clear as it's gonna get, and the sound is damn near perfect. You'll get no complaints watching it this way, trust me.


BEST SCENE: Definitely the 'transformation scene'. Aside from the perfect special effects in "An American Werewolf in London", we haven't seen a transformation scene like this one. Although I don't like the rabbit ears, the overall design is terrifying. Rick Bottin actually used condoms that he blew air into using a pump of some sort to get the puffing swelling look that begins the transformation.


BEST QUOTE: I've gotta give this to Karen, when she said "A secret society exists, and is living among all of us. They are neither people nor animals, but something in-between." 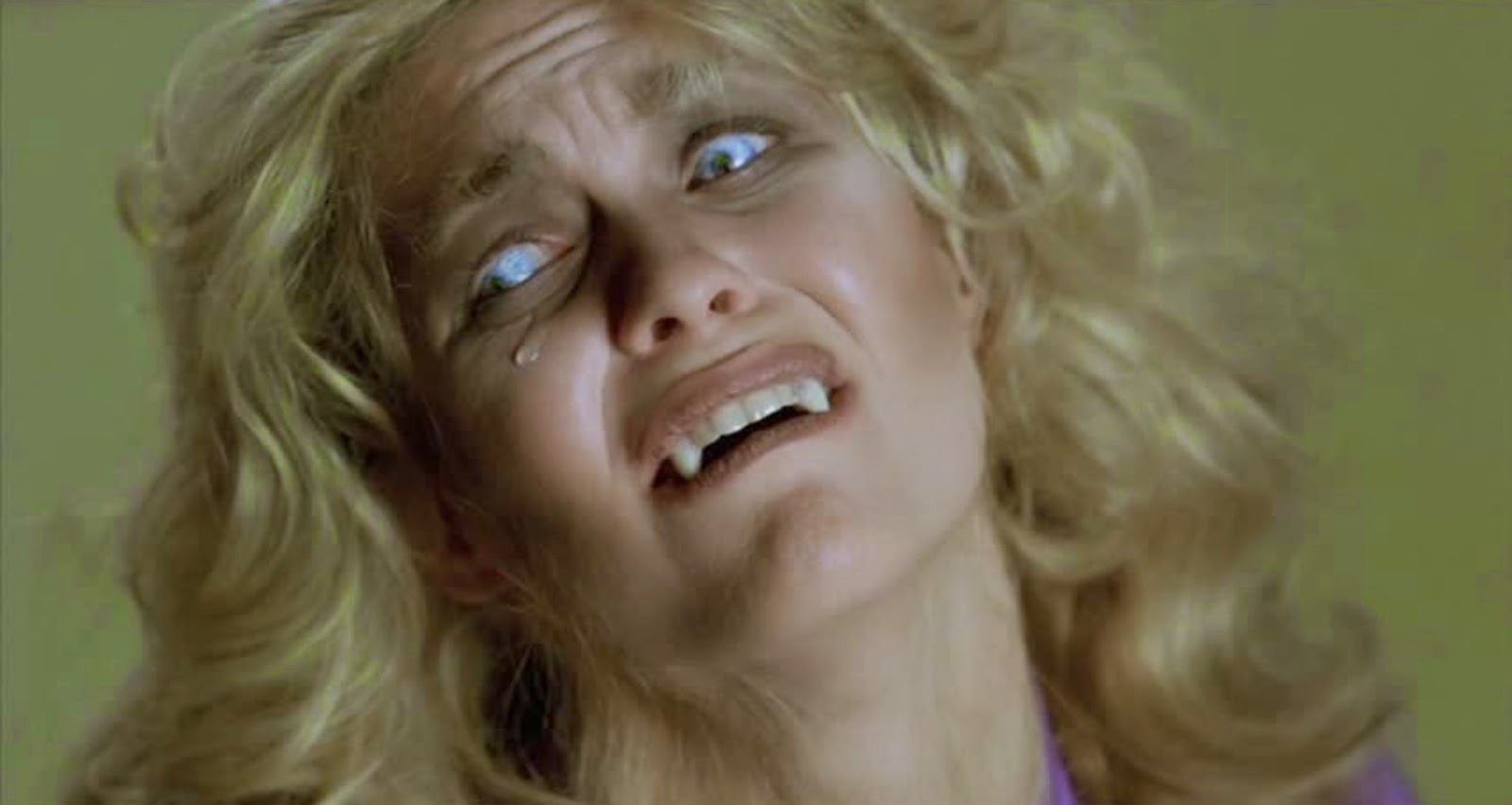