Let The Right One In (Book Review) 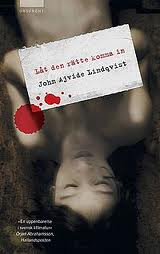 Synopsis taken from book cover
Oskar and Eli. In very different ways, they were both victims. Which is why, against the odds, they become friends.

And how they came to depend on one another, for life itself.

Oskay is a 12 year old boy living with his mother on a dreary housing estate at the city's edge. He dreams about his absentee father, gets bullied at school, and wets himself when he's frightened.

Eli is the young girl who moves in next door. She doesn't go to school and never leaves the flat by day. She is a 200 year old vampire, frozen in childhood, and condemned to live on a diet of fresh blood.

I've seen both film adaptations to this novel and I liked them both, I do favor the American version over the original Swedish version though. After having questions about the films with no presumable answers, I did some reading online and found out that the big picture was in reading the book. So I was sold, I bought a copy and flew through it. I was very impressed and think the book is better than both films.

I love how dark this book is, there's nothing glorified or pretty about it. It's dark and mean, even depressing. John Lindqvist has a great vision for vampires and nails it in this book, giving us a fresh story with lots of layers. It's grotesque at parts, but it's exquisitely written and detailed. This book is a drama one second and scaring you the next, I love how it switches up on you.

This is one of those books that pushes boundaries, I loved it for that because I didn't expect it to go to the places it goes. It's relentless. Some of the things that happen in this book kept it glued to my hand, I couldn't stop reading. You don't think it's going to go as far as it does.

The fact that this is an original, dark story automatically intrigued me, because here is a book that finally gets it right. Lindqvist makes the reader know and understand how being a vampire isn't about getting laid and being a ladies man. It isn't about living the life of a rock star, recklessly. It's about survival. It's about staying low key and just getting by. It is a curse and it's a curse you don't want, which is how it should be.

Today's society thinks it's cool to be a vampire due to all the fangirls and boys of pop culture cinema. Let The Right One In is a real vampire book.

It can be downright chilling and shocking, not what I was expecting. I was enthralled in it. It has it's scary parts and overall it's just a damn solid story. Everything about this story works. I'm sure that while reading this my eyes were bulging out at points and I probably had some laughable facial expressions.

By far my favorite part of the book was the explanation of the disease. Lindqvist really paints a picture for you, explaining how it takes part in the circulatory system and centers in the heart. If you don't feed you look like hell and stink like a corpse, but when you feed you look rejuvenated and don't stink. This may be my favorite telling of vampirism.

There are some characters in the book that are not in the movies, so this was fresh for me. Added to the all around good storytelling. The book really gets you inside of Oskar's head and you understand him on a new level. In the book he keeps a piece of mattress foam in his pants to catch the urine he dispels, which is something new that I wasn't expecting from this story. I also liked how you get to see Oskar's relationship with his father, you really see why this kid is screwed up.

Eli is one of the best vampire characters I've ever encountered in a book or on screen. Her back story is twisted and dark, she's cursed with being a vampire and is incredibly lonely. She has a big secret that I'm not going to ruin if you haven't read this book or seen the film versions, but her character is well done and you really sympathize with her.

Hakan, Eli's watcher is a middle aged man who's a pedophile. He hates what he is and is disgusted with himself. He even wishes for death. His character was the biggest improvement in the book over the movies, I can see why they'd have to cut out a lot of what his character does and goes through for the films though.

Tommy, Oskar's neighbor is a big part of the book as well. His part is really interesting and you can see that his part is building up to something big, and it's a good payoff.

Let The Right One In is one of those books that will be remembered for a long time. It's a staple in vampire literature. It's a good read for fans of vampires, especially those looking for a true, traditional type of vampire book.

THIS BOOK GETS 4 REAPER SKULLS OUT OF 5