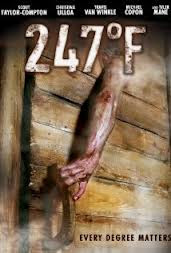 
Synopsis taken from IMDb
Jenna, Renee, Ian and Michael arrive at a lakeside cabin owned by Ian's uncle, Wade. Intending to enjoy a carefree weekend, instead, three of them become locked in the hot sauna. First they think it's Michael playing jokes on them, but soon realize that help is not coming and they must find a way out before the heat kills them. As the heat rises they are pushed to their physical psychological limits- staying alive is not easy any more. Breaking a small window- may be the worst thing they can do, because cool air will trick the thermostat to run the heater full blast. They need to get out, but all they can do is wait! Wait for what, wait for who?! How long could you wait in the heat up to 250 degrees Fahrenheit.


In a world where survival horror is hitting a peak, they throw another log on the fire (no pun intended). This is pretty much the exact opposite of Adam Green's Frozen (2010), in this film these teen suffer from extreme heat instead of freezing. However, what surprised me was that it actually not bad.

The cast has it's strong points, but it's overacted at other parts. Still, all in all, you see that this cast is somewhat strong. Travis Van Winkle and Scout Taylor-Compton stand out amongst the rest of the cast. Although Scout does do some of that overacting I mentioned, Travis does a really good job in this film. He was a very likable character. 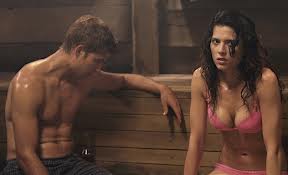 While uncle Wade's away the party begins. Ian and Mike do some heavy drinking and decide to go into Wade's sauna for some relaxation. Mike and his girlfriend Renee (Christina Ulloa) hope for Ian and Jenna to hook up. Renee wants Jenna to move on and stop living in the past, letting it drag her down. 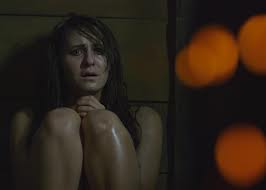 Michael leaves the sauna in a drunken stupor, leaving his friends and girlfriend to laugh at his expense. After a few moments pass we hear Mike walking into some things and something heavy his the door. Ian, Jenna and Renee try to get out of the sauna, but their laughs and joking become screams for help very quickly.

I like the realness this movie portrays. I think that it's done very accurately and I don't know if there's anything I can pick out about it that wasn't accurate. This is a atmospheric horror film, it centers on the claustrophobia of the situation. Ian of course, is the smart one of the group, keeping them all alive with his knowledge of the downside of their situation. 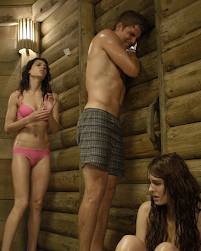 There isn't hardly any character development due to their situation. There isn't much time to focus on anything but them in current time. The cast does a good job at keeping us entertained though and the movie doesn't have any boring parts. Seeing how calm Ian remains is incomprehensible to me, considering how Renee is constantly being rude and making things worse with her attitude and mouth, I did not like that character. She was that whiny character you wait to get killed off.

All the while, Michael is no where to be seen and uncle Wade is off doing the fireworks downtown.

The movie gets pretty intense with some parts that are tough to watch. I was impressed as the story unwound, and if this story teaches you anything, it's that it isn't always cool to get drunk and act like an idiot. Sometimes there's consequences to pay. 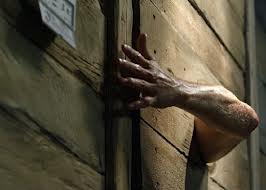 Ultimately this film is entertaining and good at making you feel the severity of their situation. The acting was good enough and pulled the story through. It's a crazy situation their in and it makes you realize how easy it is to be in a life or death situation from things you commonly use and wouldn't ever consider harmful.

Now this film isn't perfect, it has its many flaws. It's better than a lot of other survival horror films, though.