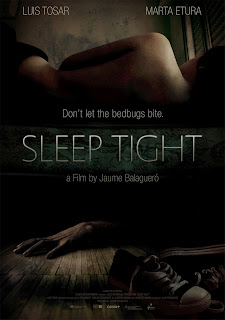 Synopsis taken from IMDb
You wake up day after day to the comfort and security of your home. But how safe is it really?

Sleep Tight is a Spanish horror film that was developed under the title Flatmate.

The film centers around Cesar (Luis Tosar), an apartment building manager. Cesar is a very depressed man. The film starts with Cesar narrating, saying how unhappy he is and how he has never ever been happy, not once.

Cesar is fixated on a tenant named Clara (Marta Etura), she's got a beautiful smile and always appears to be in a happy mood, the ideal girl. She's also very nice to Cesar. 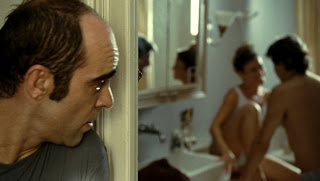 Marta starts looking rough and disheveled in the mornings, when Cesar asks her what's the matter she says she doesn't think she's sleeping right and is tired. Even though she gets plenty of sleep.

Little does Marta know that Cesar is to blame. Cesar is sneaking into her room every night and hiding under her bed. He waits for her to fall asleep and then uses chloroform to keep her unconscious so he can crawl into bed beside her and cuddle with her.

Cesar does this night after night until one night when he hears Clara making fun of him on the phone to her boyfriend. After this he decides it's time for Clara and himself to step things up, take things further... 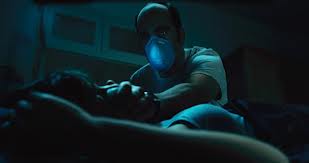 Throughout the whole film Cesar is blackmailed by a little girl living in one of the apartments, she's onto him and uses that to get what she wants. This really added a good dimension to the film, keeping it very suspenseful.

When Clara brings her boyfriend over it only makes things more hectic and complicated. This is when the film picks up and really starts hitting hard. Clara's boyfriend isn't as blind when it comes to Cesar, he knows he's suspicious and doesn't like him.

This film comes off like an Alfred Hitchcock movie, it's brilliant! It's slow paced and takes its time building up. The suspense is nothing less than nail biting. It can be paralyzing. There are some good jumps as well. 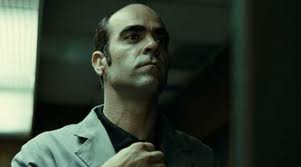 What makes this film so terrifying is the realism of it. It taps a core nerve, the fear of invasion, living your life while someone obsesses over you and knows your every day routine. Someone being in your home night after night without you ever knowing.

The acting in this movie was great, Luis Tosar did put on a powerhouse performance. There are scenes with his mother where you get to see a more emotional side of Cesar, get to see what's in his head and how he thinks. Tosar's performance sells this movie, he's the main focus and carries the movie.

This movie is a gem and should be seen by any fan of the genre. It's one of those movies that creeps you out days after you've seen it. Sleep Tight will keep you looking over your shoulder...or under your bed.