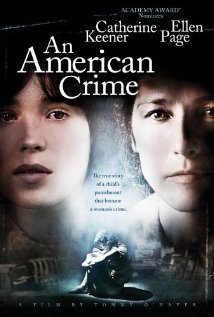 Synopsis taken from IMDb
The true story of suburban housewife Gertrude Baniszewski, who kept a teenage girl locked in the basement of her Indiana home during the 1960s.


STORY: I watch horror movies on a regular basis. All types of horror. As a horror fan, every now and again you find a movie that will push you to look away from the screen or at least make you think you're going to have to turn your head. I've got an iron stomach and have seen it all, but this is one that I found to be hard to watch. And this isn't a horror movie. It's a drama.

The movie starts off in a courtroom with the prosecution of Gertrude underway. As the movie goes on we get bits and pieces of the trial to tie in what we aren't shown throughout the movie.

Sylvia Likens (Ellen Page) and her younger sister Jenny (Hayley McFarland) are left with a single mom of several children named Gertrude (Catherine Keener) when their parents go on tour together on the carnival circuit. Sylvia and Jenny get along with Gertrude and her children right away, but Gertrude's financial status starts to disrupt the peace in the house. Sylvia and Jenny's parents made a deal to pay Gertrude for taking care of them while their away, but it starts to not be enough. Sinking Gertrude deeper into a stressful life of debt. The situation only gets worse when rumors start to spread that her daughter is pregnant and she fingers Sylvia as the culprit.

You can tell that the tension was building because for the first half of the movie Gertrude seems like an honest, church going lady who loves her kids. She comes off as a great mom who's dealing with hard times. As the movie goes on, we see her darker side and we realize that she's a monster. First she beats Sylvia and her sister Jenny with a belt because their parents check didn't arrive in time, Sylvia takes most of the punishment to spare her sister. Gertrude becomes obsessed with the idea that Sylvia is corrupt and a bad influence on her daughter, which couldn't be farther from the truth. Sylvia is a quiet girl with good manners and very friendly.

After hearing that Sylvia is spreading more lies about her daughter, Gertrude starts to make Sylvia's punishments public. Doing them in front of all of her many children and even some of the neighbors. She puts cigarettes out on her and goes as far as making Sylvia put a glass Coke bottle up her vagina in front of the crowd of children and neighbors. She makes them all watch as a means to "teach them a lesson", she uses Sylvia as an example of why not to be a bad kid. Only Sylvia is far from a bad kid and she's undeserving of everything she gets. Eventually Gertrude has Sylvia thrown down into the basement and locks her in.

Gertrude's children and all of their friends and neighbors start coming over to the house every day and they all partake in Sylvia's torture. They put cigarettes out on her and carve on her and beat her as well as mock her and make fun of her. All the while, Sylvia isn't fed or given anything to drink.

The ending of this film is deep and troubling. Sylvia breaks out of the house and finds her parents. Once she returns to Gertrude's house to get her sister, she walks in on Gertrude's children screaming that "she's dying!". We're lead to believe that they're talking about Jenny, only when the camera pans back we see it's Sylvia that's dead. She never escaped at all, it was all a dream or a fantasy. This was a major twist and shocker, I didn't see it coming but luckily her death is the downfall of Gertrude.

ACTING/PERFORMANCES: The acting in this movie is really good and impressive. The casts performances are what sells the movie and makes it believable. Ellen Page and Catherine Keener rock it and Catherine Keener shows that she has some serious hidden acting ability that we should see more often.

TORTURE/GORE: There hardly was any gore and the violence was actually rare and not graphic. They don't show you what all they do to Sylvia, just bits and pieces to get the point across and they do it well. As I said earlier, I found it hard to watch at points and they hardly show anything! Just knowing what they're doing to this poor innocent girl is enough to make your skin crawl and it made me sick to my stomach.

OVERALL: This film boils down the basics. When the leash we wear for society comes off behind closed doors we're animals. When we think we can get away with it we'll do anything we can, regardless of how sick, twisted and bad it is. Any chance we get to exercise our sickness inside we take, even if it means joining in on the ongoing and undeserving torture of an innocent and sweet girl. It's a reminder of how sick people can be and how sometimes the undeserving have to get the wrong end of the stick. Knowing this movie is based on a true story sickens me and Gertrude got everything she deserved and deserved worse.

Gertrude should have gotten the death penalty. I was glad to see everyone who took part of this madness get their just desserts as well. An American Crime is a very good movie but not something I could watch very often. Give me a guy cutting people up with a machete at a camp site any day of the week, but torturing an innocent child? That's not my thing.