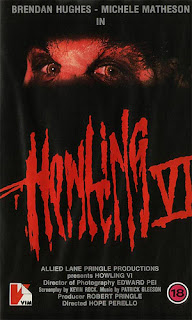 "Vampire vs. Werewolf
The Ultimate Clash of the Forces of Evil"

Synopsis taken from IMDb
A villainous carnival owner traps a young werewolf to include in his growing menagerie of inhuman exhibits.

STORY: I'm back with another round of abuse for myself. I'm a glutton for punishment, as I said before. I've seen all of the Howling films except V and VI, up until recently. I should have called it quits after the 3rd film and I wanted to, but my OCD wouldn't allow me to not finish the series. Christ, almighty.

This film focuses on a drifter named Ian who stops in a small town and takes up a job working on rebuilding the town church. He's known to the town instantly as a good worker and has everyone's attention since he's the mysterious new guy in town. One night when the full moon arises we see Ian change into a werewolf and my God is it awful looking. It doesn't look like a werewolf at all, I don't know what the hell it looks like but it's absolutely terrible. While out roaming, a freak from the circus sees Ian as a wolfman and reports it to his boss, R.B. Harker.

Harker imprisons Ian and uses him as a freak in his hideous display for his carnival business. While locked up, Ian is abused and mentally tortured and picked on. Of course, we all knew that he was going to escape and have his big battle to freedom. It's completely predictable and tasteless. I knew from the go that Harker was a vampire and I think they made it very obvious, even if they didn't mean to.

Ian and Harker battle it out for superiority and dominance. With a stake and a heavy, lethal dose of direct sunlight Ian pulls off the victory. Now he's off on the road again traveling. Until he passes the next town worth stopping in.

ACTING/PERFORMANCES: The acting in this movie was dry and boring. It wasn't convincing at all. I guess all the actors knew this movie was such a piece of crap, they just signed on for the paycheck. Ian is made out to be sympathized with but to be honest, I couldn't care less what happened to anyone in this movie.

KILLS/GORE: The gore was sparse and the kills were generic as well as the ridiculous fight scene at the end. I really don't know what went through the people making this film's minds. There wasn't a single scene that stood out to me.

OVERALL: This movie is a dare to watch. A dare to see if you'll fall asleep or turn it off before it's over. I somehow survived but I will never watch this again. I haven't seen a movie this bad in a while so I'm pissed it ruined my good movie streak. I'm going to wash this bad taste out of my mouth with a viewing of An American Werewolf in London. Beware of this movie, it bites. 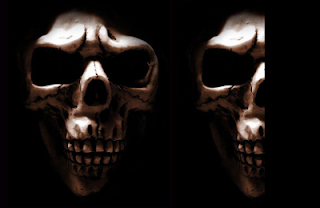