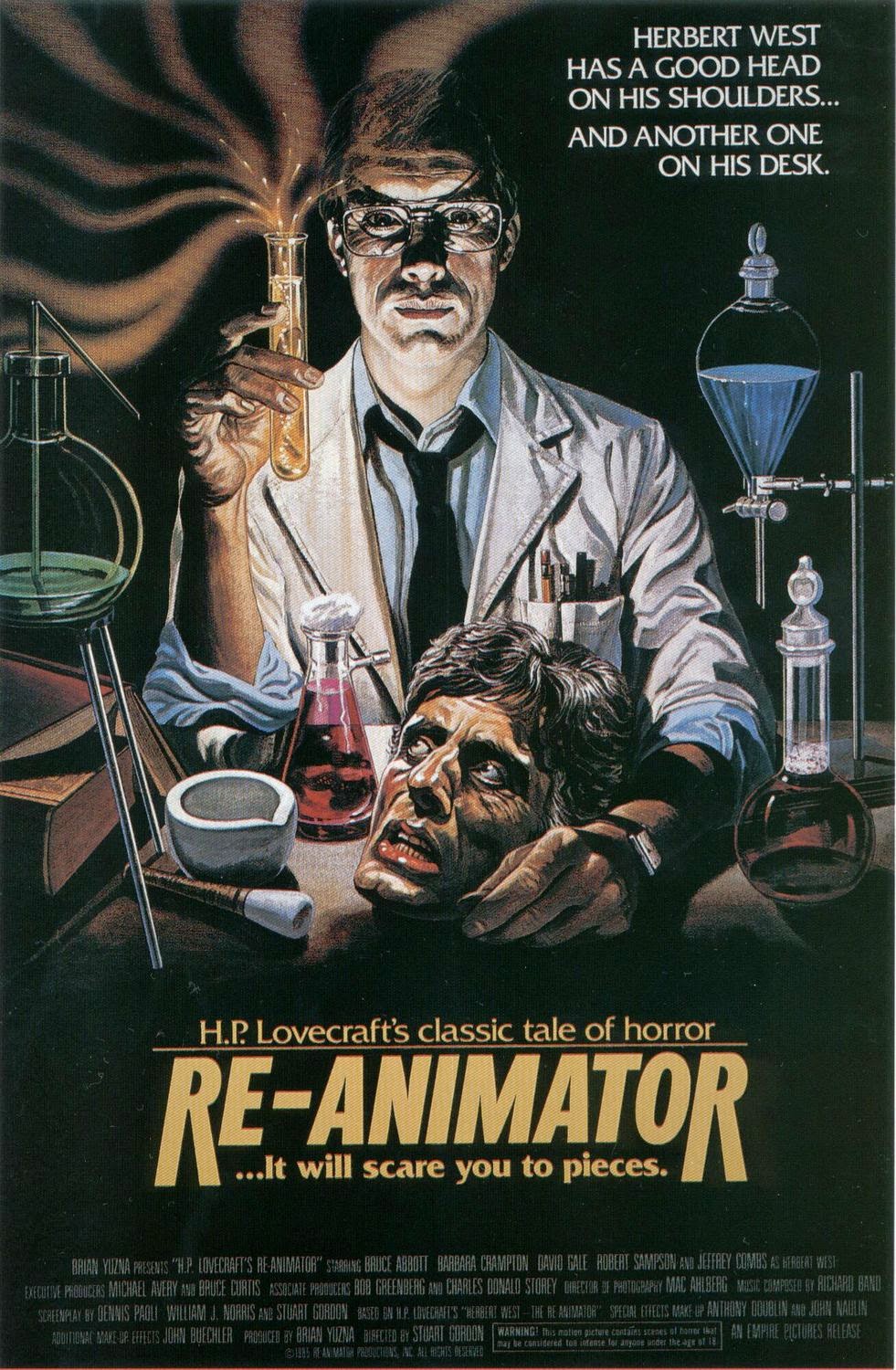 Synopsis taken from IMDb
A dedicated student at a medical college and his girlfriend become involved in bizarre experiments centering around the re-animation of dead tissue when an odd new student arrives on campus.


I honestly never see the point in reviewing films past a certain age. I mean, who wants to read a review about a film from 30 years ago that we've all already seen dozens of times over by now? Not a lot of people, including myself. I usually only post reviews on old movies if I've just watched them for the first time, otherwise I've got no interest. However, with this Throwback Thursday going on, I figured it would be a cool chance for me to get the opportunity to review older films that I hold dear to me, and that I've had no point in reviewing up until now. So, from here on out (at least until this Throwback Thursday thing dies) I'll be posting a review to a throwback movie.

I first found 'Re-Animator' six or seven years ago while talking to a movie buff at a flea market. He told me how I was "missing out" and how I need to see it sooner than later. After hearing all of his hype for the film, I went to the mall and bought the nicest copy of the DVD that I could find, in hopes that I wouldn't hate it and it'd be as good as he (and many others) have said. My DVD came with a cool needle accessory that kinda sold me on the whole thing. When I got home that evening, I watched it and was blown away. I really had been missing out!

I watched the film twice in a row, followed by all the bonus stuff. I even went looking online for action figures, in which there's none and that still bothers me. Do you know how many people would want to own a Herbert West figure? I know I would! That being said, I became an instant fan of the film, and I saw it's appeal. And I truly believe that if you're a true fan of the genre, the appeal of this movie is obvious. It takes you back to a time when horror was fun, and not just about how cruel, extreme, brutal, and daring it can be.

"I gave him life!" The gore fest that is 'Re-Animator' starts with one of the best horror film openings ever. Instantly, you know what your in for after only watching about three or four minutes. You know from the jump what kind of movie it is, and if you'll like it within that short span of time. Then not to mention the 'Psycho' rip-off theme for the opening credits. Funny thing is, I never really placed that the opening theme was a total knockoff until I listened to the commentary and heard director Stuart Gordon mention it jokingly.

Just about all of the characters are likable, even Dr. Hill played by the late David Gale. When Herbert West (Jeffrey Combs) constantly challenges Dr. Hill, you know things aren't going to end well for one of them, and as it turned out, it didn't go well for either of them. In the end their egos get the better of them and it costs them both dearly. While other cast members weren't as charismatic on screen as Combs' and Gale's characters, everyone offered something great that added to the movies brilliance. Bruce Abbott did a great job at playing the grounded and relatable Dan Cain.
And his girlfriend Meg, played by the lovely Barbara Crampton is the only one in the film who seems to be thinking with a clear head. I mean, she warns Dan about letting Herbert move in, and compels him to think before he acts, but to no avail. And of course there's some Crampton nudity that made every horror fanboy (including myself) find a second love for the movie.

But more about Herbert now. He's the weirdo you want to be. He's the rebel in a sense, and the cool kid, even though he's a total creep. It's amazing how even the weirdos can be the heroes if you give them good character story and find a good actor to play the part. Although Jeffrey Combs is a phenomenal actor and has done many different kind of roles, he'll always be Herbert West. He put a face on a character loved by many, there's no going back from that. And what a lovely way to be remembered.

One particular scene that I've got to mention is when Meg's cat is found in Herbert's refrigerator and is later re-animated in the basement. It's one of the cruelest scenes I've seen in horror films, and while I am a cat lover, I can't help but laugh hysterically when it gets spiked on the wall after attacking Dan and Herbert. It's one of the best scenes in the film both because you get to see that Herbert's serum does work, and because you get to see the aftermath of his madness, much like in the opening scene of the film. But more importantly, it's when Herbert really gets a grasp on Dan, and things go downhill quickly.

I really like how although it's labeled a zombie film, that they're not typical shoot-'em-in-the-head-zombies. The dead do come back to life, but they have senses and memory even. That's just one of the many things different about this film than most, and why it still stands as a juggernaut today in the genre. Creativity goes a long way.

After the crude beheading by Herbert, Professor Hill reclaims his head in a hilarious scene and steal Herbert's work to make an army of the undead of his own. This of course, leads to one of the most memorable scenes in horror film history, and easily the best scene to come from 'Re-Animator': the "head" scene with Meg and Professor Hill. It's so creepy and gross, yet comedic and entertaining. It's so gross you have to watch! I actually learned on one of the commentaries that Barbara Crampton found out someone at a convention she was at was selling photos from that particular scene, and she went over to the guy and took his pile of photos of her he was selling. I guess if the shoe was on the other foot, I wouldn't want to be known mostly for a scene like that, and I wouldn't want people flaunting it around. But you can't deny what a great scene it is, and what a legend Crampton has become because of the overall quality of her performance in the movie.

I also learned that at the end, when Hill's army of re-animated start raising hell on Herbert, Dan, and Meg, that there was a lot of re shooting and/or editing (can't remember which) done because of the fact that there was such an abundance of male genitalia. Small things like that get a laugh out of me. I can only imagine how hard it was to have so many naked men in front the camera and not get too many gratuitous shots. But they rocked it, and the end result works just fine. Just the simple things you run into while filming a movie that you wouldn't think of. Pretty hilarious.

The ending is expected, but it wouldn't have been such a great film without it. There are so many iconic and memorable scenes from this movie that if I were to mention them, I'd have to describe the full movie from beginning to end and basically write the screenplay (laugh). Truth is, 'Re-Animator' is an ageless film that will be talked about forever. It was a groundbreaking film when it came out, and it still lives up to its name and reputation in present time. It has a fantastic sense of humor, and regardless of how old or outdated the FX are, it's an endearing film. There was no cgi of any sort.
I appreciate movies back then more than ones today because they didn't have the option of cheapening out and taking the short cut of computer effects. No, what you see is what you get 100%, and no cgi can ever change the authenticity older films have, and that newer films will never have. It's one of the greatest horror comedies of all-time, and genius film making in an unappreciated genre.