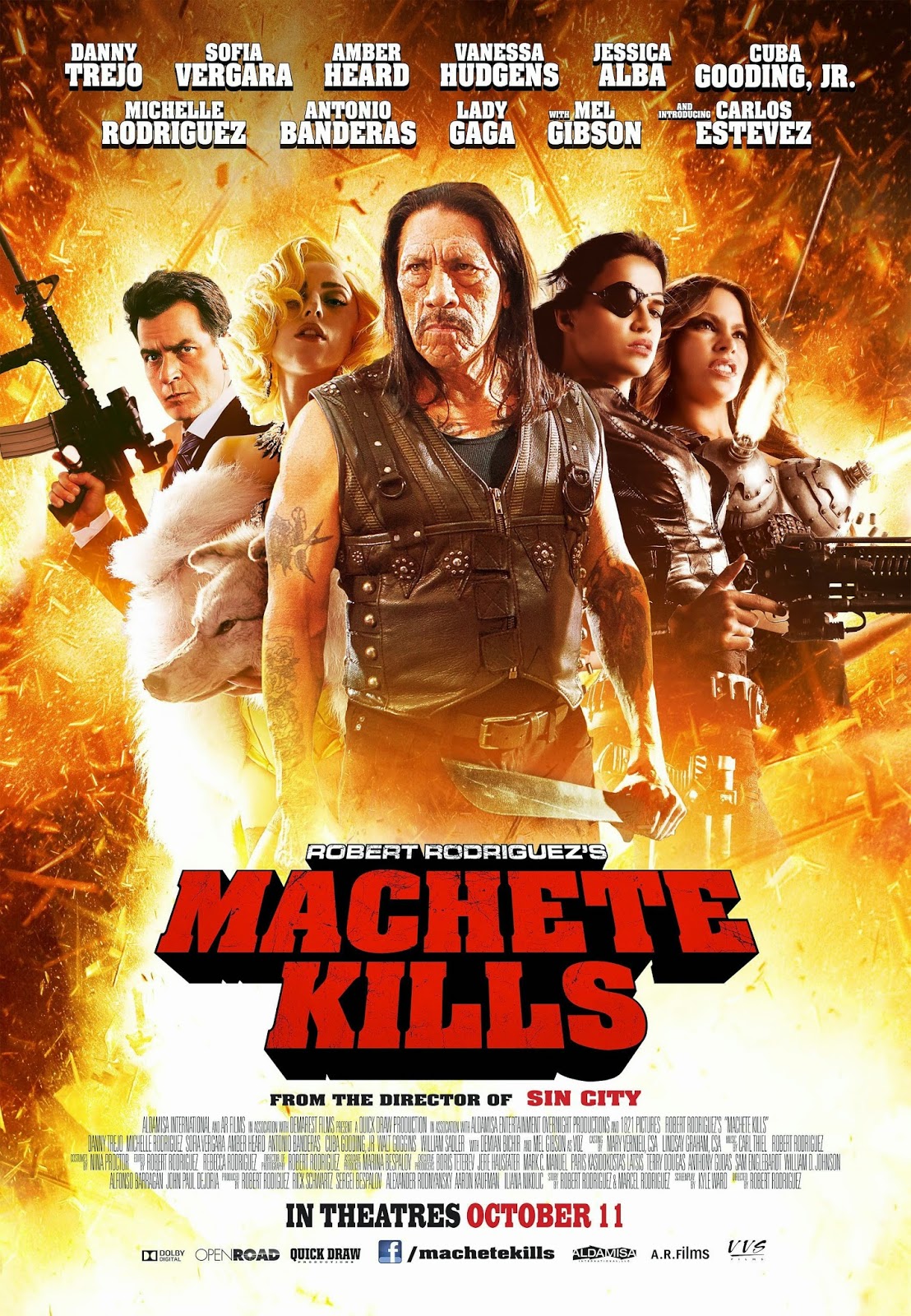 Synopsis taken from IMDb
The U.S. government recruits Machete to battle his way through Mexico in order to take down an arms dealer who looks to launch a weapon into space.


Ever since Robert Rodriguez and Quentin Tarantino's Grindhouse double feature landed in 2007, I've been a fan of both films. I've also been a fan of "Machete" ever since the fake trailer in "Planet Terror", and I thoroughly enjoyed the first movie.

The biggest complaints that I hear about "Machete Kills" is that it's "cheesy" and "ridiculous". However, I came to find that those who make those remarks are just as idiotic as those statements. Anyone who's a fan of cinema, and watched the Grindhouse films, knows that these flicks are nods to the old 70's exploitation films. And back then, they didn't have all the money and fancy techniques that we have today. So, these films are totally authentic to match how things were done back in the day. So no, I don't want to hear any crap about how over-the-top it is.

If you don't like it because it looks like an old movie, that means you don't like older movies. And if you don't like old movies, or black and white films, or subtitles, then I'm glad to tell ya that you aren't a true film fan or buff. Real movie fans watch anything. Those who only watch films from the last ten years, aren't in my league, and this movie goes right over their heads.

Now on the other hand, if you dislike this motion picture for another reason(s), then you're allowed to have your own opinion. Can't please them all. I can appreciate someone who can take a step back from a movie and really assess it, not just discredit it because of nonsense reasons, regardless of if you like it or not. 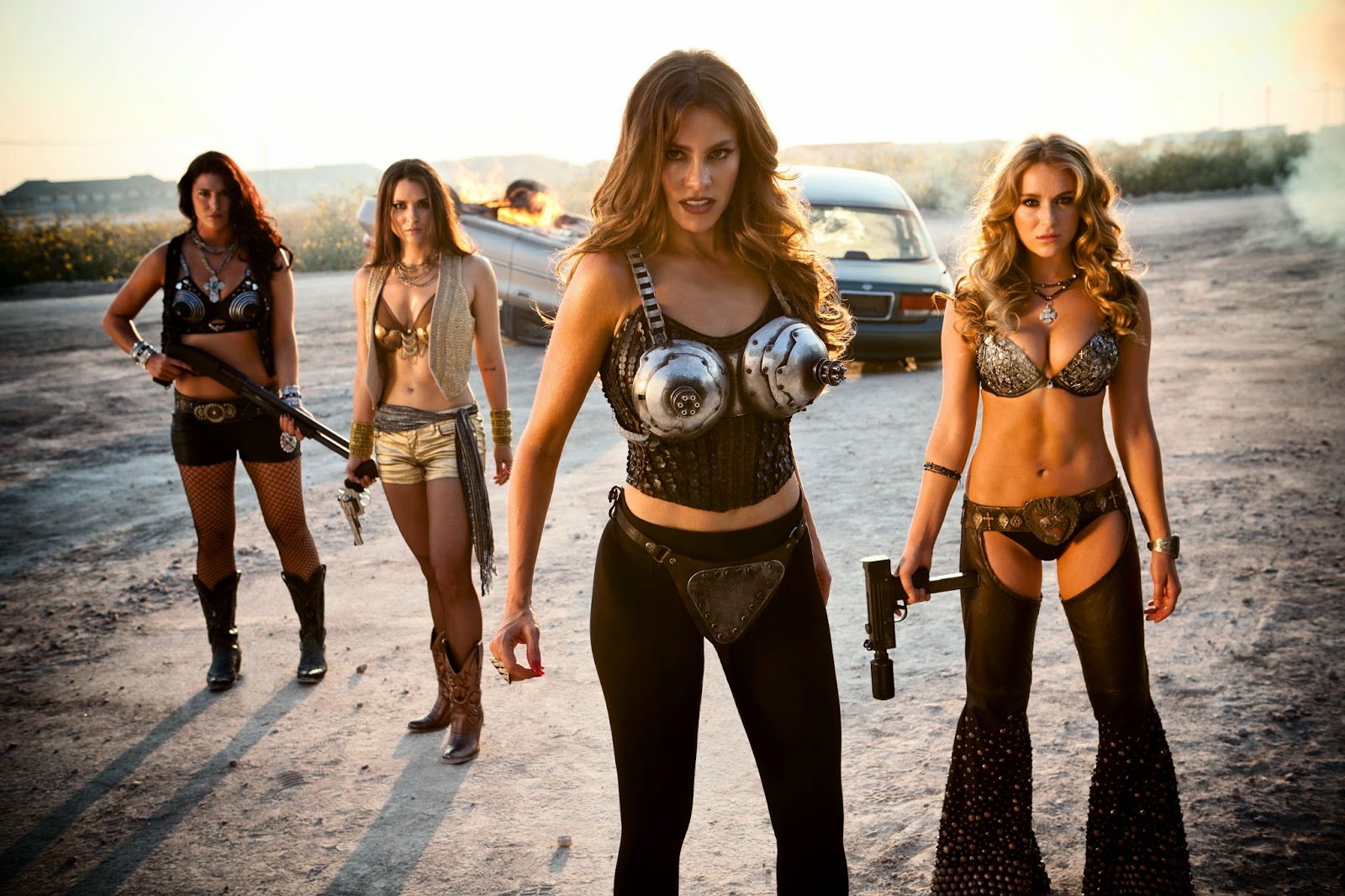 Now, I happen to like my movies fun (when it's deliberate). And I happen to be a big fan of Robert Rodriguez. He's one of the most tactical and ingenious directors in the world today. Not many people can do what he does, the way he does it. You always know when you're watching a Robert Rodriguez film because they're a blast, and because they're always stuffed with all-star casts, as well as some sweet visuals.

Such is the case with this motion picture. Having liked the first "Machete" film, I actually made the mistake of letting the naysayers get into my brain when all the negative feedback for this movie came out. However, I didn't let that deviate me from seeing it. And I'm glad, because I made the right call. Now, I actually like "Machete Kills" more than the first film! I rented it from the nearest redbox after reserving it online, and I ended up watching the film three times as well as the bonus stuff before I returned it the next day. Then, I went and rented it again a few days later to watch it with my dad, who also loved it and wants to own it.

This film really stepped things up a notch, creating more deadly foes for Machete to fight, such as Voz, played by Mel Gibson. Gibson does a really good job at playing this role. It's not the best role he's ever played in, but he's awesome in this one. There's a lot of humor from all characters, even the president of the United States, Charlie Sheen. There's a lot of laughs all around, and if anything, Rodriguez did make this film more of a parody than the other film, but it's so cleverly well done that I can't help but think it's a really cool movie.

The fight scenes and gore are a plenty! Again, Machete finds creative new ways to butcher his enemies, using an array of weapons from defibrillation, to his trusty weapon of choice, the machete. I particularly like the scene where Machete a character's intestines into helicopter blades for a gruesome outcome. I won't say who meets this brutal demise to save it for those who've yet to see it. 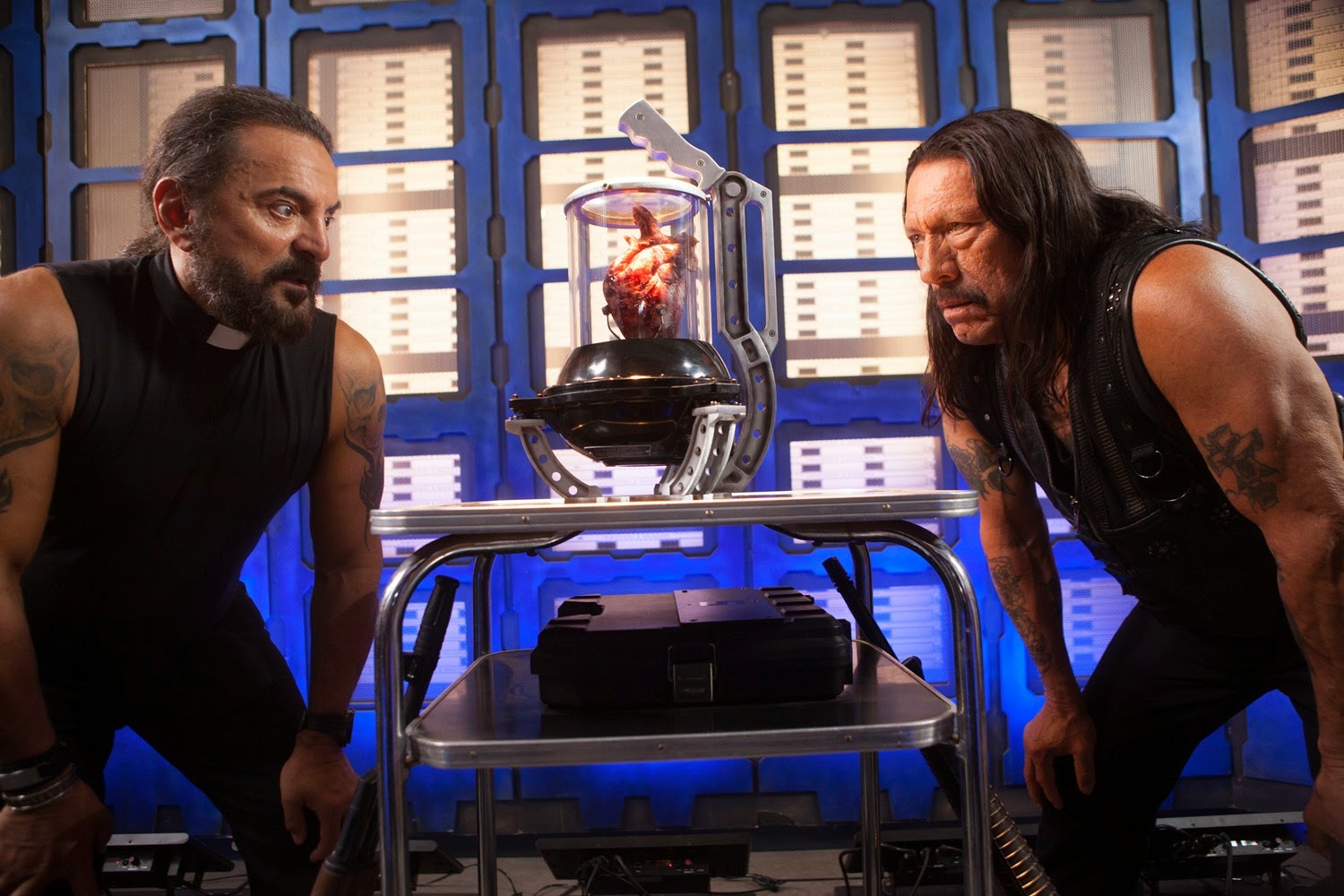 Seeing Machete on his new journey, and getting to see new sides of the character is always going to be a good thing, and not a bad thing. I really enjoyed watching Machete do work and wipe people out in unheard of ways. I also liked seeing such a great female cast, such as Jessica Alba and Michelle Rodriguez, who reprise their roles, and the addition of Sofia Vergara and Lady Gaga. It looks as though Robert Rodriguez knows that having a bad-ass female cast definitely bumps a movie up to a new level.

It's not just the ladies that are great though, because the casting all around is superb. You've got Demian Bichir, Antonio Banderas, Walton Goggins, Cuba Gooding Jr., and last but not least Tom Savini. Now take all of them and add to them Danny Trejo and the great job he does of playing Machete, and you've got a winning combination in my book. Also, the fact that all of these actors and actresses are in this film and are playing such radical characters, shows how much of a sense of humor they all have. You can tell they had fun making this movie, and that helps make the movie fun for the viewer. That is of course, if you're not judging this next to "The Godfather", and actually understand what kind of movie this is.

If you make a motion picture that's supposed to be taken seriously and it only achieves the fun and entertainment value to audiences, then the film failed. However, if you make a movie that's supposed to be an over-the-top cheesefest with lots of laughs and cool action, and it's received by audiences as fun and entertaining, then you did your job as a director. Such is the case with Robert Rodriguez and this flick.

Nothing really bad to say about this one. It's not the greatest film I've ever seen, but damn if it isn't fun as hell, and guaranteed for another couple dozen watches. 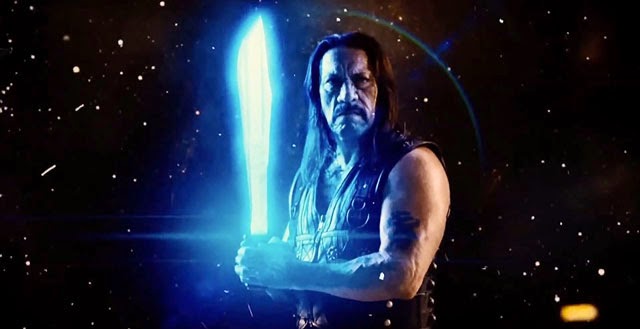 I can only hope and pray that "Machete Kills Again...In Space" gets made. Seeing as this one made nearly four times what it was made on at the box office, I'm sure the third installment is a go. Also, from what I've heard, it may already be filmed! One can only hope.