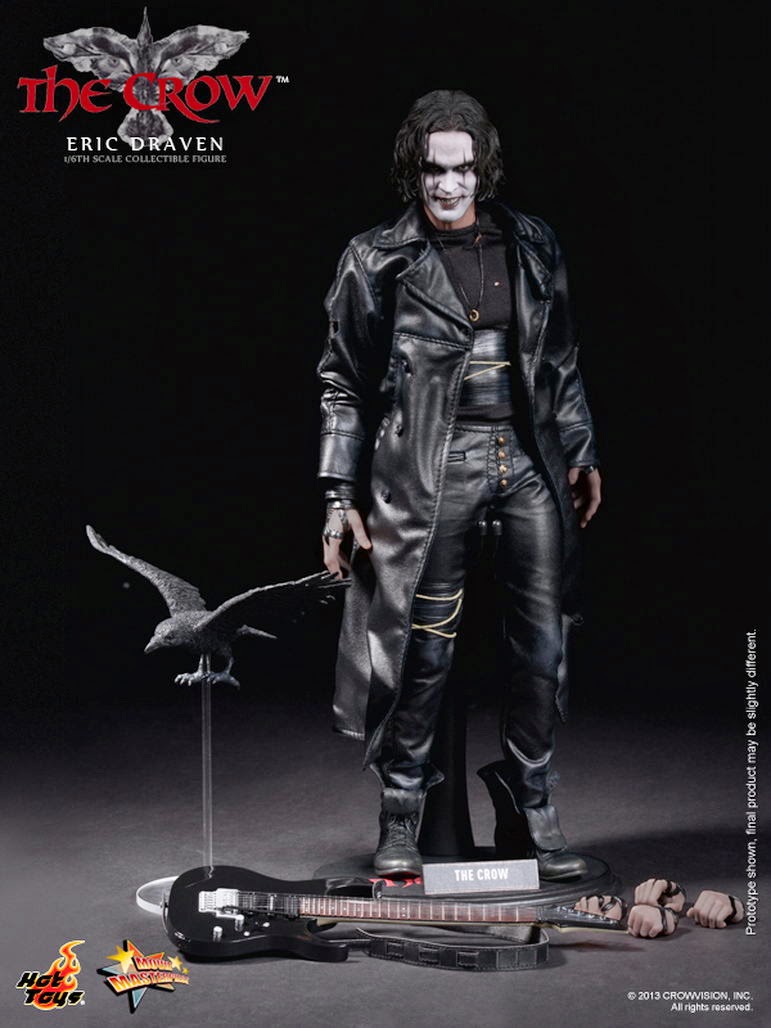 Now, although I do despise the crowd it's become appealing to thanks to stores like Hot Topic, "The Crow" has always been one of my favorite films. I'd say it's in my top four of all-time. I saw the film back in 1994 when it came out, and although I was rather young at my age to be seeing such a dark and graphic film, I fell in love. 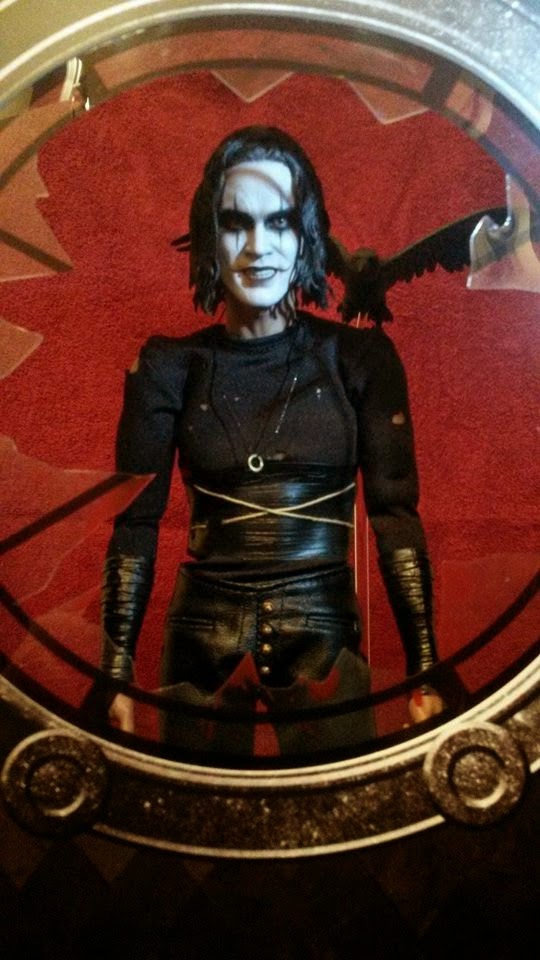 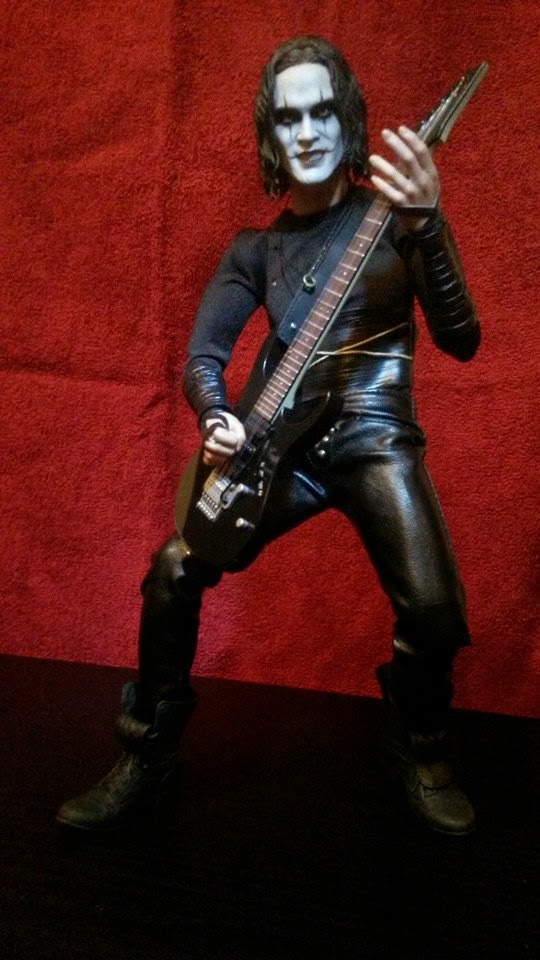 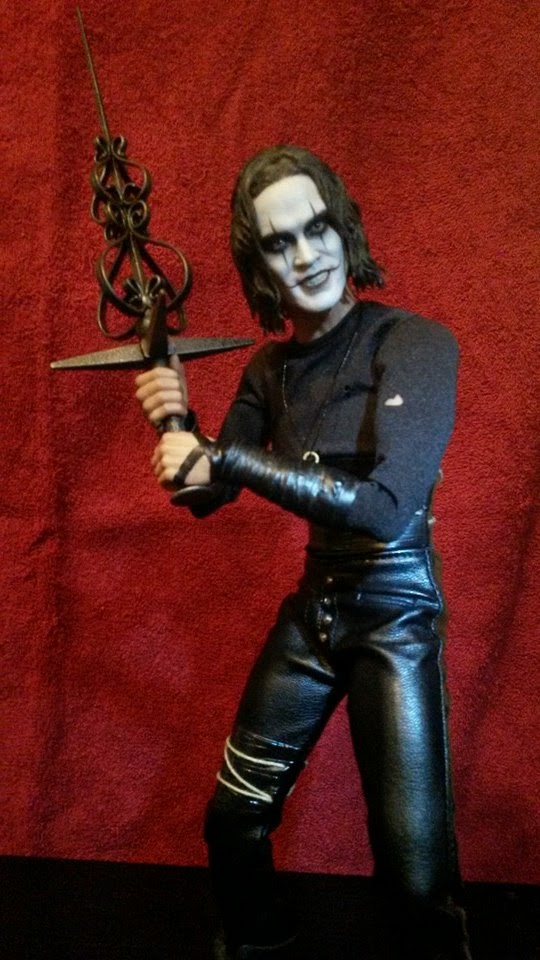 Something that most people know about me is that I'm a big collector of movie stuff and high-end action figures. If you're gonna spend, might as well spend big, right? Well, after about 12 years of collecting, and finally a worthy figure from "The Crow" has been unleashed by none other than the mad people over at Hot Toys. So of course, naturally, I purchased it. If you knew me, you'd know how much I have to have this figure. This marks my 12th Hot Toys figure too!

Now, I heard some complaints around the web about things that some people don't like about this figure, some of which I can understand, some of which I don't, and disagree. You gotta understand that there's just some collectors out there who you cannot please. They think that because they're spending $200 on an action figure that it's going to be a clone of the person the figure is of. That is not the case. I expect high-end collectibles that are easy on the eye and worth the money, nothing more. And that is what I've got.

This guy stands 12" tall and has over 30 points of articulation. So he's capable of just about any realistic pose you could want to put him in, which is always awesome. He also has three different sets of hands, a guitar, stand, and a crow that can either sit on him or be made to look like it's flying. And if you get the exclusive edition, like me, you get a weather vane as an accessory for if you wanted to pose him like he was towards the end of the film. 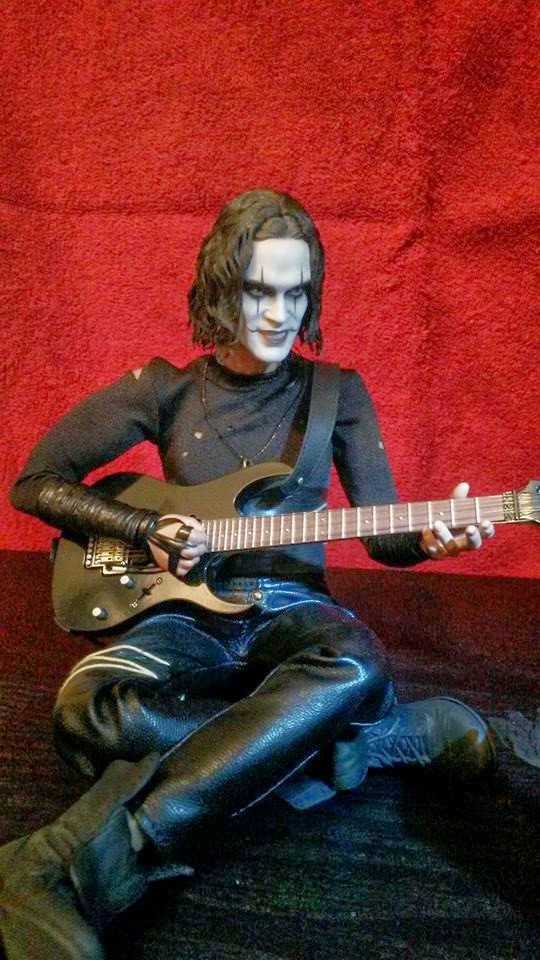 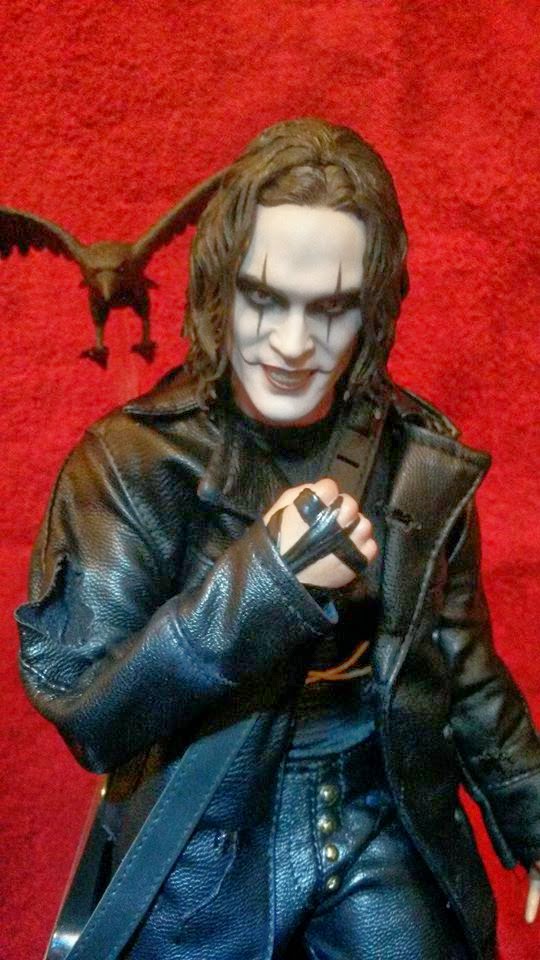 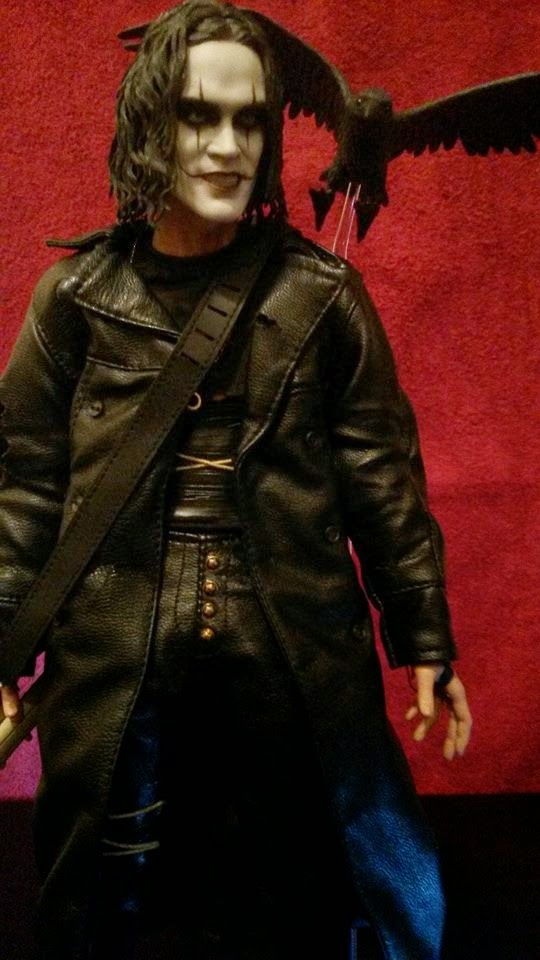 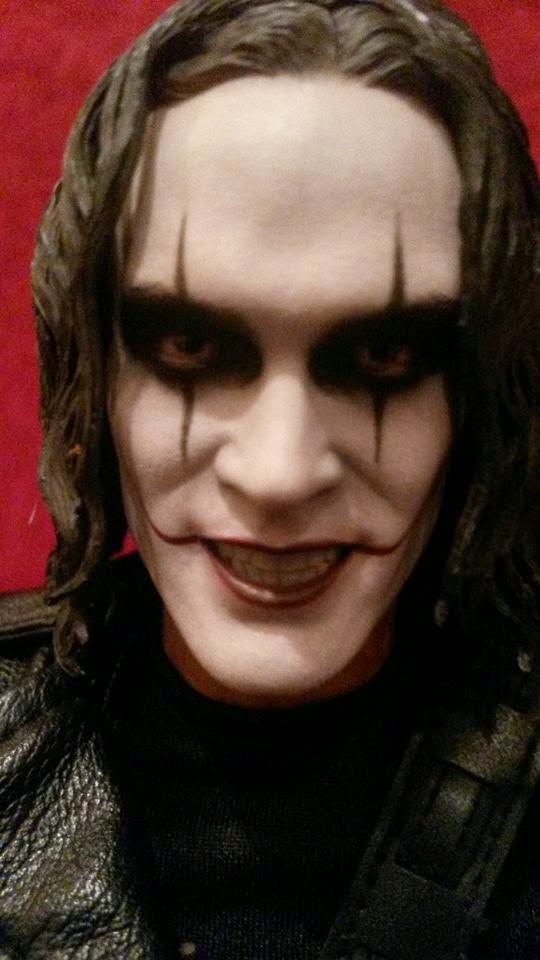 Fresh out of the box I was impressed! The outfit is spot on, and the Brandon Lee likeness is damn good. While I'll admit, and agree with others, it doesn't look as much like him as it could, we've seen better from Hot Toys. But still an impressive sculpt and paint job. And regardless, it's the nicest Eric Draven figure in the world.

I also like the crow itself. It's very rich in detail. There's very subtle things that make me enjoy this collectible, such as Shelly's ring on the necklace around his neck, and how it's actually sculpted. Up until now, all the toy companies were to lazy to actually sculpt her ring like Hot Toys did. Everyone else just puts a gold ring on a necklace, no attention to detail. And it's reasons like that as to why I collect Hot Toys.

Complaints would have to be that I'd like to have seen a more weathered look to his makeup, instead of it looking so fresh. But, I'm hoping that Hot Toys is saving that for a second figure release in the near future. Although the makeup looks fresh, the paint job is impeccable! A friend of mine who saw my figure was afraid to touch it for fear that he'd "rub the makeup off". So yeah, it actually looks like makeup, and it's applied well. I just think a more weathered look would have been great for more detail. 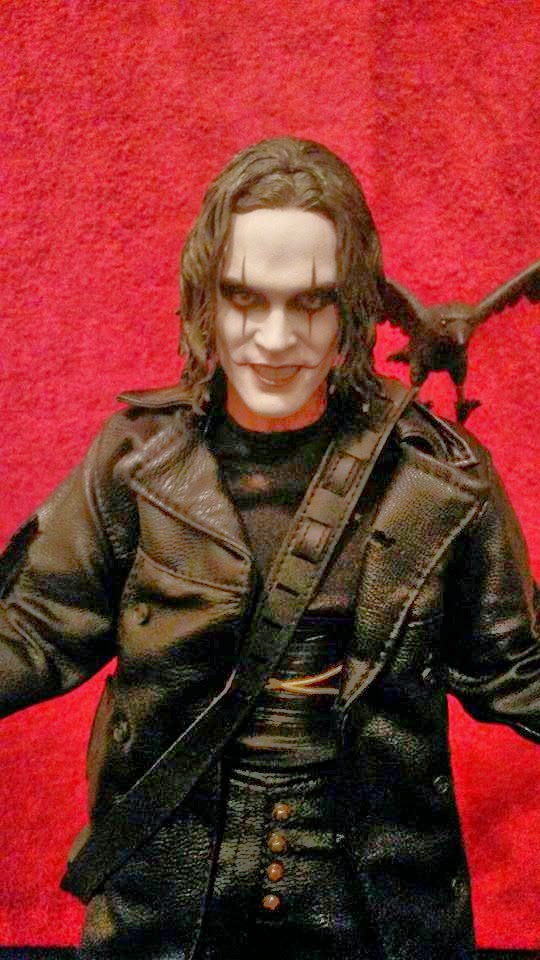 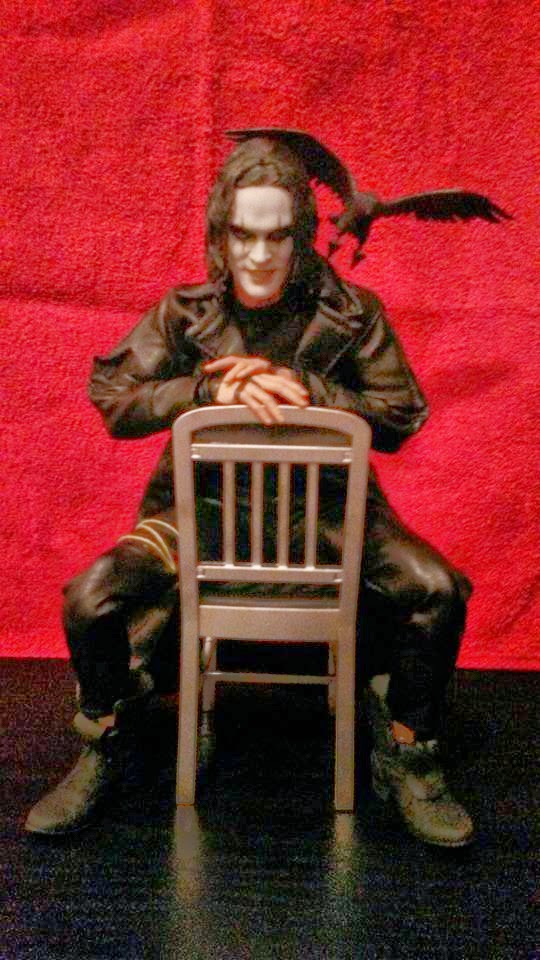 I also think that they could have gone bigger with his stand/base. Most figures nowadays get big diorama looking bases, and this one got the standard nameplate stand. Which again leaves me to believe that Hot Toys was just testing the water with this one to see how big the market is for a figure from "The Crow". It's funny, because I remember signing a petition for Hot Toys to make an Eric Draven figure years ago with a group of other collectors. And now here it is, in my hands. It's a cool feeling for the geek in me.

Anyway, if and when another figure is made, I'll be sure to grab it, just like I did this one. Hopefully they'll go a bit bigger next time. But until/if that happens, I'm just fine with this one. 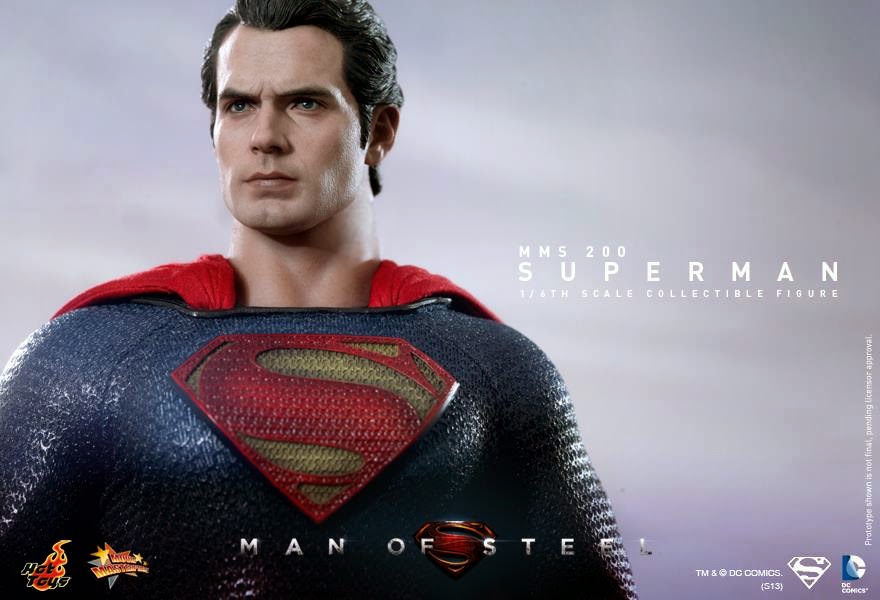