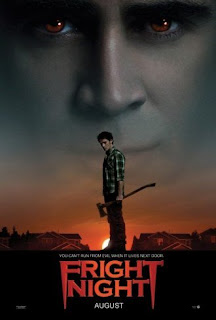 The original Fright Night is my 2nd favorite vampire film ever after The Lost Boys. So it's to be expected that I was going to be very judgemental of a remake. The original has so much to offer as a horror film, it's fun, campy, scary and just overall a great vampire flick. So many great scenes and moments from that movie. A personal favorite scene is Evil Ed in the Raggedy Ann wig acting like Charlie's mother.

So I'm pleased to say that I really enjoyed the remake. I thought the cast was great and Colin did a great job as a rugged blue collar Jerry Dandrige, unlike the pretty boy Chris Sarandon played back in '85. I liked the similarities to the original and the throwbacks they threw in, but they made it quite apparent that this was it's own movie by changing alot about the characters and the story. And the cameo Chris Sarandon made was awesome. Good to see him in this film if only for a brief minute.

The movie is basically the same with Charlie Brewster (Anton Yelchin) having a new neighbor who is a vampire (Farrell). He finds out by his friend, Evil Ed (Christopher Mintz-Plasse) who has been following Dandrige around and found solid evidence to prove his case. Once Dandrige finds out they know about him and what he is he starts to destroy their lives.

The weakest point of the film to me was I didn't like Evil Ed nearly as much as in the original. Overall I still like the original more but this was a great remake and I'm proud that it did the original justice.

I'd give this movie a solid 3 stars. Good flick. Trailer below.