Hobo With A Shotgun 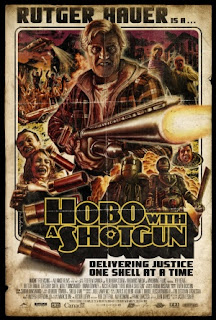 Hit up the Netflix streaming for this one, was very interested to see what this had to offer since I liked Death Proof, loved Planet Terror and thought Machete rocked.

This however was not like them both in the sense of being good and me liking it. This movie tried so hard to be over the top and ridiculous that that's exactly what it was. I can't say I expected much but this was a total disapointment. There were a few laughs to be had and the action was okay although it did have some good gore. But the acting was just awful, came off like a cheesy high school movie only with a named actor as the lead.

I can't say too many good things about this film but I will say that I'll probably never watch it again.

Synopsis taken from IMDb
A vigilante homeless man pulls into a new city and finds himself trapped in urban chaos, a city where crime rules and where the city's crime boss reigns. Seeing an urban landscape filled with armed robbers, corrupt cops, abused prostitutes and even a pedophile Santa, the Hobo goes about bringing justice to the city the best way he knows how - with a 20-gauge shotgun. Mayhem ensues when he tries to make things better for the future generation. Street justice will indeed prevail.

Email ThisBlogThis!Share to TwitterShare to FacebookShare to Pinterest
Labels: grindhouse