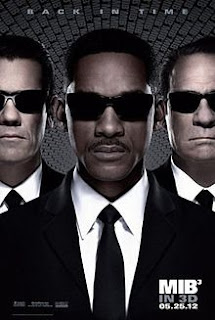 "This summer, he'll have to find the answers...in time"

Synopsis taken from IMDb
Agent J travels in time to M.I.B.'s early days in 1969 to stop an alien from assassinating his friend Agent K and changing history.

STORY: Boris the Animal (Jemaine Clement), an alien known as a Boglodite, is the last of his kind and in 1969, a younger Agent K (Josh Brolin) arrested him. In doing this, Agent K stopped the alien takeover that Boris was trying to mastermind, and in doing so all the Boglodite's were faced with extinction. Boris is missing and arm that Agent K is also responsible for.

Now Boris has come up with a new plan to escape imprisonment and go back in time to 1969 and kill Agent K, as well as follow through his maniacal plan to have his kind invade Earth and dodge extinction. Agent J (Will Smith) wakes up and realizes something sketchy is going on when he's the only one who knows who Agent K is, he then finds out that his partner doesn't exist because Boris succeeded in his plan to kill Agent K in 1969. So Agent J must travel back in time and stop Boris and warn his future partner.


However, Agent J finds that convincing his younger partner that his story is true isn't as easy as he was hoping. Agent K is weary of Agent J and suspects him to be up to no good. Agent J must find a way to convince his partner of the truth before time runs out.

ACTING: The acting in this movie is really well done and humorous. Will Smith is hysterical at several parts and Josh Brolin even has his moments. Josh Brolin steals the show with his acting, he does a perfect job impersonating Tommy Lee Jones. The acting is well done all around.

SPECIAL EFFECTS: The CG and creature effects are on par with today's standard of technology and it's nothing short of what you'd expect from this movie. The creatures are all goofy looking and have quirky personalities, like they always have. They effects are well played.

OVERALL: This film isn't anything more or less than you'd expect from this series. It fits right in with the other 2 films. It's got it's funny and serious moments and overall it's entertaining and fun, but that's as far as it goes. It's not a great film, or one of the best of 2012, it's just a blast to watch and is enjoyable on all fronts.