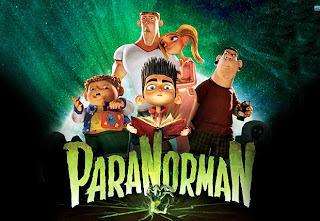 "You Don't Become A Hero By Being Normal"


Synopsis taken from IMDb
A misunderstood boy takes on ghosts, zombies and grown-ups to save his town from a centuries-old curse.

STORY: Norman Babock is a young boy who can speak with the dead, including his grandmother that lives with him and his family. Due to this reason he is looked down on by a lot of people and he's bullied in school. Soon enough Norman meets a friend at school named Neil Downe, a chubby boy who's used to ridicule and bullying himself. They get along just fine.

During a rehearsal of a school play commemorating the town's witch execution from 300 years ago, Norman gets a ghastly vision that he's being pursued as a witch by the townsfolk. And Norman's uncle, Mr. Prenderghast, a local bum, warns Norman that the vision was a sign that he will have to take up the regular ritual to protect the town. The same ritual Uncle Prenderghast has been doing up until this point. A ritual that shields the town from the witches curse.

Soon after, the small New England town of Blithe Hollow, Massachusetts is being relentlessly pursued by zombies. Norman must find the answers on how to save the town before it's too late, and that includes contacting the witch the town executed 300 years ago.


ANIMATION: The animation in this film was really good, I love good old claymation. CG is incredible and all, but it was a breath of fresh air to see a movie that went a little old school with things, though there was still some CG in the film. I liked the overall appearance of this film.

ACTION/FX: The scenes of intense action were well done, the CG looked great and I really liked how they didn't hold back with this movie. It's a horror film for children, what's not to love? It gets a little violent when the residents of Blithe Hollow strike back against the zombies, and it really puts a new perspective on things.


OVERALL: This film is funny, cute and fun. It does get a bit too serious at the end and I think it may go deeper than some kids can understand, but it's a solid film that adults will love just as much as kids. It's creepy and a good way to introduce your kids into horror, or to just have a good time with some friends. ParaNorman is a must-see for all ages. The main message in this film is acceptance and forgiveness.