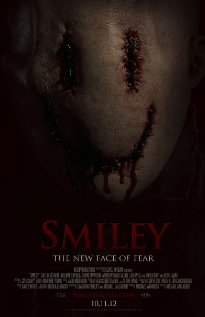 Synopsis taken from IMDb
This movie is about a girl named Ashley, as she goes to her new college while getting over the death of her mother. She meets some new people there including Binder ('Shane Dawson') while at a party and she learns about an urban legend of an online killer that has the nickname "Smiley", who can only be seen on the web. He apparently kills people after they type in "i did it for the lulz" three times. Soon after going to the party Ashley and her flatmate Proxy go online to test it out with horrific results. She becomes paranoid and she starts to think she sees Smiley all over the place and feels he may be chasing her, but how can that be if he is not real? Have they somehow released him from the internet?

Smiley is a limited release just hitting select theaters, video and streaming. It will hit DVD and Blu-ray in early 2013. It opened to alot of criticism and negative reviews.

I didn't know to much about Smiley, I tried to stay away from spoilers and read several reviews about it that piqued my interest. So I went and had to see it for myself.

Right of the bat I smelled horrific acting, I could see what kind of movie it was going to be. It reminded me strongly of the "Urban Legends" series where it attempted to be hip but tried to maintain that feel of a slasher film. And this film did a somewhat decent job of that, although I wouldn't say it's necessarily better than it's elders. It also reminded me heavily of I Know What You Did Last Summer, and thus making it easy to see the type of audience this film was aimed at. Teenagers. 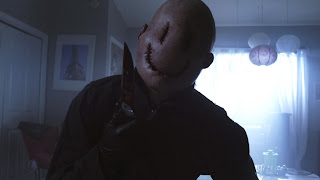 The fact that it's a teen-horror flick doesn't automatically make me turn my back or judge this film in the negative, I just know that most movies like this are quite awful. I will watch any horror movie and give a fair assessment, that's how you find diamonds in the roughs.

Smiley got my interest because despite the acting I was wanting to know what the story was with this guy "Smiley". The film had a fairly decent start and got a jump out of me. The mystery behind him, is he supernatural? An Urban Legend? Human? Human makes sense but how can he just show up at anyone's house instantly to kill them? 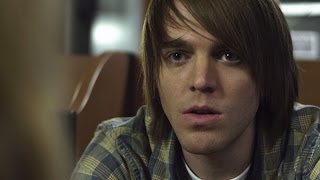 When Ashley (Caitlin Gerard) first sees the Smiley video floating around on the net she instantly becomes obsessed and paranoid. She starts to see him everywhere.

Weird things start to happen as people start to die around her, showing up with Smiley videos online. Her friends start to turn on her and blame her for the weird happenings. They think her prowling and digging into Smiley has brought the evil to them and they want her to stop looking for answers. 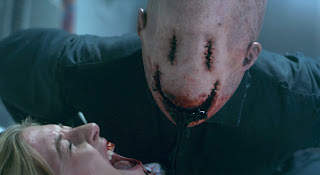 Ashley can't live without knowing, she has to know if Smiley is real and if he's following her. This becomes a cat and mouse game for Ashley's life and sanity.

The jumps and scares in this movie are fair. There's a few jumps along the way, but the movie feels like a cheap Scream (1996). The kills are good, somewhat mediocre, and not very gory.

Finding out the mystery of Smiley was clever, but the ending falls into being cliche. It's like they're giving you what you were expecting but trying to be accepted anyway. I liked the way it was done in this film, but this film had so much potential to be scary! It's a good concept somewhat and I appreciate the internet aspect of this film, however, I think they went with what would be cool and hip over what would make a great horror film. Bloody Disgusting said "took a strong, modern idea, over-thought it and turned it into a generic '90's movie that'll have you throwing popcorn at the screen." 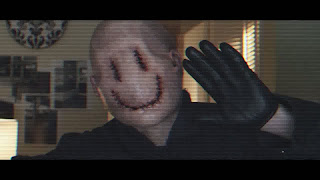 Smiley delivered mild scares, some laughs and some jumps, but it didn't hit it out of the park. This was a second baser at best. It allowed you to see to much of it's influences and it came off like you rented a straight-to-video teen-horror movie, which I guess essentially it practically is. It tried to be a slasher film and almost had the feel right, but it was off.

On another note, Smiley was very entertaining and the fact that this film had so much potential kept me watching. In my eyes it wasn't as bad as some made it out to be. It kept you entertained and is what I consider a "popcorn" film, where you sit on the couch with a girl and some popcorn for a laid back and relaxing evening. 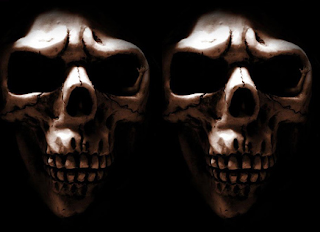