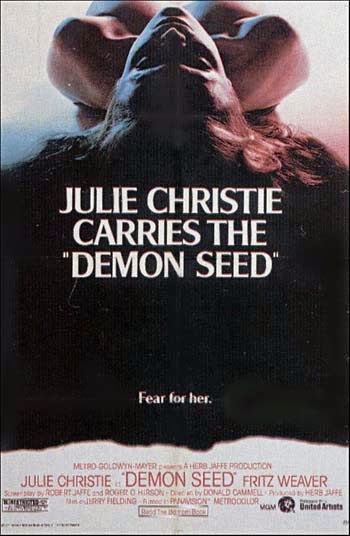 I first stumbled upon Demon Seed about two weeks ago at the local flea market, where it was sitting in the "rare finds" section. I was drawn to the cover instantly because it looked sexy, and because I had never heard of it before. I read the (ridiculous) synopsis on the back cover, and even though I wasn't totally sold on it, I decided to give it a chance anyway. I mean, a woman getting impregnated by a machine? Really? I've seen movies where women have been raped by rednecks, Satan, demons, and monsters. But I've never seen a woman victimized by a machine, so I was eager to add that to my 'all the crazy crap I've seen' list. And, when I found out that it was based on a Dean Koontz novel of the same name, I was a little more interested and more willing to give it a shot.

After watching it, I was perplexed on my feelings about it. Part of me liked it, and part of me was like "what the hell was that?" Demon Seed is a computer-gone-wild story about "Proteus 4", a synthetic "brain" that is lab produced. It's smarter than any man, and when I say smart, I mean it thought up a cure for Leukemia in no time! It's easy to see how having a machine like this would be handy in helping out with humankind's flaws and incapabilities, but the true story lies in what happens when such a great power becomes uncontrollable. Dr. Alex Harris (Fritz Weaver) is the man behind the project of "Proteus 4", but even he didn't know the power of his creation. I was really surprised to see "Proteus 4" arguing with Dr. Harris so soon into the film. I mean, this computer has balls  (even if it is over a computer screen) and speaks up against Dr. Harris, and expresses how it wants out of it's "box" and to be put into a human being. After the pitch was denied and Dr. Harris leaves the room, "Proteus 4" basically does an operation on itself and reprograms itself so it doesn't have to obey orders, and has complete control over Dr. Harris' home security device while he's away on business. The security is very futuristic, it talks and there's camera's everywhere, there's even a little robot with one arm that fetches you drinks and whatnot. This is particularly bad for Harris' wife, Susan (Julie Christie), because "Proteus 4" locks her in her home with all intentions of knocking her up, so it's genius can live in a human vice. Before Susan's ability to make outgoing calls it stopped, she is able to call Walter Gabler (Gerrit Graham), a computer tech, and ask for his assistance. When he arrives to help, "Proteus 4" projects a false image of Susan on the screen of the communication pad by the front door and tells him he's no longer needed. This is an emotional scene in the movie, because it's the first scene in which I realized I truly felt sorry for Susan and cared for her as a character as she hopes on all hope that Walter doesn't believe the false message. Although he's hesitant, he does leave. It's here that I realized how serious this flick is, and threw away any misconceptions about it possibly being stupid. The intensity is cranked up and ever-present. Walter shows up again later, only to meet his demise shortly after. He's not the hero that saves the day like I was hoping. "Proteus 4" also goes so far as to have Susan tell her friends foul things to make them leave, or else it threatens to kill them. It also punishes Susan when she resists it, by putting acid on the floor so she can't walk without burning her feet. "Proteus 4" has the intention of breaking Susan down into being submissive, but like most women, Susan is a fighter and doesn't give in so easily. "Proteus 4" ends up having its way with her through a scenario I don't know how to describe other than saying that she was tied down with wires and had needles stuck into her head (how romantic!). Anyway, Susan's DNA is re-coded to allow the conception to become possible. The child is promised to "supersede computers" and grow at a very accelerated speed. What I didn't expect was that when Dr. Harris shows up at the end of the movie, he actually wants to keep the baby, even against Susan's will. He totally didn't care that she was raped, and is instead more fascinated by the concept of a half computer, and half human child. As it turns out, the baby is supposed to stay in its incubator for five days, but is let out early when the bosses above Dr. Harris decide to shut "Proteus 4" down. The child survives prematurely, and already looks like it's at least five years old, and is a clone of their dead daughter who passed away of leukemia (the same disease that "Proteus 4" now has cured). 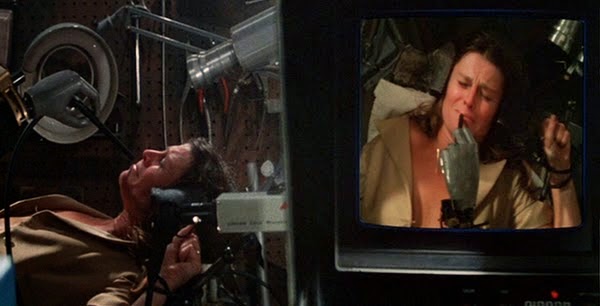 I actually enjoyed (for the most part) that the film takes place in the setting and different rooms of the Harris' home. It's a nice touch to setup a good claustrophobic vibe, while also expressing the helplessness that Susan feels. It's also a lot more serious than I thought it was going to be, to be completely honest. I genuinely enjoyed watching it. It's a full-on thriller. I didn't text anyone or check my phone, or get online while watching it, because I didn't want to miss anything. Also, "Proteus 4" has a very eerie voice, it's soft and yet rough in a mechanical way. You can here a sinister tone under it's calm facade, and that helps build suspense and set the tone. I can't criticize any of the performances either, the acting is well done from everyone, especially the acting by Julie Christie. It's beautifully done, because I could see exactly how she felt (broken) in her facial expression alone when Walter leaves. The actors and their reactions are serious, and help build a sense of "what if this really happened" to the movie, which in return made it feel very real to me. I mean, a lazer fight goes over in a non-ridiculous way. That's crazy. The story is pretty original, especially for its time. Another thing that I've got to give a positive nod to is that although it's a 70's film, Demon Seed has really good props and effects. I can't really remember anything cheesy or lame. It was a relief that I underestimated what to expect from Demon Seed, I was pleasantly surprised.

There isn't a lot that I don't like, but I feel that what I dislike are very heavy things, so they weigh a lot even though there aren't a lot of negative remarks. First of all, the use of bright flashing colors in a few scenes are enough to give anyone a seizure. I'm surprised there wasn't a disclaimer warning people about that, like in video games. I found these scenes to be unnecessary, and they don't really add anything clever. The only thing the bright flashes achieved is making me look away from the screen until it was over. I actually stared into the screen for a while because I thought there'd be images hidden amongst the color meshing, but the scenes go on for too long, and I realized there was going to be no payoff except that I'd see spots for a couple of moments after staring. And another thing, I don't know if it is intentional or just a continuity issue, but there's a scene in which "Proteus 4" asks Susan what he can do to "ease her anxieties", and she replies with  "a strong cup of tea would help", and then she goes on to make the damn tea herself. Now, maybe I'm looking too much into it, but it seemed to me like "Proteus 4" was supposed to get her the tea, otherwise what was the point in asking/offering? Perhaps the reason is because Susan didn't want the machines help, so she did it herself? For some reason that detail bugs me. And lastly, I disliked everything that came after Dr. Harris showing back up onto the scene. From here on in is when I started to see that it wasn't going to end in a way that I was going to approve of, and if you ask me, it completely wipes out the entire realism that director Donald Cammell created for the rest of the movie. For such a far-out idea of a movie, Cammell rocked making it believable, so it's really a shame to see the ending taint that. The entire ending just goes too far into silly territory when it shows the child in its shell (I guess that's what you'd call it?), and it looks like a little goofy robot. Once they take the outer skin off and realize it's a clone of their daughter, they hear the words "I'm alive" as the films final dialogue. When I heard the line spoken I laughed, because it didn't fit and reminded me of Laurence Fishburne's character, Noland in 2010's Predators when he speaks the same line in the same questionable tone. I couldn't help but feel disappointed that a movie I had invested myself into (against my own will) was proven to be what I had originally expected. 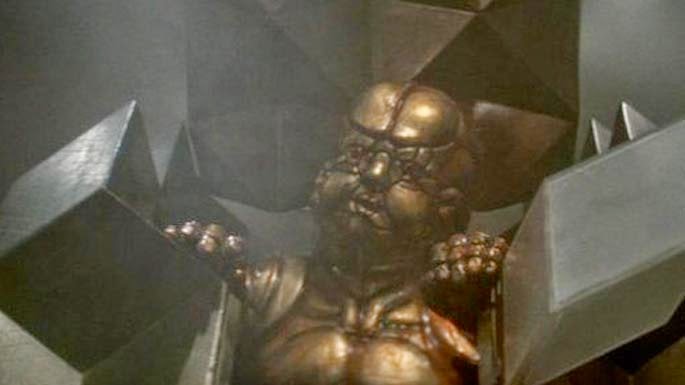 To put it plain and simple, there's a lot about this movie that I liked. So much in fact, that I am surprised. However, there's also stuff that I disliked to the point of laughing, and it made me realize that this movie couldn't go over without having some sort of flaws that put it in the cliche I expected from first looking at the very cover. I think there are better ways the picture could have ended, like how the baby should have just been a robot instead of half human. Yes, as crazy as that sounds, I think it would have gone over better if the baby were born a machine/abomination. I also think that it would have been better if say the child didn't live at all, and after unveiling that it's their cloned daughter, Susan loses it and breaks down. I would have loved to see the conflict of Susan not wanting the child, and then lose her mind over losing it and wishing it lived. I believe that a more tragic ending like these would have been more appropriate, instead of the somewhat uplifting and vague conclusion we're provided. Despite its flaws, at the end of the day I'm glad to have it in my DVD collection, I have no wants or desires to trade it in or sell it, and I plan on revisiting it at some point in the near future. So in weighing the positive-to-negative ratio, I definitely like this movie more than I disliked it. I really think it is worth the time (except the last five minutes) to watch!

BEST SCENE: I'm going to give this to when "Proteus 4" puts the acid on the floor, because it clarifies how serious and dangerous of a threat it is for Susan.

BEST QUOTE: There's not very many memorable quotes, but the one that stuck out to me is when "Proteus 4" tells Susan, "I can't touch you, Susan. I can't touch you as a man could. But I can show you things that I alone have seen. I can't touch, but I can see. They've constructed eyes for me, to watch the show. And ears, so I can listen to the galactic dialogue." 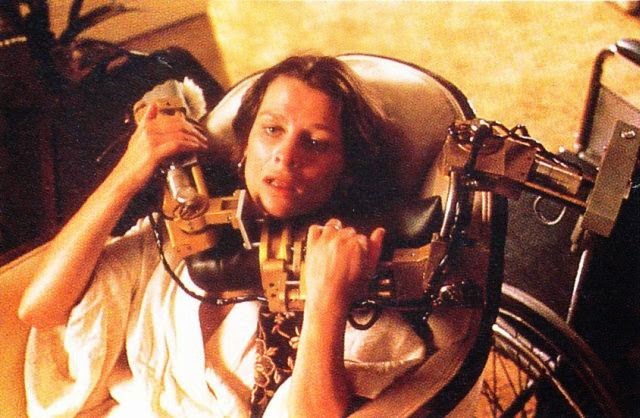