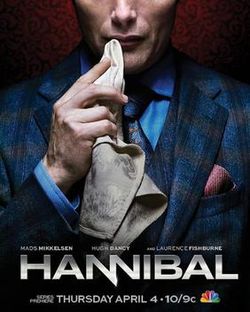 BEFORE I GET TO MY REVIEW, LET ME ANNOUNCE THAT HANNIBAL'S 4 EPISODE WILL NOT BE AIRING NEXT WEEK DUE TO THE BOSTON MARATHON BOMBING. THE EPISODE WAS TO BE ABOUT CHILDREN KILLING THEIR PARENTS AND NBC FOUND IT IN POOR TASTE TO AIR IT SO CLOSE TO THE TRAGIC INCIDENT IN BOSTON. I'M NOT CLEAR ON IF THEY'LL SKIP NEXT WEEK WITH A FILLER EPISODE OF ANOTHER SHOW OR A REPEAT. THEY MAY EVEN JUST JUMP TO EPISODE 5.

I've been away for a while so I haven't been doing reviews up until this point for Hannibal even though I've been watching. Better late than never, eh?

I'm a big Thomas Harris fan and an even bigger fan of the Lecter. I read all 4 Hannibal books in one month, non stop! One after the other after the other with no breaks. I liked The Silence of the Lambs the best and thought Red Dragon was a close second. So yeah, of course I'm watching the show and so far I'm thoroughly enjoying it.

This episode centers around Jack Crawford's theory of Abigail Hobbs having helped her father in the murders. Will Graham reluctantly looks into it and Abigail wakes up from her coma. Will takes Abigail to her old home in hopes of bringing back memories of who helped her father. All the while, it's obvious Hannibal was the one helping her father.

Upstairs, Abigail sees blood and goes to investigate and discovers her neighbor Marissa impaled to a wall. The brother of the impaled girl is inadvertently stabbed by Abigail in what wasn't self defense. Lecter cleans up Abigail's mess in a blackmail exchange that she doesn't give away his secret as being her father's mentor.

I'm interested to see where this is going. The thing that I really enjoy that wasn't in this episode is the therapy sessions with Will and Lecter. I really like getting inside of Will's head and seeing he and Lector's character development. However, the story in this episode was pretty big, so I understand the time restraints.