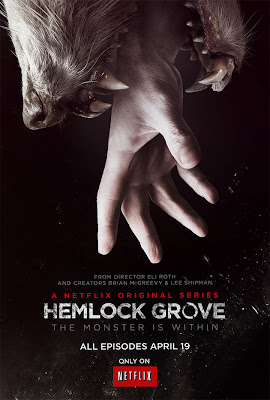 "Hemlock Grove" is a show based on McGreevy's book of the same title. It's a supernatural series that takes place in the fictional town of Hemlock Grove in Pennsylvania.

From the trailer I wasn't really sold on this show, but since I'm a Netflix hound I figured I'd give it a shot. And when I commit to something I'm in it until the duration. Unless it's Madmen. Christ almighty, I couldn't get into that show to save my life. But I gave "Hemlock Grove" the benefit of the doubt since it's yet another horror show going on right now.

The show picks up with Peter Rumancek (Landon Liboiron) and his mother move into the town of Hemlock Grove. They move into an old trailer in the woods and are instantly looked down upon for being Gypsy's. From the way Peter and his mother act, we can tell they're used to the cruel treatment and have learned to deal with it.

Roman Godfrey (Bill Skarsgard) and his mother Olivia Godfrey (Famke Janssen) are the rich and wealthy of the town. They're snobs. Roman has an obsession with blood and likes cutting himself. He has a sister who's extremely disfigured and freakishly tall. She has a blue glow to her that informs the viewer that she's not just a  deformed circus freak, there's something to her. 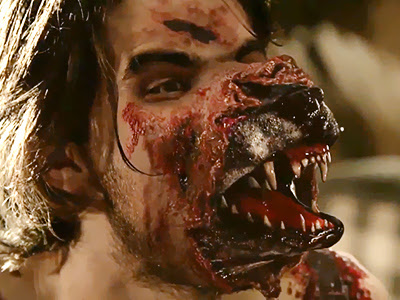 Suspicion arises all around town when a teen is brutally mangled by what local authority believes to be an animal. Instantly the heat comes down on Peter and his mother, claiming that they are werewolves. Yet again, they deal with the pressure and keep moving forward.

Eventually, Peter and Roman befriend each other and the really crazy stuff begins. I'll stop here since it's a new show and some of you are probably still watching it. It took me about 3 days to watch all 13 episodes in between working.

What I can say positive about this show is that there is one hell of an awesome werewolf transformation scene, and while it isn't an original idea I thoroughly enjoyed it. It's a true werewolf scene. Gritty and painful and they don't hold back on the gore. This idea however, was first done in 2004's blockbuster "Van Helsing".

I also like how the show is a true horror show. It's got it's pop culture touch to it, but it's definitely a non watered down version of  the CW's "The Vampire Diaries". HBO's "True Blood" still holds dominant for best show about werewolves and vampires though.

The cast of this show struggles, but I feel that this show is just getting off it's feet. The last few episodes really start to show it's potential. So hopefully if we get a 2nd season it'll pick up at a much faster pace. The story unfolds well, but still leaves you with a lot of unanswered questions.

This show certainly has it's character flaws and one of the main things I found wrong with it is that I don't really like a single character on the show except for Peter. So they need to throw some more character development in there. Too much time was wasted on the investigation of the "animal attacks" and not enough time dedicated to making the characters more than one dimensional.

"Hemlock Grove" has just begun to bare it's fangs and if we have another season I think the gloves are coming off. Not the best first season to a show I've seen by far, but far from the worst.


THIS SEASON GETS 3 REAPER SKULLS OUT OF 5