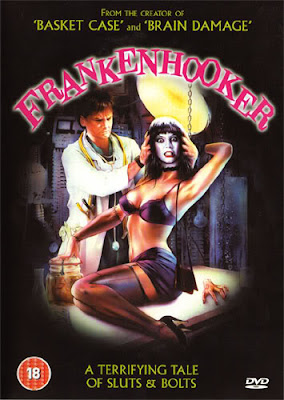 "A Terrifying Tale of Sluts & Bolts"

Synopsis taken from IMDb
A medical student sets out to recreate his decapitated fiance by building her a new body made of Manhattan street hookers.


I first saw this movie just two nights ago and instantly fell in love with it. I've seen it around before and I've heard of it, but I'd never watched it. Now, I'm very glad I did. "Frankenhooker" had all the ingredients to make me a happy man.

I love how although it's very loosely based on Mary Shelly's "Frankenstein" novel, they still throw out little homages. Like the lead character Jeffrey's last name is Franken, and his fiance's last name is Shelly, it's little touches like that that'll make me appreciate this movie. They knew they weren't making an Oscar winning movie, they were making a good, fun horror comedy.

When Jeffrey's fiance Elizabeth gets chopped to pieces by Jeffrey's remote controlled lawnmower I couldn't help but laugh. I knew from the beginning this was going to be a fun watch. The effects are so corny and cheesy, yet they're endearing. This falls right into the category of "Re-Animator" and "Elvira, Mistress of the Dark" with it's humor and entertainment quality. It's not as good as either of the films mentioned, but it's in the same class and one I'd definitely watch again, and with friends. 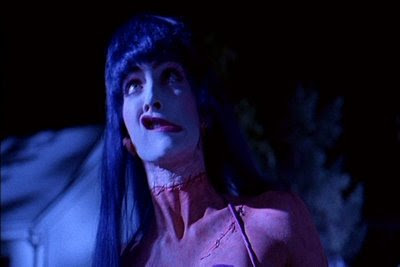 There's so many funny parts that're so memorable. One of the things that really had me going was the super crack that Jeffrey concocts in order to get the hookers high and in a catatonic state so he can take the limbs from each hooker he wants. He first tests it on a gerbil, and the crack is so potent that the little guy explodes.  Needless to say when the hookers take it the same thing happens to them, which is hysterical.  And Jeffrey doesn't need to surgically cut the hookers' limbs off because their bodies are all over the floor and in pieces. So he can just take what he wants and go.

The whole movie is enjoyable, even Jeffrey hunting her down to bring her back home. And yes, it does have an expected ridiculous and funny ending that perfectly fits this film.

Believe it or not, there's not any serious or hardcore sex scenes in this movie. It's actually not that type of movie at all, it's just got some nudity but just about every horror film does. 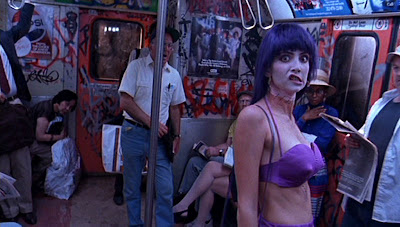 I really liked Elizabeth's look. It's cheap, but fitting and she looked cool. She'd be a very cool Halloween costume, if you've got the body for it. She was the perfect female version of Frankenstein's monster and Patty Mullen was on point playing her.

There's not too much to analyze with this movie. It's pretty straight forward and is what it is. The only thing that there is to say is that this is yet another movie that shows how playing God never works out for anyone. If anything it goes ten times worse than you can even imagine when weighing the consequences out. It's about the abuse of power men would have if we had such an ability to create life and it shows how stupidly we'd waste it. "Frankenhooker" is a black comedy that tells this story in an entertaining and lighthearted way.

I'll be buying this one on DVD or Blu-Ray soon. I must own this. I've got a few people I'm going to turn  onto this movie as well. I know they'll enjoy it as much as I have.