The Conjuring Will Scare The Hell Out Of You 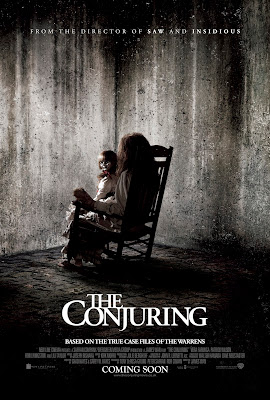 Synopsis taken from IMDb
Paranormal investigators Ed and Lorraine Warren work to help a family terrorized by a dark presence in their farmhouse. Forced to confront a powerful entity, the Warren's find themselves caught in the most terrifyin case of their lives.

I recall back in February when the eerie teaser trailer landed for this film. Now, being a horror fan, I'm subject to a lot of disappointmet, but I couldn't help but get excited and hopeful. When I saw the trailer, I was alone and creeped the hell out! And it got me really thinking that if that were only a mere scene, what would the rest of the movie offer? If you haven't seen the trailer I'm referring to, check it out.

Looking at this film from one standpoint, "Paranormal Activity" is the closest thing to a true haunting movie that we've gotten in a while. And while the first film delivered and gained sequels and a lot of popularity, it's still not that big haunting film that we've been itching for. It's been too long since we've gotten a "Poltergeist" or "The Amityville Horror", films that chilled audiences down to their bones. Although I'll be the first to admit that Amityville never did anything for me, I still respect the hell out of it. There's a difference between liking a film and respecting it.

From another standpoint, James Wan has been leaving a trail of scares behind him wherever he goes. He shocked us all with "Saw" and then, "Dead Silence" crept into our homes, mind and hearts. I've always been a fan of Wan's, and though I didn't like "Insidious", I appreciate it for being a scary movie that didn't rely on gore and nudity. He knows how to build up an atmosphere and drive in the terror. He's an incredibly talented filmmaker who can take any film and turn it around on you with good, and sometimes fantastic twists.

Going into the theater to see his latest film, "The Conjuring", I was prepared for anything. Being a fan of Wan's work, I could only imagine what he was going to do with this story, and how it would be adapted on the screen. Unlike most ghost stories, this one truly has a solid foundation and a strong, well written story with believable characters. 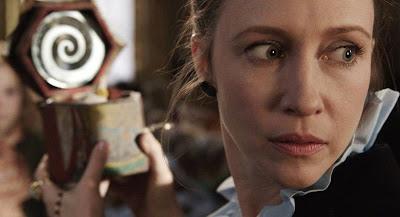 Unlike my usual trips to the cinema, I was actually looking forward to seeing this film in a packed crowd. The audience was literally screaming at the top of their lungs in terror, and then laughing aloud, then they were jumping and scared again. Best part about that? I was partaking in the commotion. It's been a long time since I've genuinely been scared, I almost forgot what it was like for a film to sit with you and still impact you even after you've told yourself it was only a movie. I'm pleased to say that this movie got that reaction.

Built around a great cast and real characters, "The Conjuring" has a story that really makes you scared of what's to come throughout the film, and has you horrified for the Perron family and the Warren's! Lily Taylor was stunning in her performance as the matriarch, Carolyn Perron. She really shows what she's made of, and I hope we see acting like this from her in the future. This role was perfect for her! Patrick Wilson and Vera Farmiga were brilliant as Ed and Lorraine Warren. I really enjoyed how the film kept it's realism by reminding us how real the characters are by showing their flaws.

The thing that I enjoyed the most, is the fact that the movie doesn't rely on cheap, quick jumps to scare you. There's plenty of jump moments, and I mean plenty, but it has a string of nailbiting suspense that starts at the very opening credits, and doesn't let up until the end credits roll. There are parts that will sit in your head and replay over and over.

The film is deeply scary when you're with the Perron family during their move into their new home. Due to how relatable they are, you're instantly in fear for them. It'll be a long, long time before I can look at a game of hide and clap again without getting goosebumps. Once the Warren's show up, things get terrfying, and I tend to not use 'terrifying' unless it's really necessary. Though the scares start slow and scattered, it's a downhill rollercoaser once it picks up, and you never know when something's coming around the corner, or what it'll be that does. When you find out why the haunting is happening, it goes from bad news to worse news.

I was pleased that this was a haunting movie that was rooted in religion, because a lot of films don't include religion anymore. And when they do, it isn't done well at all. Just look to "The Last Exorcism" to see what I mean. "The Conjuring" is unique because it manages to be both a haunting and possession film. You ride it out as a ghost film for the majority of the film, and then you're hit with a killer exoricism scene that'll make you dare to watch! The air is so tense watching that you can cut it with a knife.

Something that makes me really proud is, even though the film has hardly any gore, launguage, and no nudity, it still recieved an R rating for being so scary. If nothing else tells you to see this movie, let that be your reason right there. This is a real horror film. This is a real haunting film. This is the horror film the genre needed to wake some fans up and out of their stupor. All I can really say is that if you want to see a horror film that is good in every aspect, then you need to check this one out. If not, you're seriously missing out!