BAD MILO is a complete blast!

Synopsis taken from IMDb
A horror comedy centered on a guy who learns that his unusual stomach problems are being caused by a demon living in his intestines.

Here is a film that I have seen a lot of publicity for, even though the advertising seems scarce. I guess I was just around the right places at the right time, and I caught word. Luckily I did. I motion picture about a guy who has a demon come out of his ass and kill people? I'm all over it.

I knew I was going to like it from the opening credits. Believe it or not, if you're a cinema junkie like me, you can honestly usually tell if a movie is going to be good based on the first five minutes of it. This flick has absolutely nothing great about it, in terms of acting or story. But, it's completely awesome! The entertainment provided by this horror comedy makes it great in it's own way.

This may not be for everyone, especially those who don't like a little comedy in their horror. To me, horror and comedy are like peanut butter and chocolate, both taste delicious on their own, but together they're even better. 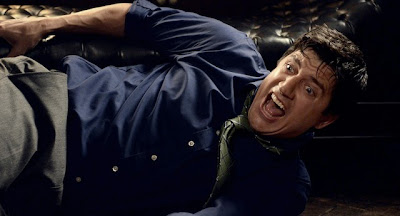 It takes almost no time for things to pick up get crazy, packed with laughs all the way. By far the best thing of it's kind since Frank Henenlotter's "Basket Case" from 1982, there's a little bit of everything to go around in this piece of cinema. The most current example I'd say this resembles is 2012's "Ted", starring Mark Wahlberg. It's every bit as immature, and every bit as touching and endearing. There's moments where I was laughing, and moments where I was a bit moved.

Ultimately, Ken (Ken Marino) puts up with so much baggage from his everyday life, that his self conscious becomes its own creature! Taking out Ken's aggression's for him by savagely murdering, the little critter is adorable and twisted. Ken names the being as Milo, a name he discussed with his wife for their future son. One of the many things Ken deals with is the pressure to have children, even though he's impotent and gets it thrown in his face almost daily.

Looking at things from a different standpoint, Milo is a creature from Ken's ass, we've established that. But, that's just a comic relief for the underlying story of the internal struggle we all have to not just blow up and take someone's head off when we're under severe pressure. Milo represents the demon in us all that we fight to stay at bay, and we're faced with the consequences and aftermath once we let that demon out. And for better or worse, it's always better to never let that hatred out, and instead move past it. Nothing good ever comes of these blow-outs except for a few moments of feeling justified but, then you usually just feel terrible once the self-righteous spaz passes. 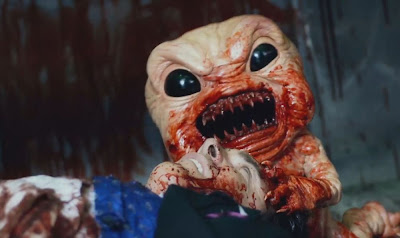 Watching this is like a blast from the past, it brings to mind memories of "The Ghoulies", and "Critters". There's as much blood and gore as there is laughs and entertainment. Regardless of any hate this film may catch, and I'm sure it will, (because a lot of horror fans love to think their opinion is law and not just an opinion), this film will be talked about for a long time. It sounds cliche, but it really is an instant classic! We haven't had a horror comedy of this caliber for a long time.

On a side note, as good and enjoyable as this film is, it's still a film that doesn't take itself seriously and doesn't expect to be taken seriously. In the end, it's a film about a guy who craps out a demon on a regular basis. As entertaining as it is, I still have to rate it for what it is.