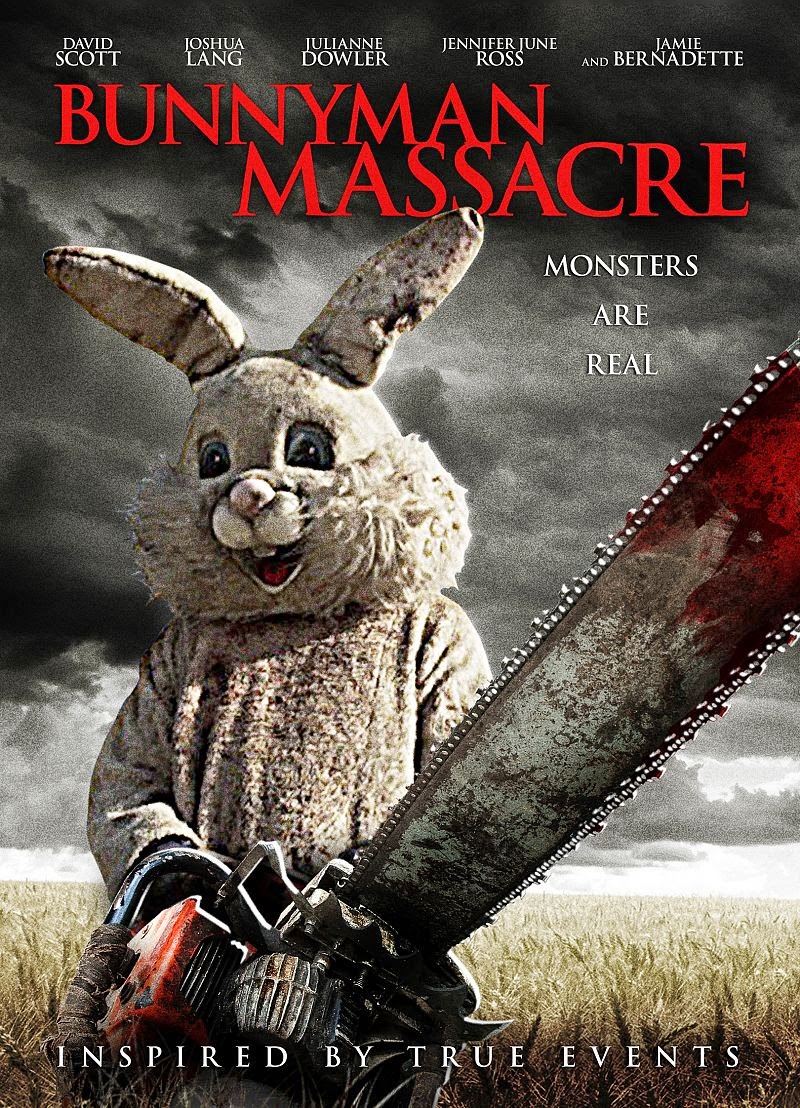 This sequel to Bunnyman (2011) is directed by Carl Lindbergh, and stars David Scott, Julianne Dowler, and Jennifer June Ross. "Inspired by true events" my ass. The only truth behind the Bunnyman Massacre idea is that in real life, some people sighted a suspicious guy wearing a bunny costume and it creeped them out. Said Bunnyman was seen only a few times (if my information is correct) and nothing ever came of it other than his loitering and having the police called for "suspicious activity". No one was ever caught or brought up on charges, yet this movie uses that concept and turns it into a wannabe The Texas Chainsaw Massacre. The film depicts a murderer in a filthy rabbit costume who kills random innocents in what are attempted to be gruesome ways. Really, this picture is just a boring schlockfest that has no original inspiration, like it's predecessor.

The plot will put you to sleep because it's one you've seen a dozen times. Okay, for example, if I were to tell you to think of and name some movies that are about a mask wearing psycho who lives on a farm and victimizes women in a gritty, low-budget setting and is also overfilled with bad acting, cheesy dialogue, and stupid characters, how many could you name? I know I could name many, but the most obvious rip-off or "inspiration" for lack of a better word is from The Texas Chainsaw Massacre, in which they even reuse the annoying photography sound clips and try and to pass them off as their own. As the story goes, the Bunnyman (Joshua Lang) lives on a farm with his brother Joe (David Scott), who not only bosses him around, but turns their victims into beef jerky that he sells at his rundown little corner store. That sounds familiar too, doesn't it (laugh)? When the Bunnyman isn't just moping around looking depressed, he's torturing and killing people. In this case, he takes on two girls who are customers at his brother Joe's store. After Joe is through being as cliche of an ignorant and rude redneck as can be, he ties up the girls, and along with his brother, they taunt and semi-torture their helpless captives. And no, not even the over implied dark humor can save this movie from sinking well below mediocrity. There are no back-able characters, not the Sheriff or the victims included, because they're all morons. If this movie had some merit, you'd likely be screaming at the screen for the characters to not be some naive and weak-minded, but there is no merit. So instead, it all just gets laughed at. If you're like me, you'll just shake your head in disbelief the whole time wondering "why am I wasting precious time of my life watching this crap?"

There aren't any kills or gore that'd constitute as a helping factor in bringing this movie to watchable terms, either. Due to the lack of budget, or laziness, or both, all of the kills are poorly executed. The ones that are up close are cut around with bad FX, and then there's ones that try to get away with murder (no pun intended) by having the on-screen kill happen a good distance away. It's like the filmmaker's tried to fool the viewers into believing that the angle these specific kill scenes are filmed at are everything but trying to avoid you from seeing how there's no special FX, and the kill weapon isn't in use. There's a specific scene where the Bunnyman has a victim on her knees, and he proceeds to take a chainsaw to her face/neck. It's the same equivalent as what kids do, where they tuck a plastic sword under their armpit and say they've been stabbed! This kind of movie trickery is unacceptable in my eyes, not just because it's unmistakably bad and obvious, but because it's child's play and can't be taken seriously. To describe these "kill scenes" in my own words would be to say they're "backyard kills"; where they look like they're filmed in someone's backyard due to lack of environmental setup and limited resources to actually pull off the killing part.

The sad part about it is, this movie lacks all of the fundamental basics a horror movie needs to work. If there was some good suspense and not just cheap thrills, and if the plot had taken a more serious and demented approach, it could have made a good product. If it were real grimy and realistic it would have been so much better, and if the rabbit costume the Bunnyman wears wasn't cute and instead was creepy, that wouldn't have hurt it any. Instead, there was no impending danger or fear, despite how corny and ruthless the antagonists try to be. It tries to be hardcore and funny, and instead it's just lame. 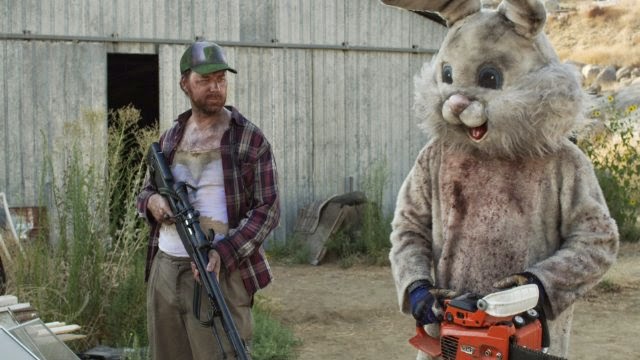 Would I recommend this? No. I hate to write reviews on movies that I virtually have nothing good to say about, but if I'm going to be honest I have to call it like I see it. I don't see a redeemable quality in this movie, and (while I'm being honest) I don't plan to ever watch it again. The biggest compliment that I can say about Bunnyman Massacre is that I was able to sit through it and not turn it off. It's not much, but that's it. If you want to sit around and play cards or talk with your friends, this would work just fine as background noise.