CURSE OF CHUCKY brings the series back with a vengeance 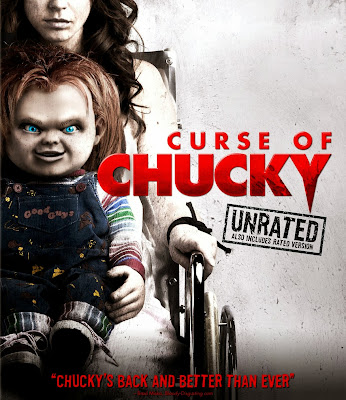 Synopsis taken from IMDb
After her mother's mysterious death, Nica begins to suspect that the talking, red-haired doll her visiting niece has been playing with may be the key to recent bloodshed and chaos.

It's been 9 years since this beloved series has been touched, and although there was some hate going around when the first trailer for "Curse of Chucky" was released, I remained optimistic. I had a strong feeling since I first heard of this film that it was going to be good, and I was right. It's great to hear such good things being said about this movie now that some have seen it! I think it's a breath of relief for most of us, because so many horror movies have a way of not living up to their hype, or simply aren't deserving of it.

Don Mancini not only wrote, but also directed this latest installment. Although Mancini takes credit for writing all of the films in the "Child's Play" franchise, this one takes things back to the way they were originally, before the series took a slight stumble down hill. While I'll be the first to admit that I liked "Seed of Chucky", I'll also admit that it wasn't a strong point for the franchise to end on. So, not only is it good to see Chucky return in all his former glory, but also to see the series go back to its scary roots and be taken more seriously than the last two sequels.

"Curse of Chucky" goes back to the opening of the original film, with Charles Lee Ray (Brad Dourif) and, rewrites the timeline and history up until after "Child's Play 3". This not only provides us with a fresh story, but also ties in very well with the original three films, forgetting Bride and Seed ever happened. Nothing drastic is changed, just enough to allow things to go in a more idealistic way. I personally think that this is the film that this series needed, and brings it back to life with a great crimson vibrance!

Brad Dourif takes up his mantel again as the voice of our favorite psychotic, murderous doll. Dourif also gets some screen time, playing a younger version of himself as Charles Lee Ray. These new scenes of him tie in directly with the new storyline for this motion picture. Brad's own daughter, Fiona Dourif is our lead lady in this film, Nica. A paraplegic who is tormented by the deadly, red-headed foe that is Chucky! As everyone around her starts to die, starting with her mother, all fingers eventually point to one suspect.

Chucky still has his sense of personality, which is laced with some dark humor and dialogue but, it never goes too far on the comedy side. As a matter of fact, truth be told, the first 45 minutes are downright scary! For the first time in a long time, since probably the second film, I was actually creeped out! The malevolent feeling is back in the blood of this series, and I love it. I really like how Chucky is very in-your-face, and hands on. It really does cast him in his old light, the way we've wanted to see him for a while. 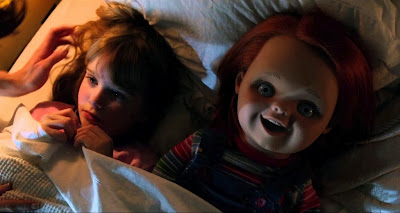 Not to mention the look of Chucky himself, which I've liked since I first saw the trailer. Despite some negative buzz going around about his new look, it holds up well. Going beyond that, the animatronics are very well done. I actually heard some people say that he "looks too real" based on what they saw in the trailers. And the thing is, they said it in a negative way. How that makes sense, I'll never know.

If you ask me, the more real it looks, the better it is. People are inadvertently complimenting the hell out of this movie based on their own ignorance. Most of those who've gotten to see it already have changed their tune now.

The kills are top-notch! There's electrocution, as well as the good old trusty axe and knife used as heinous weapons in some creative, gory kills. And it's very suspenseful. The thrill of wondering who is going to die next and how, is back and what's not to love about that? There's also two cameos that I thoroughly enjoyed, but won't mention for the sake of spoiling it for others.

I'm not sure if the ending is intended for a sequel, or if it simply capped off the series and gave it the ending it deserved. That being said, I'd love to see another installment of this quality. And seeing as they're going strong, I'd highly suggest another sequel than an unnecessary reboot or remake. I'm just glad there's still a series out there that I follow that's not going the remake route, much like the "Scream" franchise is doing. So, I hope to see promise in the future, and I remain positive. 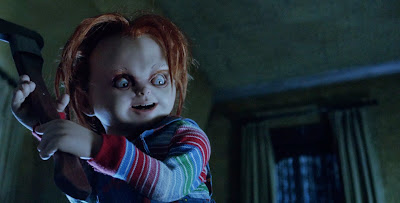 I think in the end, I'd rank this as the third best film in the series of 6. Right after the original and Bride. I actually bounce back and forth between those two. It really depends on my mood, because they're extreme opposites due to the terror:humor ratio. "Curse of Chucky" rests right beside them, and above the others.

And don't forget, stay tuned after the credits...