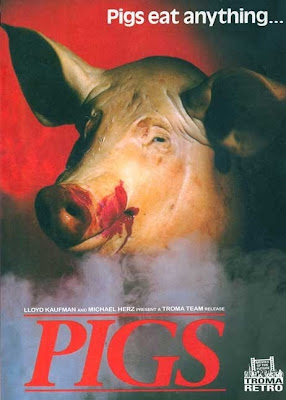 Synopsis taken from IMDb
Lynn Hart is a disturbed young woman who escapes from a mental hospital where she was committed for killing her abusive father who raped her. Stealing a nurse's uniform and car, Lynn ends up in a small Calfornia town where she meets and shacks up with Zambrini, and old farmer who runs the local motel and roadside cafe. Zambrini also owns a group of pigs that he keeps in a pen behind his house who have somehow developed a taste for human flesh. When Lynn begins killing a number of men who remind her of her dead father, Zambrini helps her out by disposing of the bodies to the pigs. Investigating the disappearances, the local sheriff eventually becomes suspicious of Lynn's past and a private investigator, hired by the hospital to find her, slowly close in on Lynn.


Surprisingly enough, I had not heard of this film until last week. I was part of a discussion where this was brought up, and it automatically sounded like my type of flick. And, luckily enough, even though I've never heard of it, it is extremely easy to find! So, I had myself a movie night and checked it out.

The transfer was very dark and gritty but, I don't mind that. I like some films more that way. I appreciate Blu-Ray and all it's technological advances it provides to our viewing pleasure but, some films just have a better effect when they're viewed in their grainy glory. For this type of movie, the quality was actually perfect. Not saying that I wouldn't wanna see it in Blu-Ray in the future though.

It gives off vibes that are relevant to "Don't Look in the Basement" from 1973, and "The Texas Chainsaw Massacre" from the following year. However, both films came after the release of this one! So one's got to think that it's possible for this to have actually influenced them? I suppose we'll never know because, this motion picture is very low-key and underground. I don't know how many people have heard of it and, as I mentioned above, I just heard of it, myself.

It starts off with some pedophilia and incest, and then murder. Lynn (Toni Hart) lives in her own state of mind, ignorant to the truth, because she's very fragile after having such horrors done to her by her own father. The sexual abuse depicted is more implied than anything. There's not much shown, and when dealing with such delicate topics, that's always a good thing. Lynn leaves to find refuge with the weird old man, Zambrini (Marc Lawrence), who locals pick on and condemn. Claiming he feeds humans to his pigs, Zambrini is always on the defense, and being an old man, he's very convincing.

Although twisted and strange, there's hardly any gore shown. It's not a bloody movie, much like Texas Chainsaw. And it doesn't need it. It's actually very effective without showing much, (the way old school films used to do) before it became the standard to show everything and capitalize on the shock/gross-out factor. But, there is at least one "holy shitaki!" moment that involves a very close encounter with Zambrini and the sheriff, and a severed hand. Even though we get the feeling Zambrini is weary of Lynn, and knows there's something off with her, he still helps her dispose of her victims. Guess he's become somewhat of a master at it. 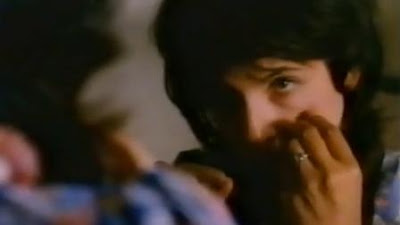 People in town say that they think his pigs only want to eat humans, and that they become the humans they eat. I'm not sure where this film was shot but, it the setting was perfect, and genuine.

Despite how much I enjoyed watching this, it still has it's flaws. For example, it tends to drag on from time to time, and get a little dry and boring. It's also quite predictable but, it's effective. And considering that it was probably released ahead of it's time, I have to give kudos. Although I like it, I have a feeling I'd love it if I were around back in the day when it was released! Coming before so many other films like it, it puts things in new perspective. And it gets a nod from me for being original, and thrilling.

The only character development we get is dialog. Even though we see both sides of both Lynn and Zambrini, there's not much in the way of growth between them, or for them individually. But, they're the type of people that you feel you know all about just by looking at them. There's a positive for all of the negatives that I can say about this movie but, that doesn't make it perfect. Really, this is just a good watch if you're into low-budget films from the 70's, and aren't looking for a masterpiece. It's entertaining, interesting, and even enjoyable.

This is definitely one I'd break out from time to time. It really would make a good double feature with "The Texas Chainsaw Massacre". If you haven't seen this one yet, go do so. It's not very long, and it's a trip into one of the finer ages of the horror genre. Not really scary, more suspenseful, you'll walk away loving it or hating it. Someone told me they didn't like it due to "lack of gore" but, that's never bothered me.

Part of me thinks I'd be more critical if I wasn't such a fan of films from the 70's and 80's, and maybe that's true. Maybe it's hard for me to be unbiased with these types of pictures, although there's plenty of films from both decades that I loathe. Either way, it's not a bad watch, and maybe you'll even get turned onto a film you didn't even know about, and like it, just like me. 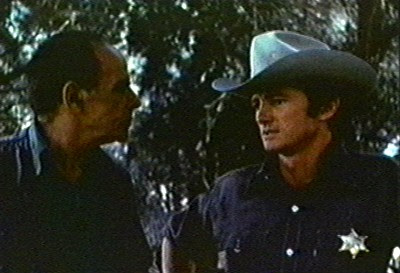 Suffering from weak plot, weird and underdeveloped characters, and some tediously boring parts, "Pigs" isn't the best thing you'll ever watch. I am a fan though, and I'm glad I was recommended this one, because it's my type of movie, at the end of the day.